Hello, MD! For those of you who don’t know my story outside of Nickelback, here’s a short introduction. My roots go back to Vancouver in the ’90s when I was a workaholic playing with three to five bands at any given time. I worked with anybody I could in the studio and live. Rock, pop, R&B, jazz, punk, metal—in the grittiest pubs to five-star resorts.

On top of this I had a fulltime job at a music store and approximately twenty students I taught a week. Talk about busy! Things really elevated my career when I met the guys in 3 Doors Down and they graciously offered me a gig on the road supporting the album Away From the Sun. And from there, we co-headlined with Nickelback. One thing led to another and I’ve been with them since 2005. I still record and perform with my instrumental band Martone, and own a studio where I record for other artists. 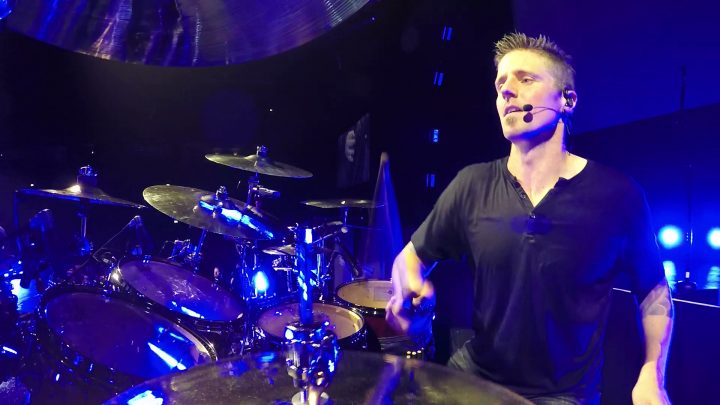 Early in my career as a professional drummer, I realized that it was a huge advantage to be able to sing and play. Bandleaders often wanted to emulate the rich harmonies found on recordings, and if you could sing lead it was even better. Giving them a break from singing a couple of songs when you’re playing four sets is worth a lot. I picked ten songs and hit the practice room, learning how to sing and play. Talk about a learning curve! I can’t recommend it enough. It made me such a better musician, and I got more gigs. If a bandleader has a choice between a good drummer and a good drummer who can sing, whom do you think they’ll choose?

My bone of contention has always been the mic stand. I sing ninety percent of the harmonies so I’m always stuck behind the mic. It always seemed clunky and in the way, and never ergonomic. Things came to a head when I started to get pain in my hip and shoulder, and a noticeable decline in my drumming skills, especially my right foot. After seeing an amazing physiotherapist I discovered that twisting your head up and sideways while playing for long periods has damaging consequences. As I aligned my body correctly with core support, everything started working again, like a reset button.

The thought of going on another world tour in that configuration horrified me! I had to contemplate the headset mic. I wasn’t very happy at the thought; I tried a clunky one for years before. I did my research and the nice folks at DPA lent me a mic, and my life was changed. Superior sound quality, no cymbal bleed, lightweight, freedom to move, and no more back pain.

I highly advise any drummer with a decent sense of pitch to start practicing singing, and once you do, don’t hurt yourself doing it! It will increase your value and make you a better musician. Thanks for reading!

For more on Nickelback, visit http://www.nickelback.com, and to watch Daniel’s drum solo from a Montreal show in 2012, look below: