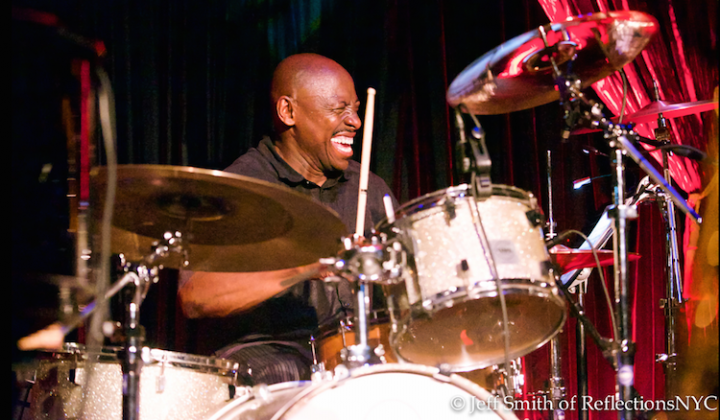 Hello Modern Drummer readers, my name is Damon DueWhite. Before I get into my background let me first thank Billy Amendola and Modern Drummer magazine for providing me with this opportunity to introduce myself to you—especially considering the circumstances under which we met.

I met Billy in what I would consider a very humbling situation. I was playing with the Peter Fish Group, subbing for the amazing Abe Fogle who was on tour with Rob Thomas. Subbing for Abe is like being in the last game of a championship series. It’s the third quarter, LeBron James has dropped thirty points, and all of a sudden he pulls his hamstring. That’s when the coach looks at you and says, “You’re on.” Don’t get me wrong. I prepared for the gig but I’m the type of person that will listen to the music a thousand times and wish I could have listened a thousand and one more times. Not to mention the fact that the very next morning after the gig I would be flying out to do a festival with Joan Osborne. So, for the past two weeks prior, I was listening to music for both gigs.

I’ve been playing drums for fifty years. My father and my older brother both played so I owe a lot of my career to them. My father was a jazz drummer—more of the swing tradition, whereas my brother was into R&B, funk, and soul. And along with the gospel music that my mother listened to throughout the week, I would say my playing was deeply rooted in the African American tradition. But that all changed once I attended Berklee College of Music. That’s when I was exposed to rhythms from various African countries and music from the Caribbean islands—all of which enabled me to play with artists such as George Duke, Stevie Ray Vaughn, Harry Belafonte, Joan Osborne, Hugh Masekela, Vernon Reid, and Mick Taylor (of the Rolling Stones), to name a few.

In closing, I’d like to offer a few words of advice to some of you who might be just starting out.

1. Be humble, and remember there’s always room for improvement.

2. Always do your homework and prepare for the gig.

3. If it’s not your gig and you’re not the leader, do what’s asked of you—if it’s something you are not able to play, work out a compromise. Suggest a different groove that could work.

4. Remember, the drummer’s main purpose is to maintain the tempo. The drums are the foundation of the rhythm. We are the glue.

5. And last but not least, as my dad always told me, always be on time for the gig.

Thank you to Promark: www.promark.com/.