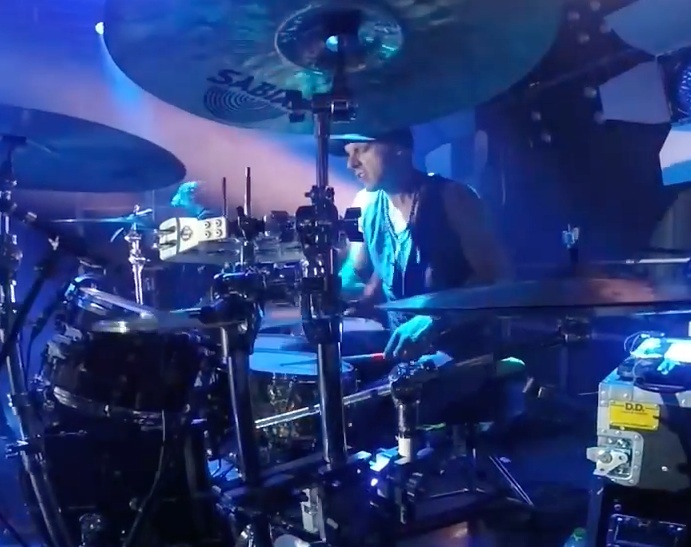 Hello, Modern Drummer readers. Whether some of you might know me from the Steve Morse Band, Enrique Iglesias, or from my last On The Beat feature, welcome! It’s been a crazy busy past two years, producing, tracking, or writing in NYC and setting up my new studio along with touring with Enrique Iglesias, Nena (“99 Luftballons”), and some others. After getting “go-pro’d” a couple weeks back in Austria with Nena’s slammin’ band I thought this would be a good time to share some video and some ideas about playing with different artists and setups.

Touring wise, I’m still the busiest with Enrique Iglesias but some breaks in his schedule mixed with some luck is allowing me to do most of Nena’s dates in Europe. These artists are drastically differently musically so I’m not using my four-tom’d, three snares, triggered up (Roland) curved bar Gretsch Brooklyn kit shown in my last On The Beat. This time, it’s a five-piece Gretsch New Classic kit with one snare, a 14×24 kick, Sabian 16″ AAX X-Plosion hats, and 2×22 HH thins among others, which fit perfectly into the fat and heavy mix of this band with the help of Beyer Dynamic mics and Evans heads.

What is similar is that both artists have many inputs in their mix in addition to some tracks (sound design, electronic drum samples, loops, vocal fx) and video content coming from the computers. Whether I’m triggering lap tops through my RME interfaces or not, I’m the guy locking the band to the computers and because of this I’ve learned to be a bit of a control freak over my monitoring situation. I’m always using UE11s with a Porter & Davies tactile monitor and always have my own high-end line mixer so I can have one or two crucial elements on separate channels, which is normally click and lead vocal separate from the overall mix. I feel it’s important not to separate too many elements in the mix otherwise you’ll end up mix tweaking instead of playing music. Having at least the click separate and within reach can often save things from falling apart should your mix somehow take a header on a TV show or festival where sound checks are impossible. I have the vocal separate for both these artists because both have very spontaneous parts of the show and I’m generally the one cueing the rest of the band for these changes—so I need the option to turn the vocal up or down quickly without trying to get a monitor guy’s attention.

Some interesting side notes; Nena signed me on as her MD/drummer in 1999-2010 and I’ve had the pleasure to see her rise many times to the top of the charts in German speaking countries, winning Echo Awards (Germany’s Grammys) and selling out arenas while being able to hire many of my hot shot friends on the records and tours. While my obligations with Enrique have kept me from many of her dates, my buddies Sterling Campbell (David Bowie) and Frank Ferrer (Guns N’ Roses) sub, so I’m in great company. The incredibly talented Derek Von Krogh is now her MD.

For the first time in Nena’s career we will be touring in the US with a half American and half German band starting with three dates: September 30, The Regency, San Francisco; October 2, The Regent Theater, Los Angeles; and October 4, Playstation Theater, New York City.