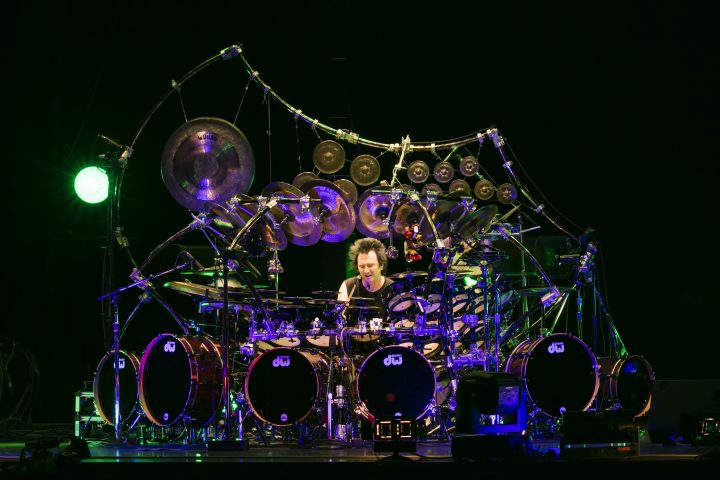 Hello my dear drum brothers! Some of you may not know who I am or what I’ve done for the past few years, or may not follow me because I don’t fit into the popular music scene much these days. Many of you younger drummers may not even know who the most important guys I ever played with were (Frank Zappa, Jeff Beck, Missing Persons, and Mick Jagger might be some of the most well known). But for the last few years I’ve been touring as a solo drum artist, all on my own with no support except for a booking agent, PR guy, and my tech (both ex-drummers).

I’m able to do this because I’m trying to play music on the drums. To do that you have to use musical elements like melody, harmony, dynamics and orchestration, in compositional forms and structures, with contrasts in feels, moods, tempo, and styles. It’s not like your or my idea of a two-hour traditional drum solo! Yes I’ve got a big kit and I have a hard time getting people to get past that “Come see the biggest kit in the world” circus act aspect of it, but does anyone ever think about why it’s big? Well, when you think of any other melodic instrument how many notes do they have? Two, four, eight octaves? To play melodies you need to have enough notes to have enough variation to play something substantial, melodically. I can do that on a four-piece kit—but only for five minutes. Two hours of the same four notes is not my idea of an audience’s good time.

So, my kit has thirty-six drums tuned diatonically and chromatically so I can play bass notes with my bass drums and melody lines with my hands (like a pianist can play a bass line or chords with one hand while playing a melody with the other). My influences are improvisational like Miles Davis, Joe Zawinul, and Weather Report, classical like Stravinsky and Debussy, and come from ethnic percussion styles worldwide.

Some people say my performance is like a spiritual experience, or evocative of film music or dreams, still others say it’s like “time traveling” (a two-hour show goes by like fifteen minutes), or I’m a “story teller.” For me it’s all about going inside and drawing the audience into my world, to try to find something beautiful or authentic or meaningful, and share it with others. I think that is the true ideal of all creative artists.

Somehow, I’ve gotten non-drummers to come to see me do this. I’m actually a bit surprised and disappointed at how few drummers come to my shows. (It’s hard to explain how I play seven and five at the same time to normal people!) Now, I say the following in all humility, because there are many drummers technically better than me in a traditional sense, and all of us have a unique soul and manner of expression whether simple or complex, but, I taught my concepts for over twenty years at clinics thinking that everybody and anybody would be doing this by next year and no one has seemed to follow me!

So, if you are interested in seeing something totally different from what anybody else has ever done on the drums, come see me. I’ll be at the City Winery, in New York City, September 25, and all over the US this fall. You might learn something new about drumming! And at least you might enjoy it like normal non-drummers. Like all of us, I do this because I must. Even if I didn’t have to work for a living I would still want to play and practice drums everyday, and I seem to have found a way to enjoy creative processes in composition and art as well. I really believe it’s culturally important (the drumset and jazz are unique American inventions), and to be honest, I think it keeps me sane.

And coming in November is the History of Terry Bozzio live concert DVD, featuring me singing and playing favorites from my past with an all-star Japanese band (Ward Records Japan: http://wardrecords.com).

For more on Terry, visit www.terrybozzio.com.