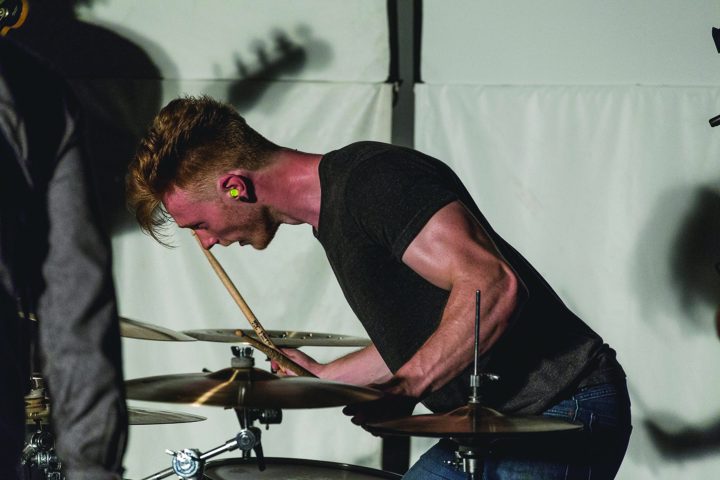 Since its debut release Lost Isles landed in early 2015, British technical metalcore band Oceans Ate Alaska has enjoyed a relatively accelerated rise in popularity. The group, driven by primary composer and chop-blurring drummer Chris Turner, currently occupies a prime spot on the Van’s Warped Tour, the long-running summer punk, metal, and alternative festival. Modern Drummer Online checks in with Turner as the band tears across the States and beyond.

MD: What’s Oceans Ate Alaska’s writing process like? The music seems very technical, and it sounds like there are many time shifts. Is that something that you bring to the writing table?

Chris: Indeed it is. I’m one of the primary composers for the band, and almost all of the rhythms, time changes, and any other weird stuff was my doing. [laughs] The writing process is very fun, though. I have a studio at my place, so normally one or two of the other members comes over, and we simply have a laugh and see what we can come up with.

MD: You’re playing at such a high level of speed on the new record. What exercises or practice routines do you use to both reach and maintain that level? And how much time do you spend practicing?

Chris: I’ve created a bunch of my own hand and foot patterns that I drill pretty intensely and systematically on practice pads. I used to practice an insane amount to keep the speed up because I did notice a significant difference with just a week off [from practicing] before. But now that I’m touring almost full-time with the band, the speed seems to maintain itself fairly easily, so now I devote my time to coming up with something new instead.

MD: Do you have any specific exercises or techniques you use to develop your double bass speed?

Chris: As far as exercises go, I like to isolate my kick drum and train almost to the point of it not even being musical anymore—it’s purely a workout. [laughs] But when I do drop back into my playing and use my training, of course it’s musical again, just without restrictions.

As far as techniques go, it’s very hard to say, as it varies drastically for everyone. The size of your foot, the tension of your pedal and kick head, and your seat height can all completely alter the way you should play. So my best advice here is to experiment with everything until you find the perfect position for you, even if it takes years.

MD: Because the music seems so technically demanding, is there anything you have to do physically, even if it’s non-drumming related, to prepare for a tour?

Chris: Outside of drumming I spend most of my time rock climbing, but I don’t do this because I feel I have to keep fit to tour. I do it purely because I love it. I’ve been climbing my whole life, and it really does continue to give me endless mental and physical challenges, as well as keep me strong. Don’t get me wrong, though, I’m still normally completely ruined after each show, especially if it’s a longer headline set. [laughs]

MD: Did you take lessons growing up, or were you self-taught? Can you describe your learning process or background?

Chris: When I was younger my dad gave me lessons to get me started. He also took me to the Birmingham Drum Centre every Saturday for a lesson there. But what had the biggest impact on me was being fortunate enough to grow up around such amazing players. They taught me strict but fun practice methods and helped me study and understand music from a very young age. I was never short of inspiration, and I’m so thankful for my drumming upbringing.

MD: Who are your influences? What do you take from them from a playing perspective?

Chris: In my opinion, Chris Coleman is the man. I love absolutely everything he does, and although I don’t often get the chance to play that kind of stuff, I still take great inspiration from his metric-modulated fills or weird subdivisions, and I apply that theory to what I do with Oceans Ate Alaska.

MD: Are there any specific parts in the Oceans Ate Alaska material where you drew from your influences?

Chris: Yes, in fact there are heavily influenced parts that shine through in almost every song on the last record. The first example that comes to mind is during the introduction of “Downsides,” where the full instrumentation of the band switches in and out of a straight- and triplet-modulated feel.

Chris: You wake up in a coffin-sized bunk bed inside a hot and sweaty tour bus, crawl out, and look for any water bottles to relieve your colossally dry mouth but find none. Next you go for a walk around the town you’re in, totally ignoring all the sights around you, as you’re on a mission to find Wi-Fi and message home. As soon as you find Wi-Fi, a message pops up from your tour manager saying you’re needed back at the venue. You get horrendously lost on your way back and get in trouble for being late. You then normally touch up the tuning on your drums, eat some local food, and then let the show begin. During the show you’ll get incredibly sweaty, only to find out there’s no showers at the venue. So you change back into the same clothes you had on yesterday, have a beer, pack up, and do it all again the next day. Well, that’s my typical day anyway.

MD: Do you have any advice for drummers or bands trying to break into the scene?

Chris: My best advice would be to not try too hard to please a certain target audience. Just write the music you enjoy writing, playing, and performing. If you’re stoked, I promise someone else will be too.

MD: Can you describe your setup? The drums look flatter compared to some other drummers’ rigs. Did you do anything to your setup to specifically accommodate your style?

Chris: My setup is arranged for me to save energy. As I said earlier, it destroys me enough playing our set, not even taking into account the hot lights and the sweaty crowd. I’d rather not be lifting my arms way up high to hit my crashes before having to quickly come back down for a fill. So I arrange everything nice and local. It makes my life a touch easier.