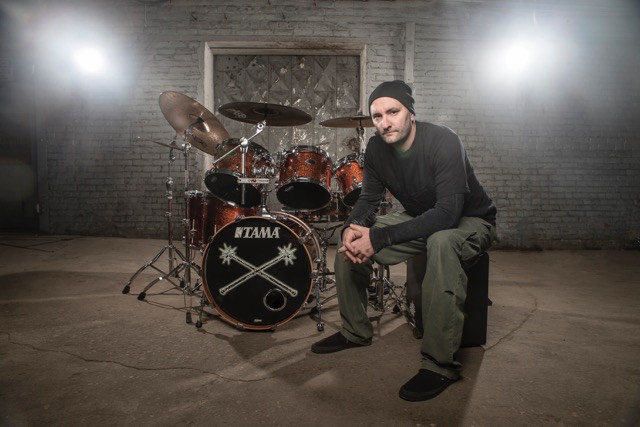 Greetings, MD family! Allow me to introduce myself. My name is Matt Byrne and I reside in the Queen City on the Hudson, Poughkeepsie, NY (located just north of NYC). For the past sixteen years, I have played drums for the heavy metal/hardcore band, Hatebreed.

During my tenure with the band, I have recorded seven full-length albums and a live DVD, toured various parts of the world, and was nominated for a Grammy. Recently, I completed the recording of our latest album The Concrete Confessional. It was released May 13, 2016 on Nuclear Blast Records. The ’breed means a lot to me and over the years I’ve worked to develop a distinct musical personality and identity in the band.

Part of my approach to doing this is through a certain level of improvisation in my playing. I don’t think it’s possible to evolve as a drummer without a bit of “free-form” injected into your playing. There is no better way to improve your chops, your timing, your confidence or your independence than by taking a couple of chances when the timing feels right. Now, this may sound utterly crazy to some of the younger, up and comers who are a bit more reliant on technology, click tracks, samples, and who practice tirelessly and strive for absolute, pristine perfection. And I’m not trying to justify a drummer being a flashy, showboat, egomaniac or song-killer either. I’m talking about translating what you do in the studio to the live setting, jamming it out a bit, and slightly adjusting what you play over and over, night after night to inject some energy and taste to the live show.

Hatebreed requires a lot of stamina and is definitely endurance music. Our songs have a specific formula that has become the identity of the band. We are a heavy metal/hardcore band; there are fast, punk parts, breakdowns, and mid-tempo jams—all played at a high volume and intensity. However, I like to approach the songs as a funk drummer or a jazz player playing within that context. That is the best way to describe how I look at the way I construct my parts of the songs and then translate them to the live setting. Just like a funk or jazz drummer, I want to provide a solid back drop for the other guys to jam over, but when it’s time for a segue or a fill or a tempo change, why not flex a little bit, do something tasty, and show some chops? It’s possible to do this without getting carried away and throwing the song and the audience into a tailspin.

To me, the jazz players are the original punk rock players. There is a structure and a solid back beat to their songs but they don’t operate by a defined set of rules within that structure. There is a gradual freeing of their parts as the song progresses, yet they never lose the listener. I find this really entertaining in the live setting because you are hearing the songs that have become your favorites but now there is a new element to them—a fresh take, some added unexpected snare roll, tom fill, or cymbal accent that wasn’t there before. It grabs your attention and shows some talent and craft on the instrument as well.

Not to worry, diehard fans. I’m not on a mission to reconstruct and desecrate any songs from our catalog that you have come to know and love for my own selfish fulfillment, nor am I going to try to incorporate Count Basie big-band parts into a crusher Hatebreed breakdown or mosh part. I’m more trying to make every song an adventure at the live show. What you get on our records and what you get at the show will always vary a bit with me and I like it like that. That’s jazz! That’s punk! There is plenty of room to stretch out, have fun, and challenge myself within the boundaries of what each song calls for while giving you guys a show at the same time. See you in the pit!

For more on Hatebreed, visit www.hatebreed.com.

Watch the official music video for the song “Looking Down the Barrel of Today” from The Concrete Confessional here: