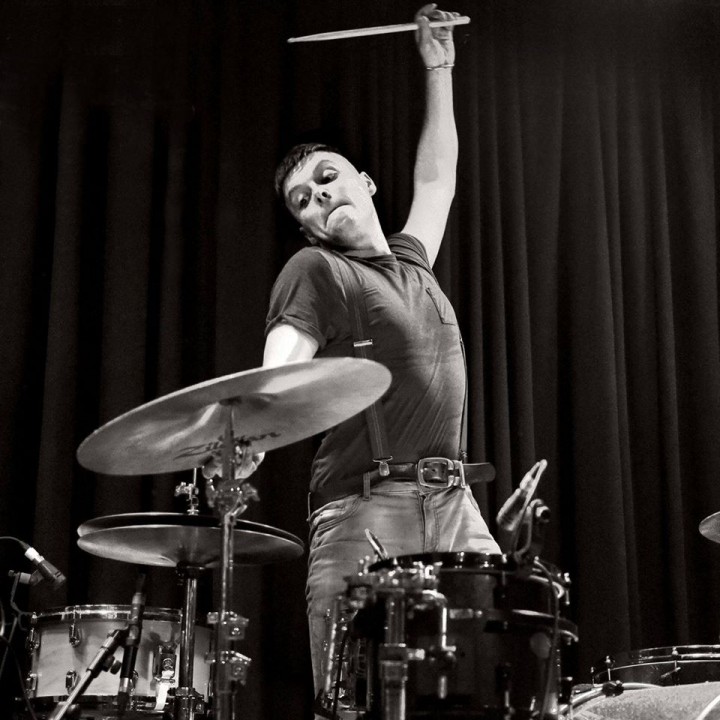 Hello MD! My name is Danny Dolan from the Virginmarys. I live in Macclesfield, England and I consider myself a drummer. My introduction to the drum world began on my sixth birthday. I remember my dad being more excited than me about the “best-ever present” he had bought—a full-size ten-piece Pearl drumkit with what seemed like a million and one cymbals.

Naturally, it was way too big for me. Even if I’d been remotely interested in drums, my feet couldn’t touch the floor on the stool’s lowest setting. But it was that day I found out just how much my dad had always wanted to be a drummer, though he’d never gotten the chance. I guess in some ways he wanted me to live his dream for him or maybe he just always wanted a drumkit around the house, but for whatever reason, I never took to the idea.

Years passed, the kit was sold, and I discovered music in my own way. Between the ages of nine and twelve all I wanted to be was a guitar player. Then, when I was thirteen years old, for absolutely no reason I can think of, I had that light bulb moment and knew right then and there I wanted to play the drums. I went back to my dad and asked if I could get some lessons. I believe his words were “you can f* off” and he laughed. I think he assumed I wouldn’t take it seriously and it was just a phase and that I wouldn’t be able to stick with the lessons. But I kept asking and asking and eventually he agreed and said he’d even buy me another drumkit—which he did—a Junior Pro three-piece kit in Nitro Yellow. There were no tuning lugs so the tones (if you could call them that) were the tones. The cymbals were still to this day the weirdest sounding cymbals ever and the snare strainer had no wires left. But hell, it was something I could smack with wood. I still have that kit to this day and it’s still my favorite finish of any color for a drum.

So I started and after three one-hour lessons I discovered that I would be forever part of the uniquely hated nine-percent minority group known as “lefties” or as I like to call us, the sound engineer’s kryptonite club.

It’s, sadly, also the reason I would only continue with formal drum lessons for only fifteen months. My first teacher was (in my head) the greatest drummer of all time. To this day, I practice the basic rudiments he taught me the second I sit down at a kit. Unfortunately, he was offered a twelve-month contract on a cruise ship so he put me in touch with a temporary teacher until he got back—although that never happened.

At my first lesson with the new teacher I remember going into a room and seeing this massive ten-piece drumkit with about a million and one cymbals. “OK, sit down and show me what you’ve learned,” he said. So I said, “OK, cool, but I’m left handed.” His face dropped and we spent fifteen minutes changing his kit around so I could start. On the second lesson I came in to find the drums set up again in the right-handed position. I picked up the hi-hat stand and started switching the kit over but before I could get to the snare my teacher said, “I’ve got an idea. In the time before your normal teacher comes back I think you should learn right-handed. That way when you revert back to being a lefty in a year or so, you’ll be a really balanced drummer.” When a thirty-year old guy says something like that to a fourteen-year-old kid, there’s really only one answer coming from the kid, right?

But here’s the thing, to me the biggest difference to learning the drums in comparison to say the guitar or the piano is coordination. I find it’s got a lot to do with re-wiring your brain to move all four limbs at the same time in different rhythms. It’s kind of like the pat your head and rub your belly thing. So in learning right-handed for an hour once a week and then going home to play left-handed I felt I was always fighting a losing battle (aside from the fact it was just a shitty idea spawned from laziness). Anyway, I lasted as a righty for about five weeks and then one day when my lesson came around I just never showed up.

My dad had been right about the lessons, I suppose, but not about the phase. The second I went it alone it completely transformed me. My brain had “re-wired” itself into understanding how the basics worked and from there my development went into overdrive. I spent every day watching and listening to anything drum related. Every time I went to a live show and saw the drummer play something that was unfamiliar to me it would be embedded in my memory until the second I got home and I’d play and play and play until I figured it out. I still do that no matter where I am or what I’m listening to. The best thing about my whole formal lessons experience (aside from don’t let people mess you around when you know what they’re saying is bull) is you can never stop learning.

It spurred me on to develop my own style and pick and choose the type of drumming I loved and thought was cool. Even in the formative years, playing with different bands had a huge influence on how I play the drums as a result of being a lefty. There were countless shows at both clubs and festivals where we’d be third on a bill of four bands only to be told, “Because your drummer is left-handed you have to now go on first.” Or even, (as has been the case for me on three separate occasions), “We don’t have time to switch the kit around so you can either play on a right-handed kit or not play at all.” Because of this, it became a necessity for me to be adaptable to any situation and as a result I’ve never really had a strict setup or ever been a particular “gear head” kind of guy. I hit it and if it sounds good to me, I’m gravy. If not, I tune it, hit it again, and continue until I’m there. The same goes for monitoring; I got so used to having no monitors that it doesn’t make too much of a difference to me anymore. It’s nice if I can hear and feel the kick, but ultimately it’s never really affected my playing.

When I was sixteen years old, my dad came home one night and gave me a scrunched up napkin from the midland hotel in Manchester. He said, “I met the drummer from some band called Prodigy last night and told him you were a drummer, too, so he signed this for you.” When I opened it up it read, “Hit ’em Hard—Liam Howlett.” If I’d ever needed an excuse, this was it. I’ve never looked back since.