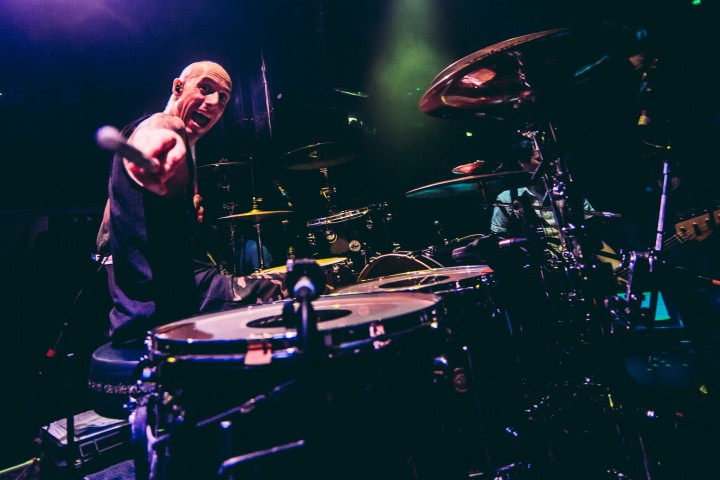 Hello Modern Drummer family! As I write this, I’m in Stuggart, Germany with Sum 41. We’re at the end of our three-and-a-half week European tour. The first leg of this run was the Kerrang! tour that took us all over England and to Ireland and Glasgow. The second leg brought us to Amsterdam, Germany, and two amazing nights in Paris. The entire tour is sold out and the crowds have been amazing every night.

The energy is insane! We play for ninety minutes and the set is intense. And, I have a drum solo every night! For the solo, I just go for it every night and don’t have anything pre-planned—I like the excitement of the unknown and just playing off the cuff.

I’ve been working with the band for over a year now and did a bunch of festivals and one-offs. This is my first full tour with the band and their first full tour since 2013. I had to learn the band’s full discography as we’re changing the set nightly. I have also incorporated electronics to my live rig and it’s been great to sonically bring that element to the band’s live shows.

The new record is almost done and I tracked all the drums over the past year at two different studios in Hollywood, California. Deryck Whibley and I did tons of pre-production for this record and really spent a lot of time fine tuning every beat and fill.

Next, we head to China and Japan. We’ll be out for the rest of the year and throughout next year as well. I’m really enjoying this gig as I’ve been a fan for years and have been really good friends with Deryck for a long time. The band musically fits and complements my style and I’m really grateful to be playing with these guys who are all great players.

A month before we left for this tour, my wife and I welcomed our first child, a boy named Brixton Frederic Zummo. It’s been absolutely amazing and I’m excited every time to get home to my family. It’s hard being away but technology and FaceTime is amazing and makes it somewhat easier. I’m really looking forward to bringing him out this summer on the road from time to time.

I’ve been very busy on this tour working on my other project Street Drum Corps 2016. We’re also in the middle of a massive casting for our upcoming shows. If any drummers are interested please send your best video clips and info to SDCcastings@gmail.com. We’re headed to Tommy Lee’s Atrium Studio in April to record a new Street Drum Corps’ Blood Drums EP with KJ Sawka from Pendulum and Destroid. This will be released in the fall when all our Blood Drums shows are out performing all over the US. I also have a few Krewella shows coming up this year and that gig has been a blast playing live.

Thanks for letting me share my travels with you and I look forward to more shows and good times!

Check out the New Sum 41 video below: , and for info on Street Drum Corps, visit www.StreetDrumCorps.com.