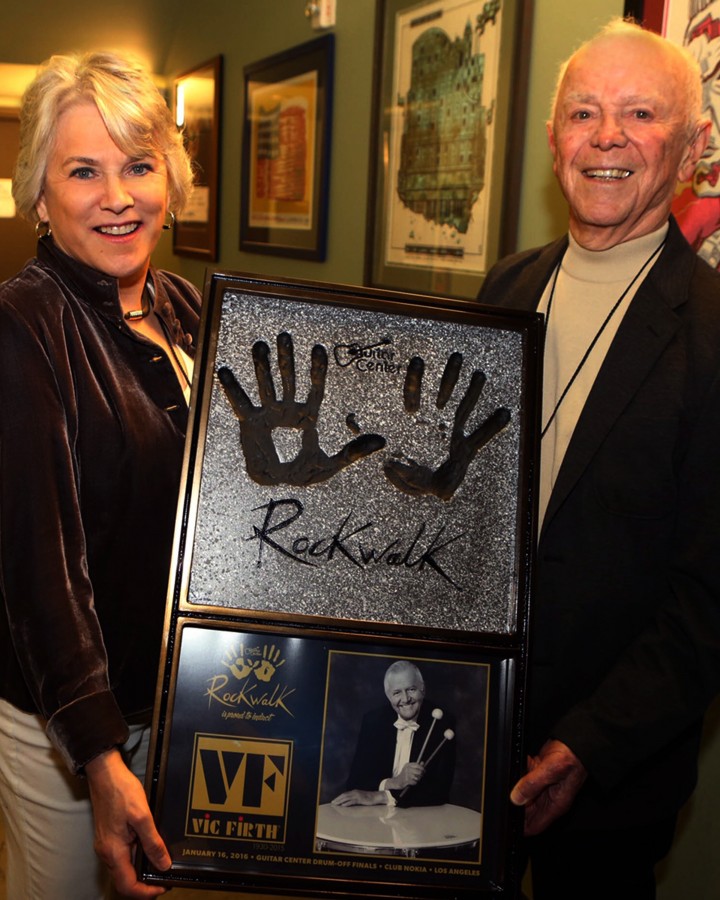 The Guitar Center RockWalk recently welcomed Everett “Vic” Firth, world famous timpanist for the Boston Symphony Orchestra and founder of the Vic Firth Company, to its ranks of music pioneers and performing legends.

Awarded posthumously at the 27th annual Guitar Center Drum-Off, the RockWalk honor was presented to Craigie Zildjian by Remo Belli, CEO and founder of Remo, Inc. Accepting on behalf of Vic, his family, and the company he founded, Craigie took a moment to reflect on Vic’s storied career.

“I’m so pleased to see Vic recognized for both his business acumen as well as his musical talent,” stated Craigie Zildjian, CEO of Zildjian Company, which merged with the Vic Firth Company in 2010. “If you knew Vic, clearly one career was never going to be enough. So, it seems as though Vic needed the drumstick business as much as it needed him!”

Vic’s contributions to the music industry were many. His obsession with the quality of sound guided his playing, his teaching, and ultimately led to the birth of the Vic Firth Company in 1963. Vic is credited with inventing or standardizing many of the key manufacturing processes percussionists rely on today, including centerless grinding, pitch-pairing, weight-sorting, injection molding, and much more. With all the technological breakthroughs he made, he coined the tagline, “The Perfect Pair” which has become iconic around the world among drummers.

Asked in 2013 to reflect on the 50th anniversary of his company, Vic, as he was known to do, humbly downplayed the accomplishment. “As wonderful as it is to reflect and appreciate where we’ve been, our eyes are always on the future—and the future is bright. I would like to express appreciation to all the great musicians who have chosen to perform with my sticks through the years—for this, I most graciously thank you all.”