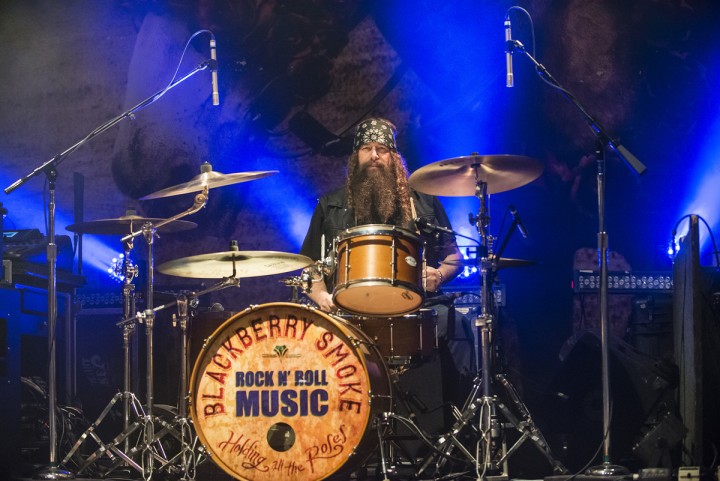 Blackberry Smoke provided one of the year’s crossover album hits, topping country and rock charts with the Brendan O’Brien–produced Holding All the Roses. And once again, the Turner brothers, bassist Richard and drummer Brit, locked it all down with a sultry Southern swagger. MD caught up with Brit before a soundcheck at the 02 Academy in Birmingham, England.

MD: You guys took all of eight days to make Holding All the Roses.

Britt: We don’t ever have much time off, and usually our time off turns into recording a record. We really know how to do it one way, and that’s to get in and play, go back and do some vocals and whatnot. It was fun and easy to make because we didn’t have to explain to Brendan what our sound was. He had come out and seen us a couple times and was like, “Man, I feel like I’ve been in your band. I understand this.” And we were like, “We knew you would.”

I’ve always loved his drum sounds, very live and very open. He’s a child of the ’70s too, you know, he just knows the value of just a dry drum sound, and a room too. So we really didn’t have to talk much about how we wanted it to sound. We just went in and played, and if he had an idea we just kind of went from there. We did actually approach a couple songs differently. On one in particular, he was like, “I want these drums to be so live and loud that you cannot hit a cymbal during this track.” And I’d never done that before, so, you know, with muscle memory you’re going a little crazy, but it turned out. And the title track, “Holding All the Roses,” we did that on one pass.

MD: How was it working on drums with him? Would he just dial in a sound and you approve or not?

Britt: Basically he just had a lot of mics throughout the room and would be like, “I think this should be tighter…this should be more open….” He came out to see us in L.A. and said that he liked the way I play drums. He said, “You don’t beat the shit out of the drums. That’s so important when you record.” I said, “Well, I’ve never been able to afford to beat the shit out of my drums.” I’ve just played them a certain way the whole time. And he said, ‘Well, you know, people that hit real hard just choke the drum sounds in the studio, and it’s very hard for me to do my best. So I said, “Okay, good, that’ll work.” And I just love the sounds he got on the record.

Yeah, my thing is, I’m not trying to get in the way. I think less is always more when it comes to building a song, and I don’t know, maybe that comes from just listening to the Beatles growing up. I don’t feel like I need to audition on a song.

MD: That’s one of the beautiful things about your band in general. You guys make it look so easy.

Britt: Well, thanks, man. My brother is the bass player, so growing up playing with him, it’s just second nature. Keeping it nice and relaxed.

MD: Do you guys like to all record together?

Britt: Ninety-something percent of the time, everything’s done together. “Holding All the Roses” was originally an acoustic demo, so Brendan was saying that he wanted to keep a lot of that vibe. So Charlie and I did the song together. I just did a shaker, a kick drum, and some congas, and he played acoustic and sang. That’s the first time we’ve ever done anything like that. Then we just built on top of it. It came out cool, man.

And then on “No Way Back to Eden,” we did a lot of percussion and congas, and then I played on the choruses with towels on the drums, just that old Elton John, kind of dead sound. I love that.

To me, when you spend money on a producer, you kind of don’t want to go in and do it the way you’ve always done it. You want to experience something new. Bring an idea to the table that we haven’t thought of, and then your knowledge of building a track. And there’s always a song or two on a record that’s kind of a sleeper, where you’re like, “Oh, this is a great song,” and then when you get in the studio it’s like, “Whoa, this has become one of my favorite songs on the record.”

MD: “No Way Back to Eden” was a real nice track with the percussion.

Britt: Yeah, I really wanted to put drums in the chorus, and Charlie was like, “I don’t know, I think we need to keep this song just real low-fi percussion.” And I said, “Let me lay this one thing in there, and we can take it out if we want.” And I think everybody else’s visions of the drums in the chorus was that all of a sudden it was going to be like an Aerosmith song, but it kind of just laid in there real low and I thought it turned out good.

MD: I don’t know if you wrote with a certain single in mind, but it’s a whole album of strong material.

Britt: Each of us has opinions about certain songs, but we’ve never had a handle on that part of the music business. So we just figured, let’s just play and record and tour. That’s what we can control, and maybe people will notice and like it and come to see us over and over. And it’s worked.

MD: I enjoy the jam section you guys get into on “Fire in the Hole.”

Britt: It’s funny you mention that. That was really the only thing that we butted heads on—not really, but the beginning of that song had a little jam too, and Brendan goes, ‘Man, we’re not going to jam on this song, come on.” And Charlie was like, “Oh, we’re jamming on this song, we’re definitely breaking it down in the middle and we’re going to do this feel.” He’s like, “Alright.”

MD: Great snare sound on “Let Me Help You (Find the Door).”

Britt: Yeah, man, thanks. My buddy has this company, Palmetto Drums, in South Carolina, and it’s a hackberry snare, solid hackberry. It’s a tree from right around there, actually. It’s pretty hard wood, tough to bend. We were trying to make a bunch of them, and we’ve gotten about four of them bent into shells now. I use that snare a lot.

MD: Do you play an entire Palmetto kit?

Britt: Yeah, I do. My first drumset was this early ’60s Slingerland, and it had standard-depth toms and a 20″ kick. Now I play a 24″, but I like the shallower depth on the kick drum, like 14″. I’ve even got a 12″. But it’s hard to find those in newer kits. And I love the old reinforcement rings that were on those Slingerlands and on the Ludwigs at that time. And trying to put together an older kit like that is hard, there aren’t a lot of them around. And this guy said, “We can build something.”

Britt: Man, I just think gradual steps. We’re consistently stepping up and getting excited about things. Nothing big happens all at once, but all these great little treasures we’ll find, if it’s like cutting a song with George Jones and Jamey Johnson that time, or Leno, or Conan. Things that are like little achievements. Selling out Shepherd’s Bush in London—I mean, we went from a 250-seat club to three months later selling out Shepherd’s Bush, so little things like that. It’s kind of like a drug, I guess. Another thing is our fans being proud of us. They see stuff like that and they lift you up too, and that type of thing keeps you going.