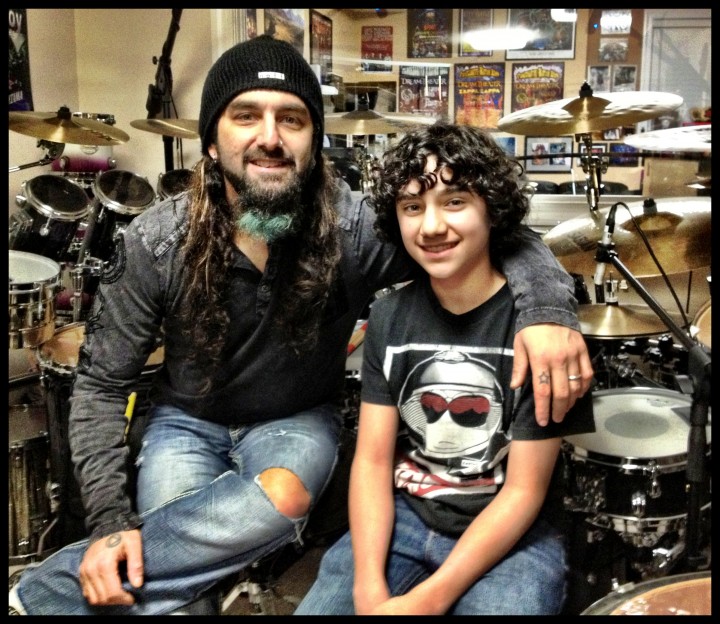 Progressive metal band Next to None’s debut album, A Light in the Dark, features Mike Portnoy’s son, Max, on drums. Here, father and son share their thoughts on the making of the album.

MD: Max, surely there was a lot of different kinds of music played in your house when you were growing up. Did you always gravitate towards prog and metal?

Max: I grew up listening to everything my dad did with Dream Theater. Metal has always been my favorite. Slipknot is my favorite band. And Metallica, Pantera, and Lamb of God.

MD: How long have you been playing?

Max: I started hitting stuff when I was three, but I started lessons when I was five. My dad would show me some fills and stuff, but I do have another teacher and I still take lessons today. I also go to a music school and we do a lot of rudimental stuff and reading and music theory. They teach us jazz and traditional classical too, so I’m learning everything.

MD: How do you come up with drum parts for the songs? What inspires you?

Max: Lead singer and keyboardist Thomas Cuce and I are the main writers. For fills, I just do whatever sounds right in the moment. But in the studio I also had fills planned because I had already jammed on them with the band. We recorded with a click and I had to practice a lot, because there are many tempo and time changes.

MD: What was it like having your dad produce the record?

Max: It was really nice having him produce. He was helping us understand how to organize our time in the studio. If he wanted me to change something, he didn’t yell at me. [laughs]

MD: Mike, what was it like producing your son? Was it like coaching him on the basketball team?

Mike: It was an amazing experience. They really reminded me of the way we were when we did our first Dream Theater album. Also, we went into a real studio and did the whole thing over the course of a month. Most bands these days, including mine, work on individual Pro-Tools rigs at home. We made a conscious decision to go into a studio so they’d have that camaraderie and studio experience.

MD: As a producer, did you learn anything from the experience?

Mike: I produce three to five albums of my own a year, but this was the first time [I worked] as an outside producer. You have to be diplomatic. And in this case you have my son, Max…I had to show no favoritism or bias, and I had to try to be as objective as possible with the suggestions I would make. So I had to separate myself from the father [role] and be a producer. It was also important for their sound to match their style. Even though they’re in the prog genre, they are very heavy. They have those Slipknot, Pantera, and Lamb of God influences, so it was important that the drum sound and guitar sound stand up in that world. This wasn’t supposed to be a Dream Theater–sounding album; it was Slipknot meets Dream Theater.

MD: Do you have any advice for all the members of Next to None in terms of navigating the crazy music business?

Mike: They’re doing great on their own. I can’t overstate how much of this is them. They wrote every note of this music, and they play it all. They’re a talented group of boys. All I can do is lend my experience to them and possibly open some doors. But they’re the ones who have to do the heavy lifting. They have to write the songs and play the gigs and take advantage of the opportunities. They have to walk the walk, and so far they have. And they have advantages at their fingertips that I didn’t have at their age. They have social media—YouTube and Twitter and Facebook. So they can get their music out on their own to every corner of the planet.