Drums, bass, or keys? Why not play all three at once?

On post-rock instrumental duo El Ten Eleven’s newest record, Fast Forward, rhythmic backbone Tim Fogarty pushes the role of a drummer into uncharted territories of melodies, hybrid electronic setups, and live loops. “I always want to try and do more,” Fogarty says. “That’s how we ended up with tons of MalletKAT parts on the new record. I wanted to do more than just play drum parts. I love the challenge of keeping things interesting and not repeating ourselves from record to record.” Fogarty, along with bassist Kristian Dunn, released Fast Forward earlier this year, and the drummer took time away from the group’s current tour to talk about expanding his setup, working as a duo, and mixing synth lines into drum parts.

MD: Did you always incorporate electronics into your acoustic setup? How has it evolved over time?

Tim: I’ve been using electronic drums since the mid-’90s. I had an Alesis D4, a FatKAT pedal, and a Simmons pad. I mostly did 808 kicks and claps. It’s evolved a lot since then. Now I have more electronic drums than acoustic drums in my setup.

The biggest addition was a MalletKAT. I got into synths a few years ago and realized that I could get synth sounds and play them with sticks or fingers on a MalletKAT. Before I got one I searched YouTube to see if anyone had done it already, and I couldn’t find anything but jazz and classical guys playing Mr. Rogers kind of stuff with it. Which is cool, just not as cool as putting a tape-saturated 808 kick sound across two octaves so you can play melodies with sticks!

MD: Is playing live with a click a recent development? How did you stay in sync with Kristian’s loops in the past?

Tim: We started using a click when we were writing the songs that ended up on our new record. Kristian started using looping pedals that have MIDI capabilities, so we tried it. Live we use it on five or six songs. The rest of the set we do it the old way, without a click. On those songs, depending on who starts, they set the tempo and the first part looped [acts as] the click. Sometimes it’s an electronic drum part, and sometimes it’s a bass part. It usually isn’t hard to stay in sync as long as the loop feels good and the rest of the layers that are added feel good.

MD: Can you explain how you loop your own drum parts? Does the A/B switch directly control Kristian’s pedal, or is it more like a gate?

Tim: All of the electronic drum parts and bass stuff I play comes out of one output. I split that and one side goes directly to the A/B switch [Fogarty uses his heel to control the switch]. The other side goes to one side of Kristian’s stereo looper, then out of the looper back to the A/B switch. Then the output of the A/B switch goes to the house and my bass amp. So basically if I don’t want to be looping I hit the A side. When I want to loop I hit the B side. So I just think of it as an on/off switch for the looper.

MD: When you write music, are you concerned with how you’re going to reproduce it live? Does that limit anything? 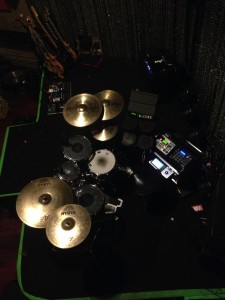 Tim: We used to get hung up on that. Now we just try not to think about that in the recording/writing process. I mean, it’s always in the back of our minds, but we don’t let it limit us now. We’ll just modify things for live, and sometimes it actually makes the live version different enough that it ends up being a cool alternate version.

MD: What’s your recording process like? Do you play everything live or layer parts?

Tim: We typically layer stuff. There will be a demo version that is a reference track. Sometimes Kristian will play while I record my parts. Then he’ll layer his parts. It’s easier to mix when everything is individually tracked. I think we’ll eventually do a live record because to me that’s really our sound.

MD: Have you ever felt limited compositionally with only two people? Is it a goal or concept of the band to remain a duo?

Tim: I’ve never felt limited as a duo. I feel limited by only having two arms and two legs. I always want to try and do more. That’s how we ended up with tons of MalletKAT parts on the new record. I wanted to do more than just play drum parts. I love the challenge of keeping things interesting and not repeating ourselves from record to record. That being said, there’s a strong possibility that there will be vocals on the next bunch of songs.

MD: Are there any particular bands that have influenced your electronic sound?

Tim: Honestly, I get influence from so many different things. Drummers we tour with, YouTube videos, electronic artists…. My scanner plays the coolest beat when it’s scanning: “Whoosh, chik chik, whoosh, chik chik.”

Playing Rototoms came from loving Alex Van Halen as a kid and going through a Terry Bozzio phase. I love them. They don’t work for all types of music, but for this, they’re perfect. I stacked up big cracked cymbals to get that trashy Missing Persons China sound that Bozzio used to get.

MD: When you use samples, have you generated those sounds yourself? What’s that process like? Do you have a specific idea for a sound before trying to create it?

Tim: It’s a mix of made and classic sounds. This last record, I got really into 707 kick and snare sounds. So I may add a clap to the snare sound to make it cut more. I usually stack a couple kick samples to make kick sounds. I have so many samples now that when I’m looking for inspiration, I’ll load my sampler up with a bunch of new sounds, sit down, and build kits from random samples. Or I’ll take one sample and spread it out across the MalletKAT and play melodies. I can’t nerd out too much on samples, though. I don’t have the attention span for that.

Check out a video rundown of Fogarty’s setup at facebook.com.

Hey guys… this is a rundown of what's going on with my live setup for all you gear geeks that are into this stuff. Enjoy. – TimEl Ten Eleven on tour: http://www.elteneleven.com/live/