How’s it going out there all my skin beating buddies? It’s Mike Goldberg (AKA Metal) checking in from my home base at IMP Studios. Recently, I have been working with Mountain’s Leslie West on his latest solo album Soundcheck, which was released on November 20, 2015. This makes my third consecutive record with the “King of Tone,” expanding from recording engineer to co-producer, engineer, mixer, and drummer.

The last five or six years have been career defining for me. Working so closely with a true legend like Leslie, and all that goes along with that, has been amazing, even surprising at times—like when he introduced me to Johnny Winter, which led to me winning a Grammy for mixing his last record Step Back, which won for best blues album.

In the studio with Leslie I took a very supportive approach to the drums, listening very closely to what and how he was playing and singing. I used grooves that supported his feel, accenting his pushes and pulls, and used only effective fills where needed in the song structure, leaving space for his crushing guitar riffs and powerhouse vocal performances to shine through. I thought, serve the song, not my ego.

Let’s face it, no one cares (except us drummers) about that sick fill you did going into the solo or how amazing your snare drum sounds, they care about how the song makes them feel and most of that comes from the song itself and the vocal performance. Take care of the vibe and the feel of the song and everything else will just fall into place most of the time.

Be open to anything! You’re working on the artist’s team, so be a team player. If it comes up, try things that are suggested to you, because sometimes they turn out to be gems that you would have never expected. It doesn’t matter who the artist is or what style of music you are working on, the same theories apply across the board. I know from experience that these things can be done while never losing your unique energy and personality—you know, the stuff that got you the gig in the first place.

These days, it’s back to the grind for me. I’m working on some new material for Doro Pesch at the moment. The Metal Queen and I go way back and she sounds amazing as usual. Doro and her bandmates are some of the best in the business. See the link below.

Keep on bashing and thanks for checking in! 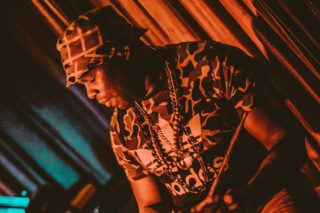 Chad McKinsey of The Suicide Denial