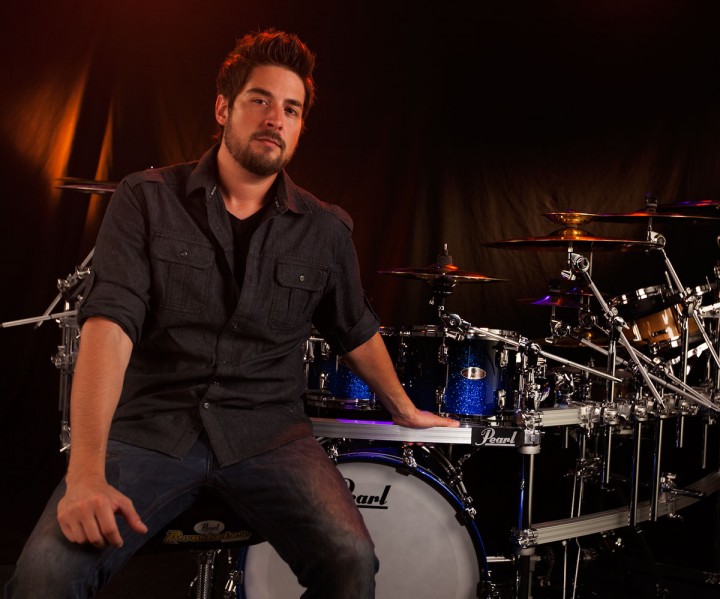 Prior to joining the revamped lineup of the hit alternative metal band Breaking Benjamin, Shaun Foist spent thirteen years immersing himself in all things drumming, including playing with Picture Me Broken, a band fronted by Gregg Allman’s daughter, Brooklyn Allman. Over the years Foist enjoyed a few “wow” moments, including opening the 2013 Alice Cooper/Marilyn Manson Masters of Madness tour.

Of course, he also experienced the occasional heartbreaks and setbacks that come with being a musician. But the negatives never defined Foist. He remained dedicated and driven. Failure was never an option—though that particular “F” word would eventually play a pivotal, and positive, role in his professional journey.

As a fan of Breaking Benjamin, Foist found that the songs written by founder and front man Benjamin Burnley deeply resonated with him. But the drummer never seriously thought that he’d have an opportunity to perform on the same stage with his idol. Then one day the phone rang. Burnley was looking for a drummer for his rebooted band. He’d seen YouTube videos of Foist drumming along to Breaking Benjamin songs, and then recalled a fleeting moment when they’d met years prior.

Through a mutual friend, Ben and Shaun connected. Ben wanted to see more from Shaun, who was staying in the Bay Area at the time. The drummer secured a video cam and rehearsal space at Fang Studios in San Mateo, California, and soon after submitted three more BB performance covers, “Diary of Jane,” “Natural Life,” and “So Cold.” Then the second call from Ben came: “Let’s meet and see if we connect.”

Now back at his family’s home in Middletown, Ohio, Foist loaded up his drums and made the trek to Ben’s place in Downingtown, Pennsylvania. They jammed, spent time getting to know each other, and as cliché as it sounds, the rest was history—and ultimately made history, with Breaking Benjamin’s now five-member lineup debuting at number-one on the Billboard 200 with their June 23 album release, Dark Before Dawn—a first for the band. “Failure,” the first single from the album, proceeded to garner more airplay than any other track on rock radio for eight consecutive weeks. Subsequent singles “Angels Fall” and “Defeated” made similarly successful runs toward the top of the rock charts.

MD recently spent some quality time talking with Shaun about those and other precious “wow” moments that he’s been having with Breaking Benjamin.

MD: You’ve been on the road with Breaking Benjamin, performing both acoustic and fully plugged-in concerts, since October 2014. What’s been the most surprising aspect of this journey so far for you?

Shaun: For me, it’s been the overwhelming support and love from the fans. They know my name, they ask for pictures and autographs, and as a new guy, that sort of thing just blows me away. I truly feel like I’ve been a part of this for years.

MD: “Failure” is a mega-hit for Breaking Benjamin, surprising even the critics, given the band’s lengthy hiatus. What was your reaction the first time you heard the song on the radio—do you remember that exact moment?

Shaun: I really do. I sat in the car like a kid on Christmas Day waiting for it, and when it hit, I kinda just stared at the screen on my truck, watching, “Breaking Benjamin—Failure” crawl across the screen. All I could think about was how I wish my dad were still alive, sitting here in the truck listening with me. That was our place to go to listen to my music every time I came home with a new song. I just imagined he was there, chuckling and nodding his head with his phone out, texting his buddies. It was an incredible moment, but also very bittersweet.

MD: What gear are you currently using?

Shaun: I just switched endorsements from Tama to Pearl. I’ve been using a Reference on tour. In January I’ll be getting a complete custom kit, which will be a total state-of-the-art setup that will blow people’s minds. I couldn’t be more stoked about the support I’m receiving from Pearl and the friendships I’ve made so far with the people there.

I’ve also switched from Roland pads to Pintech pads, but I’m still using the Roland TD-11 brain and Roland SPD-SX to run all of the sampling. So essentially the kit still has an e-kit built into it to run all of the samples, instead of the Roland V-drums we were using previously. I’m also using Zildjian cymbals, Evans drumheads, Vic Firth sticks, and Groove Juice stick grip and cleaner.

I can’t say enough good things about the equipment I have in place now, as well as the people and the companies. The gear really lives up to a beating, no pun intended, when I’m doing full-on performances.

MD: The songs on Dark Before Dawn were pretty much completed by Ben by the time he selected the four performers he wanted to bring in to record the album—you, bassist Aaron Bruch, and guitarists Jasen Rauch and Keith Wallen. In interviews, Ben’s mentioned that he’s open to and looking forward to a more collaborative effort on future music projects. With that in mind, what do you hope to bring to the table?

Shaun: I have a few song ideas in the works. Most of them are melodies and chorus ideas, as well as drum parts. Ultimately, whatever ideas any of us might bring to the table for new music has to be a fit for Ben and Breaking Benjamin and the bigger vision that he sees and directs. Since all of us were fans way prior to being assembled, we all have a pretty good sense of what he’s looking for in new music. But Ben has the final word, and that’s the way it should be.

MD: Playing for Breaking Benjamin, in your words, was your “making it as a professional drummer” moment. But really, you’ve been at this professionally for about thirteen years now. What part of those years prepared you the most for everything happening in your life now?

Shaun: I’d have to say it’s been all of the live shows I performed with my own and other bands over those years. Nothing prepares a musician like playing live. You can play in your basement all you want, but as soon as you hit the stage, it’s a completely different environment and energy. The same thing with studio work—it’s completely different in that it’s a controlled environment, with repetitive marks that you have to nail in a much different way from playing on stage. [Doing recordings] is definitely another thing that helped prepare me for recording Dark Before Dawn. That, too, is totally different from playing at home or on stage. Both of those require a different skill set, and I’d like to believe I’ve done a pretty good job in fine-tuning and identifying [how it’s best to play] in each particular environment.

MD: August 2015 marked one year since the announcement of the return of Breaking Benjamin. What’s this first year been like for you?

Shaun: It’s been humbling and so exciting to be playing for Breaking Benjamin. To start out as a fan and to be where I am now—it’s beyond a dream come true. But it just goes to show, anything is possible if you dedicate yourself to your craft. And I have to say, having your work on YouTube, where someone might notice it, is a definite bonus and a boost to your craft. It’s a great resource for being seen, if someone is looking.

Together on stage we all perform to our highest ability, but we also have a fun, respectful, and loyal friendship off stage. I know it’s been said before, but it truly is a brotherhood among us, and I know the fans are picking up on that, especially when they see us perform on tour and talk to us after shows. You can’t fake it with the fans, and our fans are amazing. We couldn’t and wouldn’t do this without them.

For more on Shaun Foist and Breaking Benjamin, including next February’s Axes and Anchors cruise, on which Breaking Benjamin is headlining and Foist is conducting a one-hour drum workshop, go to www.shaunfoist.com, www.breakingbenjamin.com, or www.axesandanchors.com.