Wobeonfest returns to Ironwood Hall in downtown Austin this September, marking the third year of the homegrown festival with a global reach. This year, the festival organizers have added a Jazz Fusion Festival to the two-day gathering, which will feature a rare US performance by drum legend Billy Cobham (of Mahavishnu Orchestra fame) and guitar great Scott Henderson on Sunday, September 13.

Billy Cobham brings his Spectrum 40 quartet with jazz greats Dean Brown and Ric Fierabracci to the inaugural Jazz Fusion Festival. The Modern Drummer Hall of Fame inductee and his band celebrates the music of Cobham’s first album and performs in the spirit of the rich 1970s fusion era. Scott Henderson and his new trio with Travis Carlton and Alan Hertz will also be featured.  Henderson is best known for his innovative work with fusion band Tribal Tech, and for his role with Joe Zawinul and the Zawinul Syndicate.

Festival Founder Jakes Srinivasan speaks on the event’s new extension: “We are always looking at breaking new ground with the kind of music we curate. If you see the many, many shows and artists we’ve promoted and presented over the last three years, you’ll see that you can’t necessarily put these bands in neat boxes.” He elaborates, “All music is world music, as they say, and there’s a huge pool of great artists, even right here in our own backyard that are incredibly exciting to watch and hear, but for whatever reason don’t get the same share of voice or airplay as we think they deserve. World music falls in that category, so does jazz fusion.”

Jazz fusion is a progressive amalgamation of rock and jazz that blossomed in the ’70s and ’80s, and continues to have a tremendous global, yet simultaneously niche, following. Fans of legendary artists like Chick Corea, Miles Davis, and Weather Report continue to harbor their passion for jazz fusion even today.

Of late, bands like Grammy-winning Snarky Puppy are bringing new fans to this exciting genre. In 2014, Wobeon introduced Dallas-based jazz fusion band Funky Knuckles to festival fans and received great feedback. Producing separately programmed days with single-day ticketing for each of the two genres allows both audience bases to get a full sampling of music closest to their interest. Local jazz guitarist Glenn Rexach, rising fusion stars Curious Android, and local group Collin Shook Quintet round out the lineup.

Wobeon has featured renowned artists from all corners of the world, from Angola to Morocco to Brooklyn, and from right here in Austin. Afro-pop queen Angelique Kidjo, Bermuda reggae sensation Collie Buddz, electro-cumbia party starters Bomba Estereo, and big beat bhangra juggernauts Red Baraat have all performed at the gathering, along with local favorites like Atash, Bramaya, and Maracatu Texas.

This festival is made possible in part by the generosity and support of organizations such as KUTX Radio Austin, the City of Austin Cultural Affairs Division of the Economic Development Department, Texas Folklife, Ironwood Hall, and others.

For tickets, go to wobeonfest.com/tickets2015. 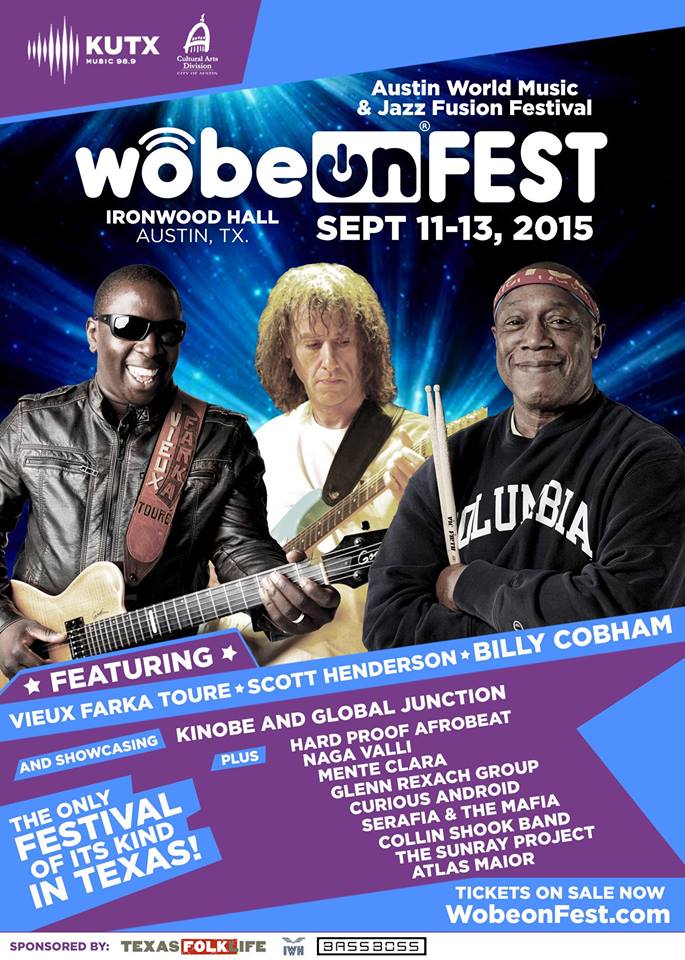