This excerpt is taken from the complete article that appears in the August 2015 issue, which can be purchased at: http://wp.me/p1bQfj-fuj

This month we’re going to add the pataflafla (a rudiment consisting of two adjacent flams) to some two-accent hemiola patterns to give us a rhythmic and rudimental challenge. In its most basic form, a hemiola is a pattern based on the three-against-two polyrhythm so that it creates a new pulse over the original tempo.

The pataflafla consists of two adjacent accented flams. It’s one of the more challenging rudiments, since each hand plays a different part and requires a different technical approach. (Check out my lesson in the May 2015 issue for more on the technical requirements of the pataflafla.) As the pataflafla moves into the different rhythmic positions, the technical demands to play the flams will change. To negotiate the accented flams at a medium tempo and up, you’ll need to use all four methods of approaching accent/tap patterns, including the four basic strokes (full, down, tap, and up), the no-chop flop-and-drop, the Moeller whip-and-flop, and the Moeller whip-and-stop.

For more insight into these techniques, and for transcriptions of the exercises demonstrated in the video, check out the August 2015 issue, which can be purchased at: http://wp.me/p1bQfj-fuj 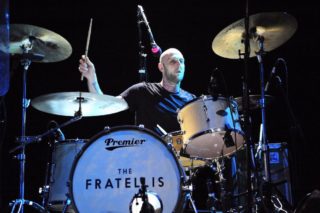 On The Beat with Mince from the Fratellis: Talks New Album In Your Own Sweet Time