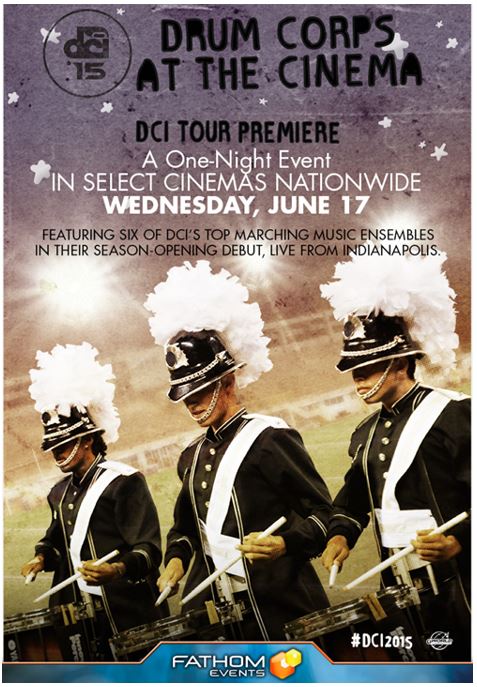 For the first time in the event’s five year history, the performances will be presented live in theaters from Lucas Oil Stadium in Indianapolis, IN, and will showcase DCI’s top marching music ensembles for its season-opening competition. This year’s event will feature performances from some of nation’s fiercest competitors—Blue Stars (La Crosse, Wisconsin), Bluecoats (Canton, Ohio), Carolina Crown (Ft. Mill, South Carolina), Madison Scouts (Madison, Wisconsin), the Cadets (Allentown, Pennslyvania), and the Cavaliers (Rosemont, Illinois)—as they compete for top honors in the first of over 100 competitions in more than thirty states on DCI’s fifty-three day summer tour.

Tickets for “Drum Corps at the Movies: 2015 DCI Tour Premiere” are available at participating theater box offices and online at www.FathomEvents.com, or at participating theater box offices. The event will be presented in over 550 select movie theaters in the US through Fathom’s Digital Broadcast Network. For a complete list of theater locations and prices, visit the Fathom Events website (theaters and participants are subject to change).

“The DCI events are extremely attention-grabbing and an amazing segment of our performing arts events that we bring to the big screen. Being able to watch these events live in theaters allows the audience to fully experience the talent of these teams,” said Fathom Events CEO John Rubey.

Tickets are available now at participating theater box offices and online at www.FathomEvents.com. For a complete list of theaters, click here.