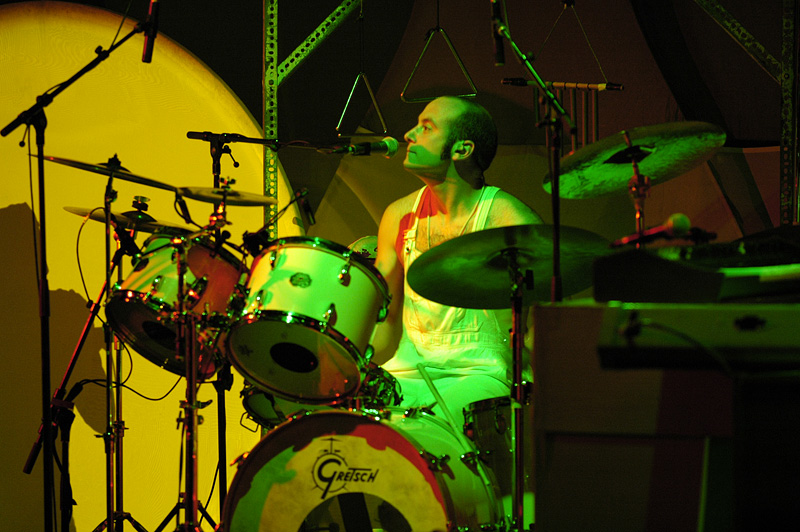 Hello Modern Drummer, my name is Martin Levac and I am a drummer, singer, keyboardist, lyricist, and composer, best known for my on stage impersonation of British drummer and singer Phil Collins.

My passion for the music of Genesis and Phil Collins took root in my teenage years. I was so passionate about Phil’s drumming that I changed my drums from right-handed to left-handed to better understand the subtleties of his style. Thus began the journey of perfecting his impersonation. Working to get the left hand to become the leading hand has helped me to develop an ambidextrous drum playing.

I was born in Longueuil, a southern suburb of Montreal, Quebec, Canada, on November 10, 1971, and received my first toy drumkit at eight years old. At age thirteen, I was armed with a “real” drumkit. A group of schoolmates and I formed our first band, Chester-Phil, from Phil’s earliest days, and I continuously expanded my musical horizons and study of many styles—rock, prog-rock, jazz, and pop. 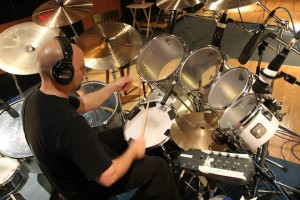 My first compositions arose in 1988 with a band called the Bobs, and we played Beatles’ songs and other groups’ greatest hits, as well as original numbers. In both 1996 and 1998, I was a finalist in the Granby International Song Festival, and in 2000, I released my first album L’Amour ou le Sexe of original compositions. My second album appeared a year later, simply entitled Levac.

In 2006, my third CD and first one in English, was entitled Influences and was written while on The Lamb Lies Down On Broadway tour with Genesis’ tribute band the Musical Box. In 2011 and 2013 I released two albums of Genesis covers revisited with a jazz band, A Visible Jazz Touch of Genesis.

Validated by audiences, critics and Phil Collins, Phil himself came to watch me play a whole show in Geneva, February 2005 and played the encore on my kit! I’ll never forget, before stepping behind my drums, Phil said to me “you’re amazing man!” We met again on three other occasions after that night.

Also from 2008 to 2011, Genesis and Phil Collins guitarist Daryl Stuermer invited me to become the singer for his solo project, Genesis Rewired. We even did a few shows together in the Midwest.

I am presently working on an original album called 1985 and the album will be largely inspired by those of Genesis and Phil Collins in the ’80s. I look to release 1985 in September 2015.

Thank you for reading and special thank you to my dear friend percussionist Eddie Toussaint for hipping me to the Modern Drummer blogs.

Watch Martin and his drummer Mathieu Groulx performing the famous drum duets of Phil Collins and Chester Thompson below:

For more on Martin, go to www.martinlevac.com.