This article originally ran in the July/Aug 2010 issue of Drum Business.

Counterhoops are among the more mysterious elements of a drumkit. Some drummers aren’t even aware that there are different types, and among those who are, there is often confusion or outright ignorance regarding the differences between each kind. DB checked in with gear guru Bob Gatzen for some straight talk about hoop history, construction, and application.

Why is the choice of counterhoops important?

Small details add up to big differences. It’s like detailing a car. Every component is scrutinized, cleaned, and polished, with the end result being a magnificent-looking automobile…your automobile.

How do different types of hoops—triple-flanged, wood, die-cast—affect the sound of a drum?

Counterhoops affect overtones generated from the edges of the drumhead. Compared with die-cast and wood models, flanged hoops allow the outer edges of the head to vibrate more freely, resulting in more sustain and an open, colorful, complex tone. Die-cast and wood hoops do not vibrate as freely, creating a dampening effect on overtone buildup. This generates more focus, shortened sustain, and density in tone.

To prove this, simply hold up each kind of hoop on one finger and tap it with a drumstick. You’ll notice the die-cast and wood hoops have a short sustain associated with a clunky sound. By comparison, a flanged hoop will ring like a bell with significantly more sustain. Hoops and heads are a team. Their job is to affect the overall sound and feel of the drum, regardless of the shell construction.

If you’re aiming for the maximum dynamic range—lots of sustain associated with a colorful, open sound—then flanged hoops are a good choice. On the other hand, if you’re after more density in tone, finer pitch definition, and shortened sustain, then die-cast and wood hoops would fit the bill.

Do you prefer using particular types of hoops with certain types of drums?

Sound is subjective, so there are no specific rules. It all depends on what you’re after. Rules are made up in our pursuit of excellence. For example, if you have a drum that inherently produces a bright, open sound, die-cast or wood hoops would be a good choice to tame it down. On the other hand, if you decide to use flanged hoops, you’d better be looking for a brilliant, open tone. Who’s to judge which sound is best?

Are there discernible differences between the same type of hoop manufactured by different companies?

In the three hoop categories—flanged, die-cast, and wood—slight differences in each category have very little effect on the overall sound. I’d sure hate to do a blindfold test on two types of flanged hoops! 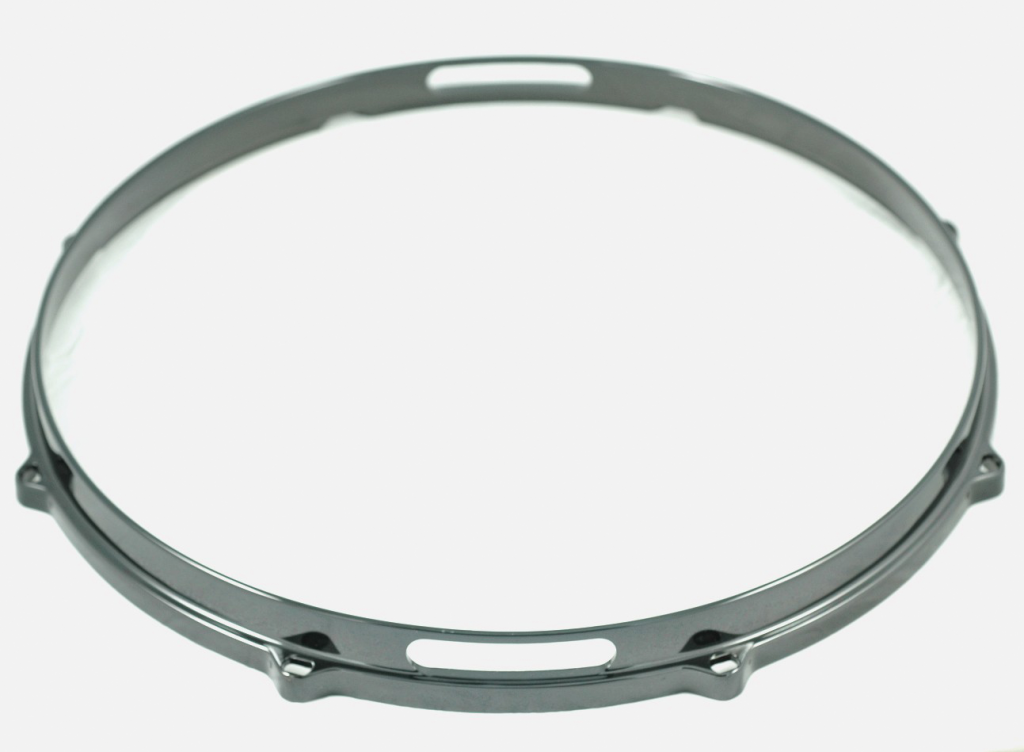 Broken drumsticks? Single- and double-flanged hoops, as well as straight hoops, are pure torture on drumsticks. The upper straight edge of the counterhoop acts like a knife when the stick comes in contact with it, like with rimshots.

The evolution of the counterhoop went something like this: We got rid of the obstacles—claw hooks attached to the straight edge of the counterhoop design (no flanges). Then we dumped the claws and designed an integrated T-rod receiver in the single- and double-flanged hoop designs. Then finally—eureka!—the triple-flanged hoop was invented, where the upper lip of the rim is flanged, resulting in fewer trips to the drum shop for new sticks. Again, here’s the small details/big differences philosophy at work.

Do you have any information on the old Slingerland Stick Saver hoops?

Slingerland reversed the upper flange, facing it inward toward the center of the head. I have a couple of Slingerland drums with the reversed flange. Design tweaks like this are even smaller in detail compared with the three hoop types. I say try it—whatever floats your boat.

Have you ever combined different types of hoops, such as using die-cast on top and triple-flanged on the bottom? If so, what kind of effect does this achieve?

Oh, yes! There are treasures to be uncovered by combining hoop types on a single drum. For instance, on the snare drum I often use a die-cast hoop on the snare-side head to control overtones—coloration—and, to a degree, excessive snare buzz. But I’ll use a flanged hoop on the batter side to encourage more complexity in tone. Depending on the type of drum shell, I might switch the mix. Again, let’s remind ourselves that sound is subjective. My motto is: If it sounds good to you, then it’s a good sound. 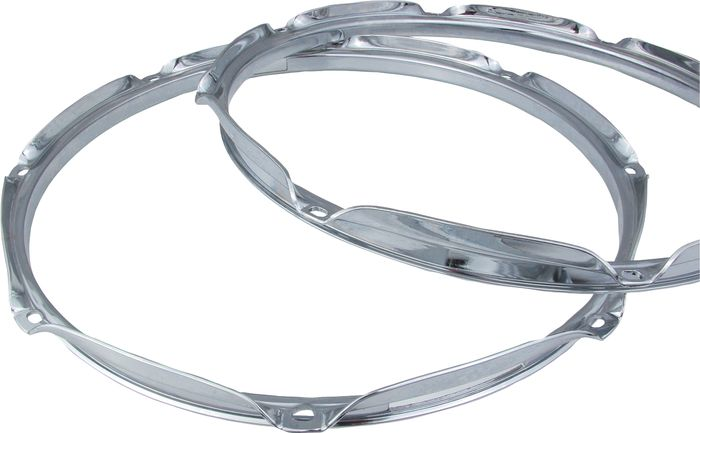 Types of Hoops and How They Affect the Sound

Wood: very focused sound, edge of head is very controlled, shortest sustain (depending on the thickness of the hoop)

The bottom line is that die-cast and wood hoops add control and help focus the overall sound. This happens mainly because they are less flexible and heavier in weight than flanged hoops. As a result, the head does not vibrate as freely as it would with a flanged hoop. Flanged hoops are lighter in weight, more flexible, and not as rigid as die-cast or wood. The overall effect of flanged hoops is that the drum will show its true colors, pretty or not.

Other hoop styles, such as Slingerland’s inward-flanged Stick Saver, Big Bang’s flat-flanged S-Hoop, and Dunnett’s wood/metal hybrid, combine different elements of the three main types, to produce different sounds and overtones and, in some cases, to help your sticks last longer. The more you know about a drum and how the counterhoops affect the sound, the easier it will be to achieve the sound you’re after.