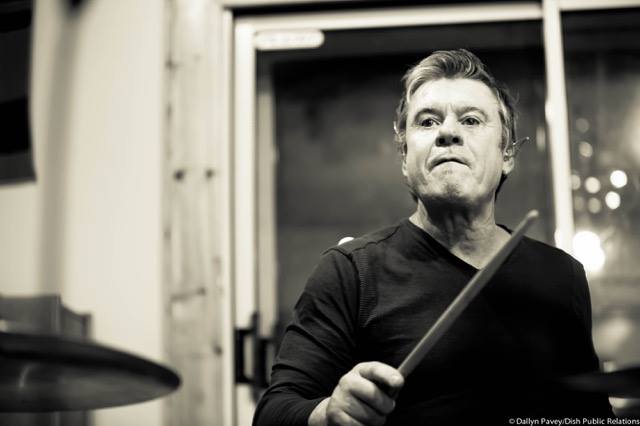 Hi, everybody! David Uosikkinen here. I’m probably best known for my work with the Hooters, the band I’ve been playing music with for thirty-five years. It’s been a great ride and I’m grateful to have been on it.

In addition to playing drums with the Hooters, I have a project called David Uosikkinen’s In the Pocket. I’m recording songs that inspired me growing up in Philly and pay homage to the songs and artists that made me who I am today. We record the song and make a video documentary of the session. No genre is exempt. I just recorded “Punk Rock Girl,” originally done by the Dead Milkmen. Each session has a different group of some of my favorite musician friends playing on it, so it keeps things fresh.

I’m also a full-time member of Smash Palace, a band with great players and songs. Fran Smith from the Hooters is also in the band, along with Steve Butler, Cliff Hillis, and Wally Smith. Additionally, I’m the drummer in Joe Nicolo’s stable of musicians that he uses on Blackbird Productions recordings, most recently playing on upcoming releases by Bret Smith, Gooch Nelson, and Arrows Down.

The Hooters have a tour starting this spring called “35 Alive” in honor of our thirty-five years together as a band. I love my bandmates! We all have been through a lot together, and touring celebrates it. I had a hip replacement two years ago. We did a show two my months after my surgery, and these guys were pulling for me. The way I stay fit is being active, and I pay attention to what my body is telling me. I get up from the drums from time to time and walk or bounce around. Also, I eat right, and getting plenty of rest is a big deal.

I’ve been playing DW drums and using their hardware since 1990. The drums and the people there are great. I feel the same way about Zildjian cymbals. I use a variety of bass drums, size 20″ to 24″, and 13″ to 16″ hi-hats, depending on what’s needed. I like a 20″ crash on my left and a 16″ and 18″ on my right by the floor tom. I like darker-sounding ride cymbals, 20″ and 21″ Ks. I use two toms, small and large floor toms, and a dread snare—a snare drum with no bottom head and no bottom rim.

I have a variety of snare drums—like a lot of drummers I buy them and keep ’em forever. I dig them all. I have a Select 5.5×14 snare drum I got from Robert Hall in Memphis while recording a Hooters record at Ardent. I love that drum, and I think it’s only one of thirty made. I also use a Roland SPSX for loops and clicks on my live shows.