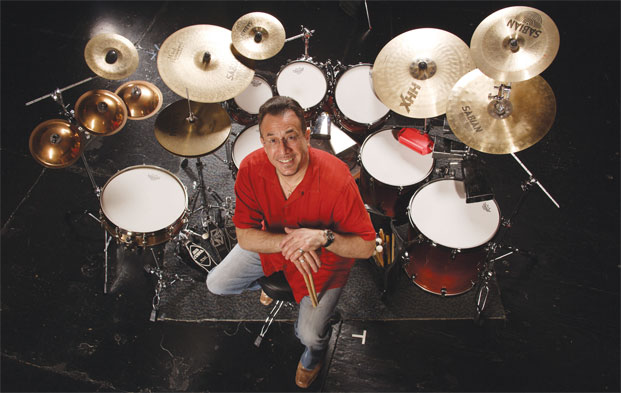 The renowned Latin and jazz drummer/percussionist has always known how to get his point across, whether in the studio, on stage, or in the classroom. Here he offers words of advice that all of us, regardless of age or preferred musical style, should take heed of.

1. Check out clinics other than just drum and percussion events.

The fact that so many demands are placed on a drummer/percussionist behooves you to take a look at how other instrumentalists approach things. You’ll learn a lot by checking out how a saxophonist, bassist, keyboardist, trumpeter, trombonist, guitarist, violinist, etc., thinks. And don’t forget clinics by orchestral percussionists, arrangers, composers, and songwriters as well.

2. Don’t put down a musical style that you don’t know anything about.

People who say a certain style of music sucks are really telling you they know nothing about that particular style. Simply stated, they’re ignorant. All styles of music have something to say and have technical idiosyncrasies and an inherent vocabulary and syntax that require study. Let’s face it: All of us have musical preferences. We all have different preferences for food as well. But it shouldn’t make you a snob. Just think about it—the style of music you may love above all others wasn’t born in a vacuum. You’ll find that it draws upon various elements from other styles. So get off your high horse and keep an open mind. When in doubt, shut your mouth.

3. Strive to become a better musician.

Ever wonder why there are so many drummer jokes? Question: How many people in the band? Answer: Four—three musicians and a drummer. It’s a classic, and you don’t have to be a musician to understand it. Drummers get a bad rap. But we’re at the vortex of everything. Want to make a mediocre band better? Get a good drummer. So it would be logical to assume that the drummer should be the most knowledgeable musician in any group. Strive to be a good musician, not just a good drummer. You’ll learn how to play what’s appropriate a lot quicker. And you have some great role models.

Max Roach got his degree in composition from the Manhattan School of Music. Tito Puente studied at Juilliard and was not only a great timbalero but a terrific drummer, vibes and marimba player, percussionist, composer, and arranger. Louie Bellson was a great composer and arranger. Phil Collins is a great songwriter. Dave Grohl is a versatile musician who plays guitar, bass, keyboards, and drums. Dave Garibaldi is a great teacher, and his writings on funk can be compared to scientific treatises. Yours truly is a proud graduate of the Berklee College of Music and has arranged and composed for everything from small group all the way to big band. Don’t believe me? Check out my two Grammy-nominated big-band CDs, Live & In Clave!!! and Big Band Urban Folktales.

The point is that being a better musician makes you a better drummer, and who doesn’t want to be better? So always try to become a better musician, and maybe next time you’ll be the one telling the guitarist what chords he should be playing on that tune you’re rehearsing.

4. Be as versatile as possible.

We live in exciting times, and the demands placed on drummers today are far more expansive than ever. The world has become a smaller place, and the drummer is at the center of that world. Whether you like it or not, you should strive to be as versatile as you possibly can be in this brave new world. I’ve had great success in my career because of my versatility as a player. Learn as much as you can about as many styles as possible, which obviously includes listening to as much varied music as possible. With today’s Internet access, it’s easy to do this. You’ll find out one surprising thing: Varied styles have more things in common than differences.

5. Avoid negative energy as much as you can.

This is harder to do than you may think. The very nature of the music industry attracts a heightened sense of the absurd in terms of certain types of people. Avoid negative people, places, things, and habits. If you’re hanging out with a bunch of musicians who are always downing other players, styles, etc., get out of Dodge. They’re wasting your time and sapping the life out of you because they have nothing to teach you except that they’re in a bad place. Always be positive, especially if you can’t avoid one of these situations. Who knows, your positive energy might enlighten one of those people that Jaco Pastorius, the legendary electric bassist, used to call groove killers.

This goes back to my advice on being versatile. In the culture I come from, we have an ethos of one player being versed on a multitude of percussion. Think it’s hard? It is. But remember, the drumset is the ultimate percussion instrument in that you utilize all of your limbs to play it. So you have an advantage. As a drummer, learning various percussion instruments will make you a better player. It’ll change your approach to the instrument in that you’ll be drawing on more sources of inspiration, and you’ll be a more valuable commodity. And I’m not just talking about learning hand drums. I’m talking about learning orchestral percussion as well. The same holds true if you’re a percussionist and you start learning drums. Your coordinated independence will improve, you’ll think in different musical terms, and, again, you’ll become a more valuable musical commodity.

As I stated before, nothing is born in a vacuum. History is the best teacher. If you think that all of sudden you’ve invented something completely new on drums and/or percussion, you’re in for a big surprise. In one way or another, it’s been done before, or it’s rooted in something that was done before. Every style of music has a history and a lineage of players who have contributed to that history. If you study that history, you’ll learn a lot more about the style and be able to play it with more musical authenticity and, most of all, more respect.

Curiosity may have killed the cat, but it never killed a musician. Always be inquisitive. It’s a terrific teacher. The great Ed Shaughnessy once said in the pages of Modern Drummer, and I’m paraphrasing here, that finding a good teacher (or teachers) will get you there faster than if you just try to do it on your own. ‘Nuff said.

Be a good teacher—pass it on. You may be asking yourself, Who, me? But every time you share a musical thought with a fellow musician, you have the potential of being a good teacher. It could be as simple as noticing something a fellow drummer is doing wrong and saying, “Hey, you were doing something there with your foot. If you try this, I think you’ll see you can do it in an easier way.” So remember, you have the potential and the responsibility to pay it forward in our noble profession.

Before you start saying, “This guy’s been watching too many episodes of Dancing With the Stars,” think about it. What do Buddy Rich, Louie Bellson, Lionel Hampton, Tito Puente, and Steve Gadd all have in common? All of them were/are great dancers. And that’s just the short list. There have been some great dancers who could really play drums. Sammy Davis Jr. and Fred Astaire come to mind. Dancing used to be a great part of our mainstream culture. But there’s hope, you! Want to learn something about counting off the right tempo, groovin’, cookin’ with gas, and droppin’ it in the slot? If you can stand up, you can dance. Maybe some of you can break-dance. That’s great, but it’s a solo dance. I’m talking about dancing in couples. Someone has to lead, someone has to follow. Hmm, sounds a little like being a musician. So get on the good foot, pilgrim—you’ll be glad you did.

10.Make sure you say thank you.

Courtesy and graciousness are a dying form of human expression. I always tell my students to make sure they thank anyone who has contacted them for a gig, given them a particular tip, or showed them something that enhanced their playing or opened a door of opportunity for them. Those two words go a long way in acknowledging that you’re grateful for someone helping you in your journey. And that especially goes for meeting a musical elder who has given us wisdom. As they say, to wisdom, the prize. So thanks, Modern Drummer, for asking me to do this, and thank you for taking the time to read my thoughts.

This piece originally ran in the April 2010 issue of Modern Drummer magazine. To learn more about Bobby Sanabria and to keep up with his activities, go to bobbysanabria.com.

Josh Garza: A Bonham Disciple Carves His Own Path