This article originally ran in the Sept/Oct 2011 issue of Drum Business.

At first thought, it might be easy to write off any bass drum pedal as a simple combination of footboard and beater. After all, how many ways can there be to strike a kick drum? To those non-drummers out there, it probably seems as elemental as step on a pedal, make some noise. But there are many different pedals on the market, with various features to suit each individual’s taste.

Of course there’s the obvious distinction between single and double pedals, but when you take a close look at each available option, you find a staggering amount of variation. Chain or belt drive? Single or double chain? What about direct-drive pedals or longboards, in contrast to the standard split footboard? By the time you’ve finished this article, you’ll have the knowledge necessary to find the right pedal for your needs.

When we talk about pedal drives, we’re describing the mechanism that connects the footboard to the beater, allowing the pedal to function. The three main types are chain, belt, and direct drive.

Chain-drive pedals are the most common among drummers, and there are two types: single chain and double chain. Jim Haler of Yamaha says, “In most cases, the double chain’s main advantage is durability under extreme use. There is also less of a tendency for a double chain to flex from side to side, thus reducing friction and side-to-side movement.” 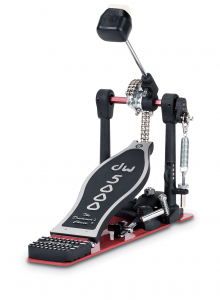 The double-chain drive is more prevalent than its single-chain counterpart, with the latter being most common on entry-level pedals or models designed to be less expensive. But as Scott Donnell of Drum Workshop points out, that often falls to perception. “Initially, we moved to a double-chain-and-sprocket design on our classic 5000 series pedal to add more stability,” Donnell explains, “but it doesn’t necessarily make the pedal more playable. The single chain and sprocket is still found on our retro-inspired 6000 series pedal, and it’s a quick, responsive pedal. In fact, some of our artists request a custom single-chain 5000 to this day. Again, it’s all about perception. Today’s players see single chains on less expensive models, so they think it’s a lesser pedal.” 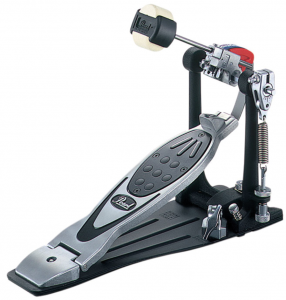 Belt-drive pedals, as you might imagine, replace the linked chain with a solid belt, reducing friction and (in some drummers’ opinion) leading to a lighter feel. In the past, belt drives suffered from having a much shorter life in comparison with chain-drive models, but today’s belts have drastically improved in terms of durability. Pearl, for one, crafts its belt drives from the same material that conveyor belts are made from. “A modern belt is just as dependable as a chain and maybe even more so,” Pearl’s Gene Okamoto says. “Master links sometimes fall off chains and give the appearance that the chain is broken, even though the links are okay. Belts don’t have master links and modern belts are very robust, so the failure rate is extremely low. In addition, you can monitor wear on a belt, whereas on a chain wear is less obvious. Chains are flexible and can collapse onto themselves on the upstroke when you’re playing. When this happens, control is lost for a split second. Belts, on the other hand, are stiffer and give a better connection between the footboard and the beater—they act somewhat like a direct-drive pedal in this regard.” 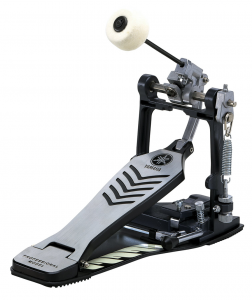 Direct-drive pedals feature a solid bridge between the footboard and beater. This maintains a perfect connection throughout the entire stroke, with no chance of any of the flexing or give that can occur with chains or belts. This can lead to increased response, power, and control. As such, direct drives are often popular with drummers who place high value on speed, precision, and technique—though this, too, can be subjective. “Many heel-down players that I know prefer a direct-drive pedal,” Haler says, “but heel-up players have told me that direct-drive pedals are less controllable than a chain or belt drive.” 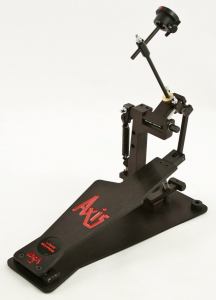 Footboards can come in all shapes and sizes, but the most important distinction is between the standard footboard and the longboard version. Most pedals have a hinge by the player’s heel, providing a flat base at the end that does not take part in the playing action of the pedal. By contrast, longboard pedals lack that hinge, so the entire length of the footboard acts as a viable playing surface. The longboard style is particularly popular with drummers who utilize heel/toe or rocking techniques in an effort to facilitate rapid double strokes. Longboards can also give increased comfort to players with larger shoe sizes.

Cams are the assemblies that attach the drive to the beater and supply the radius around which the drive will pull the beater in response to the footboard. The two types are linear and offset. Okamoto gives a very useful description and delineation of cams: “Linear cams maintain the same radius throughout the travel of the beater, and the beater speed is constant from the beginning to the end of the stroke. Direct-drive pedals and pedals with round cams are examples of linear-drive pedals.

“Offset cams generally accelerate the beater as it gets closer to the head. Offset cams typically have a nautilus shape, where the radius increases from the center. When the beater starts its rotation, the radius and leverage are at their greatest and the feel of the pedal is light. As the beater gets closer to the head, the radius and leverage decrease and the feel gets heavier. Many drummers experience a whip action and a sudden burst of speed at the end of the stroke, especially from cams with the greatest difference in radius. Pearl’s Eliminator pedal features patented interchangeable cams that allow the drummer to choose from two linear and four offset cams to customize the pedal to his or her preference.”

Like Pearl’s Eliminator, some other models aim to maximize the player’s range of choices via pedal customization. For example, DW’s 9000 series features an infinitely adjustable cam.

It’s All a Matter of Opinion

This article gives only a glimpse at the range of variability within bass drum pedals, and ideas and opinions on the same features often differ among drummers. Are you daunted by complexity and customization and yearn for straightforward playability and the beauty of simplicity? Perhaps you’ll agree with Jim Haler at Yamaha, who says, “I think some pedals have a lot of features that are more the ideas of engineers, not drummers. For every independent adjustment, that’s another screw that can be stripped, another place for dirt to accumulate, or another chance for a squeak or a rattle to occur. Rather than spending a lot of time fiddling with adjustments, I want to sit down at my kit and play. You can tweak the feel, but I like that our pedals are simple and well built, and they feel great out of the box so you don’t have to mess with them. 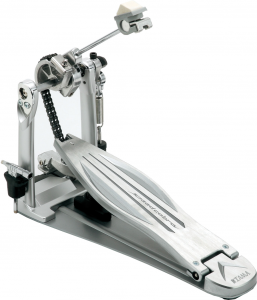 “For example, we still make two very nice pedals—the FP-7210A single chain and the FP-8500B belt drive—that don’t have solid base plates. They fold up nice and compact for storage and transport after the gig. A lot of drummers want a simple, reliable pedal that plays great and doesn’t need its own case to transport it.”

But maybe you like to stay on the cutting edge of pedal technology. In that case you can look into Pearl’s Demon Drive, Tama’s Speed Cobra, or Axis’s A21 Laser pedals, to name a few. For the extra-adventurous there’s the unique symmetry of Sleishman’s double pedal or the many iterations of Duallist’s multi-beater pedals. Whatever the case, as long as you’re familiar with some of the basic concepts, you and your drumming clientele can find a world ripe with inspiration.