From the  January 2015 issue of Modern Drummer magazine.

The tireless Canadian takes a crack at the time-tested center-bead shell…and wins.

In 2012, inventor/drum builder Ronn Dunnett released the R4-L, a version of his popular swiveling R4 throw-off that incorporates a cutout to accommodate the center bead found on Ludwig and Ludwig-style metal snares. While the R4-L works great for Ludwig users, Dunnett didn’t offer any drums with a center-bead design. So what did he do? He came out with three models of his own, the 2N-SS stainless steel, the 2N-B brass, and the 2N-A polished aluminum. We were sent 6.5×14 versions of each to review. 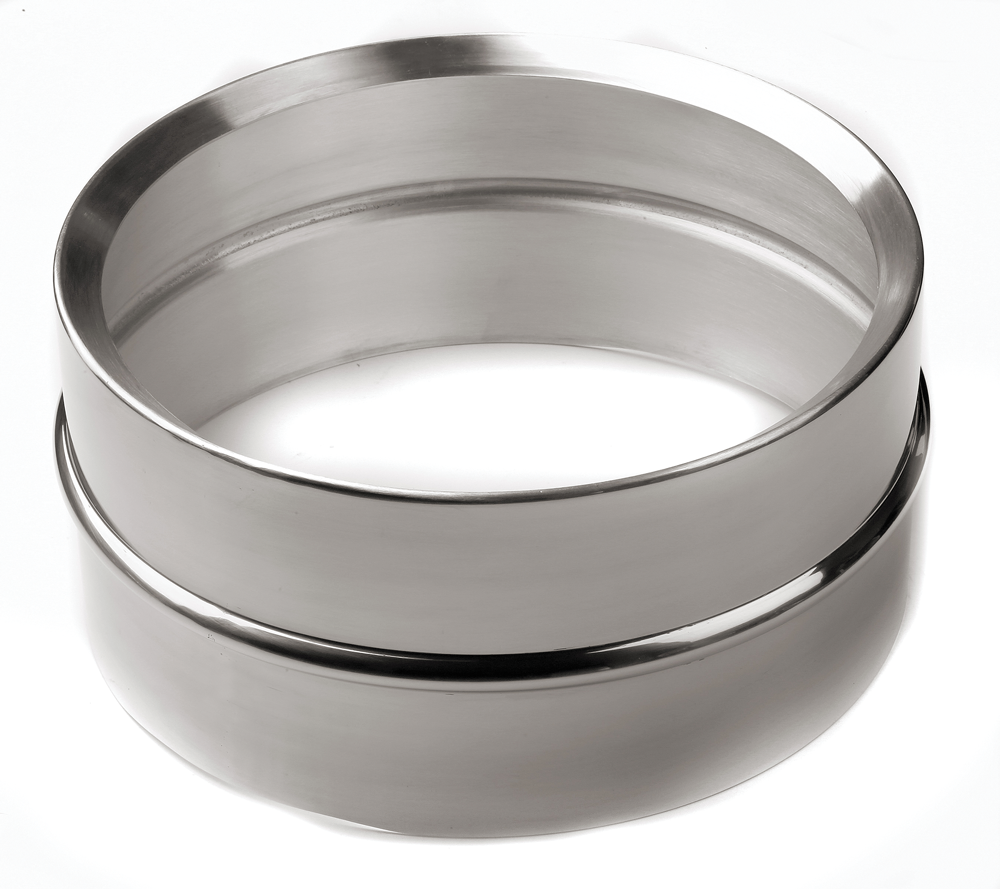 A professed lifelong fan of Led Zeppelin, John Bonham, and the drummer’s beloved Ludwig 402, Dunnett began his quest for the ultimate center-bead shell with a material he was already familiar with, the same one he used to build Ludwig’s Bonham tribute kits: stainless steel. This snare, the 2N-SS, features triple-flange hoops, eight tube lugs, the R4-L throw-off, forty-two-strand Dunnett Presence wires, a Remo Coated Ambassador batter head and Dunnett Cristal snare-side, an adjustable air vent (called Hypervent I), and a red snare ribbon and matching plastic tension-rod washers. The drum weighs 11.5 pounds, which is hefty but not unusually so. As with most Dunnett metal snares, the edges are straight (not flanged), and the snare beds are meticulously shaped so that the wires sit flat and evenly against the resonant head.

Dunnett describes the 2N-SS ($699) as being “warm, focused, and delightfully sensitive.” I’d add to that description balanced, powerful, versatile, and pleasantly bright. This bad boy is a strong contender for the title of ultimate workhorse, which we can infer was part of its design, given that the name 2N is an homage to Dunnett’s cherished Ford tractor from the ’40s.

Tuned tight, the 2N-SS was ultra-articulate, bright, and popping and had a short decay, making it great for funk, R&B, and modern jazz. Medium-tight tunings (my personal favorite) had a lot more body, spray, and throatiness, while retaining a strong crack, and the drum sounded great in the studio as an all-purpose pop/rock voice. Lower tunings brought out the most punch from the stainless steel shell but with minimal overtones, thanks to the muting quality of the center bead. Snare sensitivity was supreme at all tunings. If push came to shove, I’d say get one of these drums and call it a day. But we have two other equally impressive snares to talk about first. 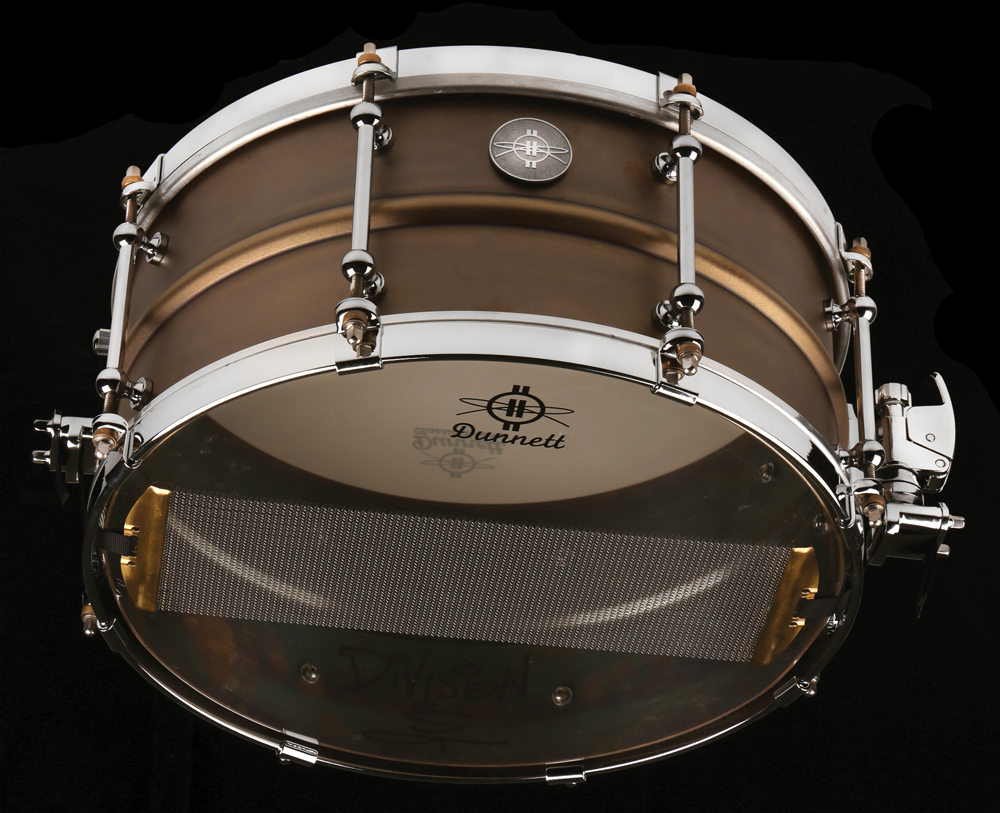 Following the success of the 2N-SS, Dunnett released the 2N-B brass model. This drum was originally offered with a hand-applied patina finish, but the latest incarnation features a rough sandblasted outer surface that gives the drum a rugged industrial appearance that will change over time, depending on how often the shell is exposed to fingerprints and various environmental elements. It too comes with forty-two-strand wires, eight tube lugs, a Hypervent I adjustable vent, an R4-L throw-off, and a Remo Coated Ambassador batter and Dunnett Cristal resonant head. The tension-rod washers are colored to match the brass shell, the wire ribbon is black, and the shell is unflanged at the edges. The rims on our review drum were Dunnett’s unique CR straight hoops, held in place with large clips.

The 2N-B ($699) is already a favorite among a few players, including alternative-rock great Matt Cameron, who’s used one of these drums on tour with Soundgarden. Weighing in at 14.5 pounds, this is a big, powerful snare with a strong, focused voice that will cut through in any style of music, especially when tuned to a medium tension and higher. It’s not a vintage-style, early-twentieth-century brass knockoff. In fact, I’d put the 2N-B in closer proximity to the strong, no-BS sound of the highly coveted bell brass snare. My favorite sound from the 2N-B was with the batter head detuned almost all the way and the snare wires rather taut, for a fat yet ultra-articulate Steve Gadd–type tone.

While the 2N-SS and 2N-B are Dunnett’s unique slant on the classic center-bead shell design, it wasn’t until Ronn decided to explore an aluminum option that he went head to head with his own version of the beloved Ludwig 402. One feature of the 402 that Dunnett avoided with the 2N-SS and 2N-B was the flanged bearing edges, mainly because his method for installing snare beds is possible only on a straight shell. So rather than sacrifice the supreme sensitivity that comes with the Dunnett snare bed, Ronn simply kept the bottom edge straight and flanged the top. The result? The 2N-A ($699).

Aside from the flanged top edge, the 2N-A looks very similar to the 2N-SS, if just a bit less shiny. The aluminum shell is polished (not chromed), so it won’t pit or flake over time, and the tube lugs are made of aluminum instead of brass, which contributes to the 2N-A’s light weight (7 pounds). The top bearing edge extends a bit further inside the counterhoop than on the 2N-SS or 2N-B, which is a concern only if you like to play all the way out to the edge for extremely quiet dynamics.

Otherwise, this is another supremely sensitive, highly musical, and versatile snare that can produce just about any sound you want with a few twists of the tension rods. Again, the beaded shell helps break up the overtones, so no muffling is necessary unless you want to shorten the sustain for an ultra-dry tone. When compared side by side with an old 402 that I’ve used for many years, the Dunnett had a slightly darker and more controlled tone with fewer overtones but had a comparable open voice with plenty of bark. My favorite tuning for the 2N-A was right in the middle of its range, where I could accentuate the overtones by playing slightly off center or achieve a potent, focused snap by laying into it dead center. With the 2N-A, Dunnett didn’t simply remake a classic—he redefined it.