This article originally ran in the Oct/Nov 2012 issue of Drum Business.

The term effects, or FX, is applied to a wide array of cymbals, from tiny splashes to giant, oddly shaped sheets of metal to cymbals with tambourine jingles riveted to them. The key to finding that unique voice you’ve been missing in your setup is to know what’s out there. To follow is a rundown of the common categories of effects cymbals. 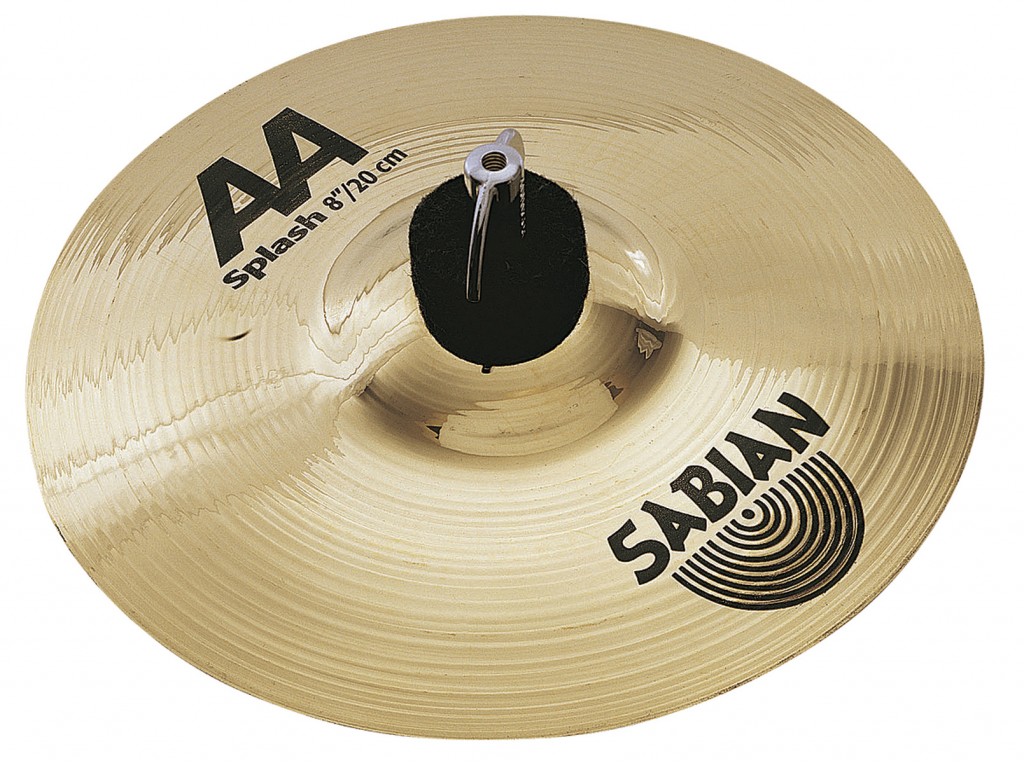 This small, generally thin accent cymbal has been around as long as the drumset itself. In fact, as the drumset first developed in the early twentieth century, the splash may have been the only cymbal, as hi-hats and larger cymbals were not yet in use. Splashes are typically available in sizes from 6″ to 14″, though the line between a splash and a small crash becomes blurred between 12″ and 14″. Splashes are available in a variety of weights and different alloy compositions, all of which will affect the sound of the cymbal. Buddy Rich, Neil Peart, Manu Katché, Stewart Copeland, and Carter Beauford are a few well-known purveyors of the splash cymbal. 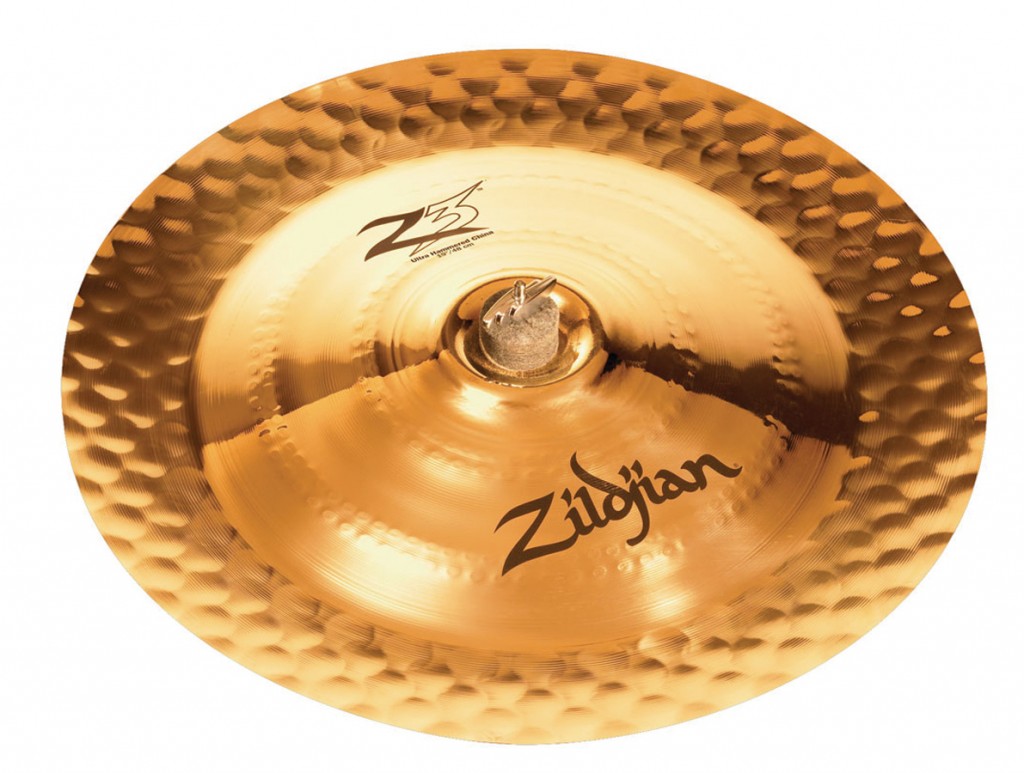 Known by many names over the years, China cymbals are also older than modern rides, crashes, and hi-hats. First imported to the U.S. and Europe from China in the early twentieth century, these trashy-sounding, staccato cymbals usually feature an upturned edge, or flange, that drastically affects the sound. The term swish refers to large, rounded-flange China cymbals with a more mellow sound, and a swish knocker is a swish with rivets installed. 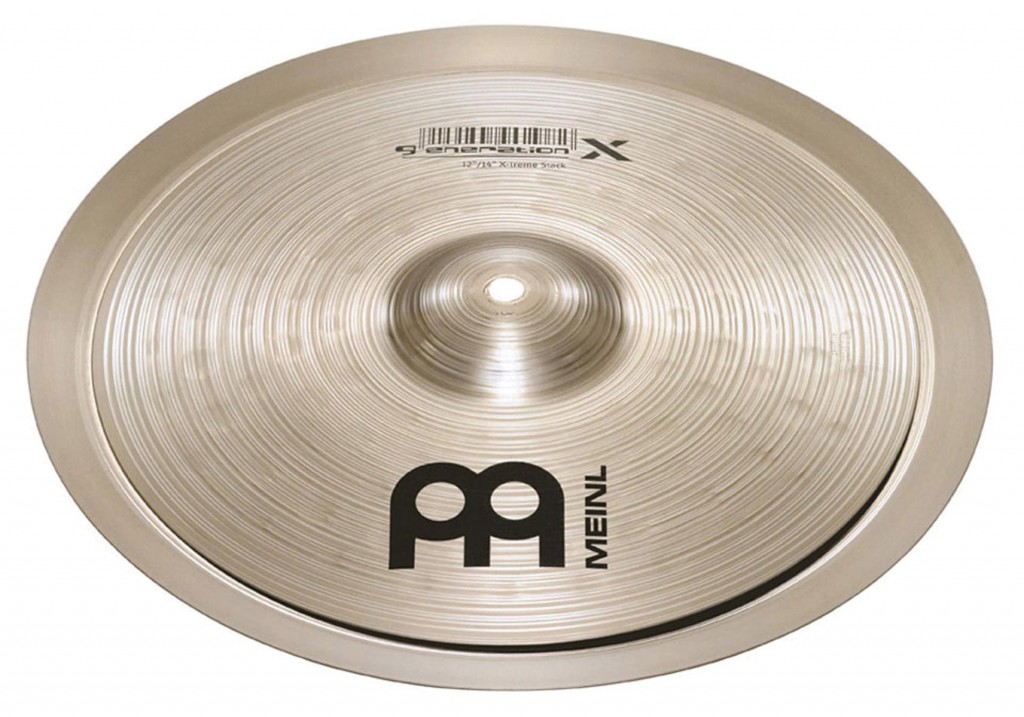 A stacker is a combination of different sizes and/or weights of cymbals. Drummers began to stack splashes and Chinas on crashes to create staccato effects sounds in the early 1980s, and the trend continues today. Dave Weckl and Terry Bozzio were early users of stacked cymbals and helped to popularize their use. These days, most manufacturers sell cymbals as stacks or offer single pieces intended to be stacked on other cymbals. 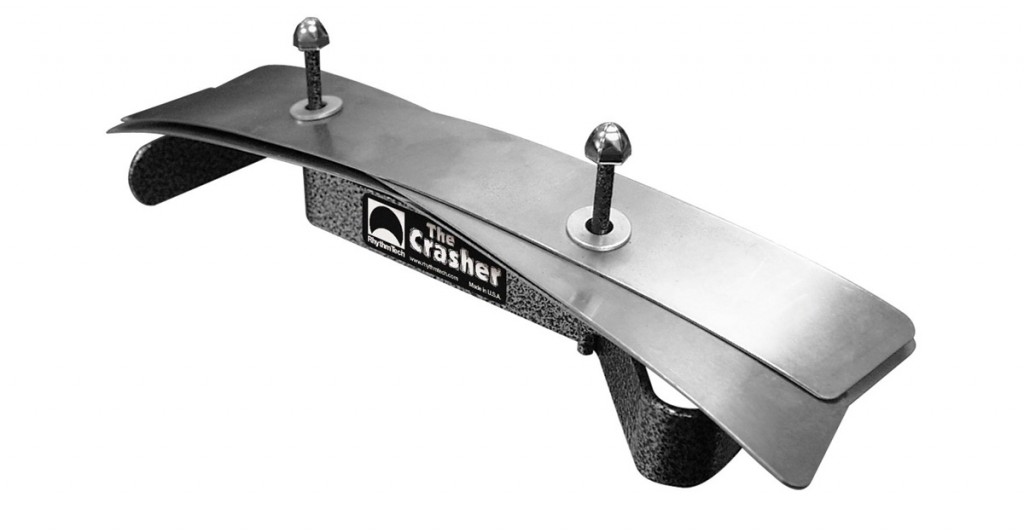 This instrument is typically constructed with a number of loosely overlaid metal ribbons held in place by a pair of vertical posts. Available in a few different sizes and types, crashers provide another staccato accent sound and are often favored by heavy metal and experimental drummers. Rhythm Tech and Pete Engelhart Metal Percussion are two brands offering crashers.

This instrument is similar to a splash, but it’s much thicker and produces a pure, chime-like sound rather than a short crash. Cup chimes aren’t tuned to definite pitches and are often used in fills by hard rock and metal drummers. The Zildjian Zil-Bel, LP Ice Bell, Sabian Alu Bell, and Meinl Classics Bell are examples of cup chimes.

These small, high-pitched models resemble tiny hand cymbals and are usually mounted on lengths of string or small nylon bands. Used commonly in orchestral and band literature, finger cymbals are not tuned to a definite pitch and are played by striking the edge of one cymbal against the other in a downward motion. 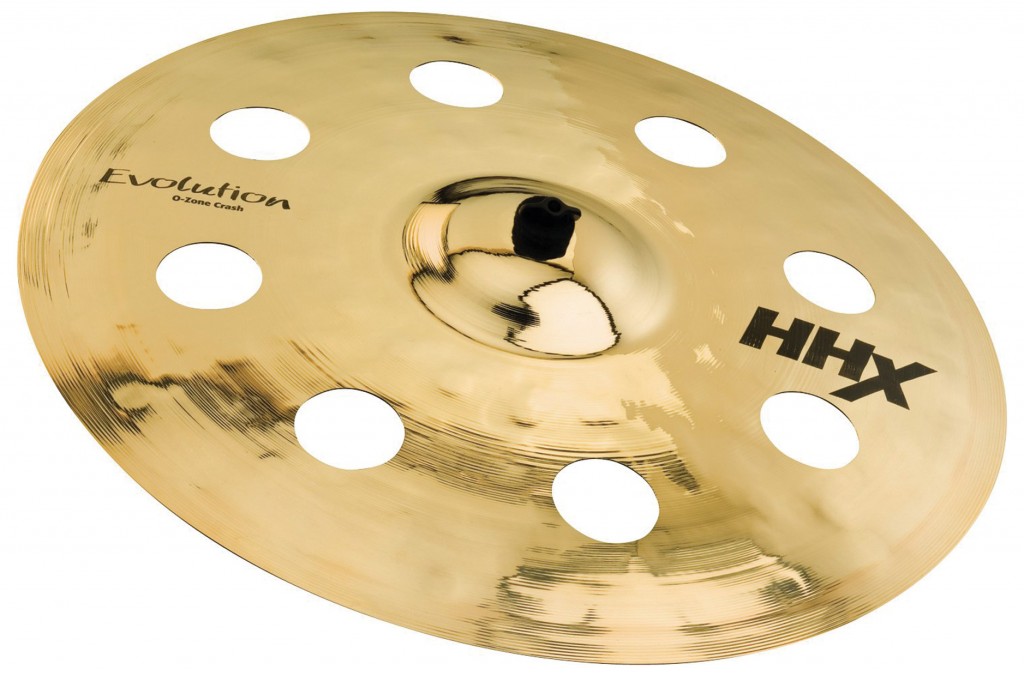 A recent trend among cymbal makers is to offer models with holes or notches cut into them, which creates a China-meets-crash-type sound. The Sabian O-Zone, Zildjian EFX, and Meinl Trash Crash are current favorites among many drummers. 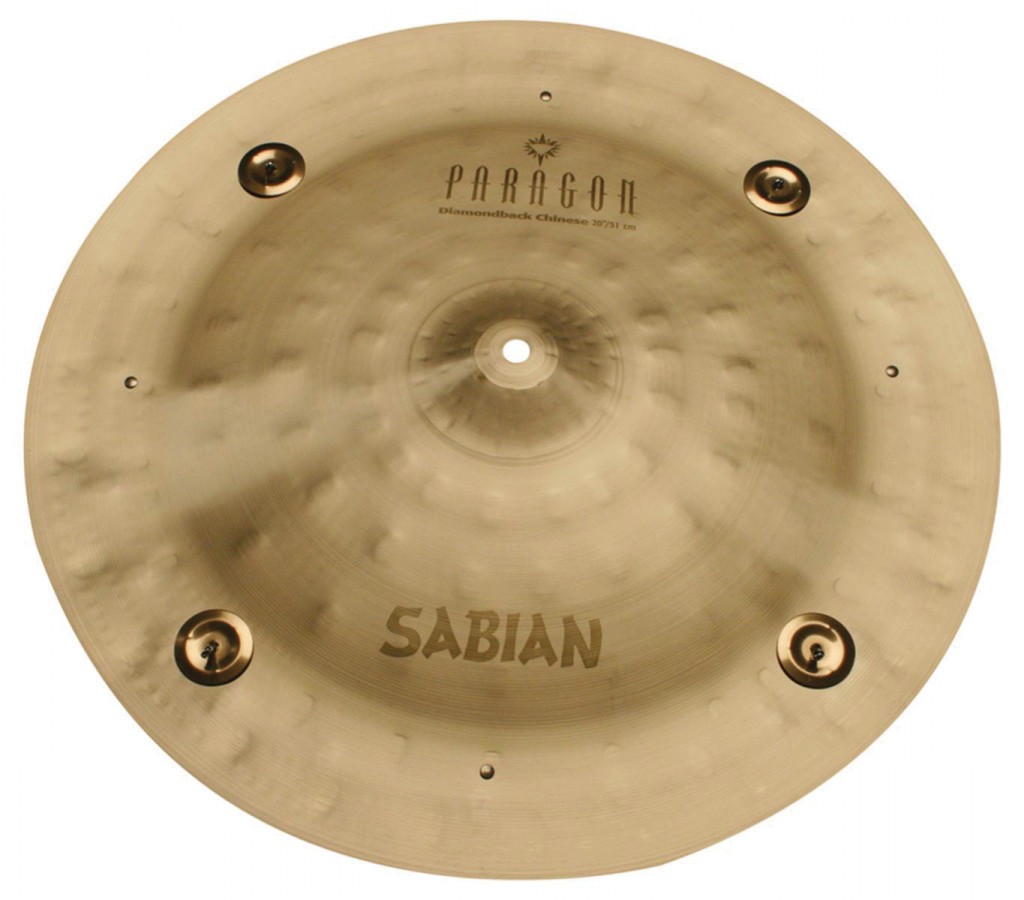 The practice of attaching objects to cymbals to modify the sound goes back to the development of the sizzle cymbal in the 1930s. Jazz drummers looking for a smooth, soft pad of sound began to drill holes in their cymbals and insert rivets of different weights and compositions to create a sizzling effect. The placement of the rivets has varied over the years, from being equidistant around the cymbal to the more modern practice of placing a few rivets near each other to temper the sizzle effect. Attaching tambourine jingles to cymbals is a recent innovation that produces an interesting variant of the sizzle cymbal. 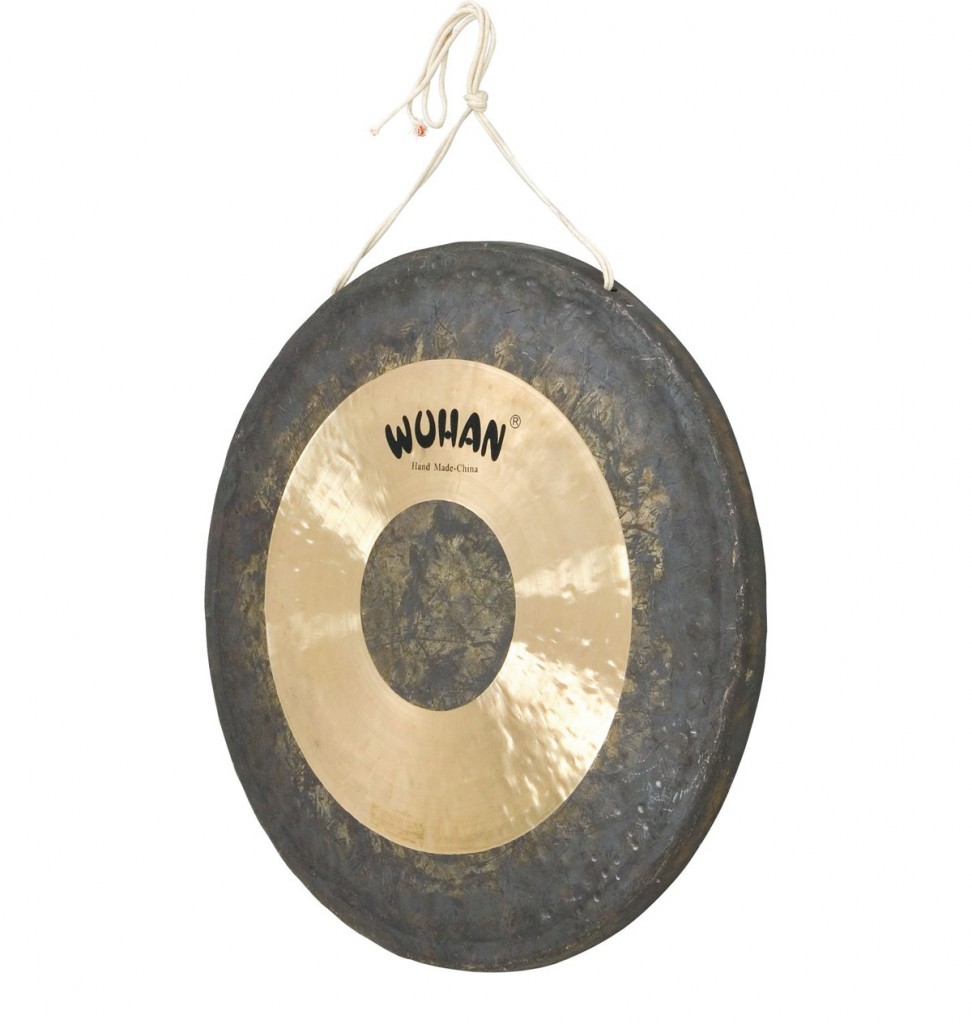 Gong is a generic term for an instrument made of a similar alloy to common cymbals but that is typically thicker, larger, and much lower in pitch. These pieces vary widely, from the tuned nipple gongs of Southeast Asia to the large, partially lathed tam tams, or Chau gongs, that many of us remember from band or orchestra class. A tam tam is generally an unpitched, flat gong with a rolled edge, that’s mounted on a stand and played with a mallet. This is the type of gong used by classic-rock drummers like Neil Peart, Carl Palmer, and John Bonham. Tam tams produce sounds from deep and roaring to brief and trashy, depending on the instrument’s thickness, diameter, and lathing. Wind gong has been used as a product name by Wuhan and others and most often refers to a thin, fully lathed gong that produces a shorter, higher-pitched sound most commonly used for accents and large impacts. (Dream calls its wind gong Feng.) Tam tams and wind gongs are often used in school band and orchestra programs.

These are small, pitched disks made of cymbal alloy that are arranged chromatically in the same manner as a keyboard percussion instrument or piano. Crotales are usually arranged in one-octave sets, and most manufacturers offer two full octaves that range from C6 to C8. Crotales are most often played with hard plastic or brass mallets, though they may be bowed using cello or double bass bows to produce haunting metallic sounds. 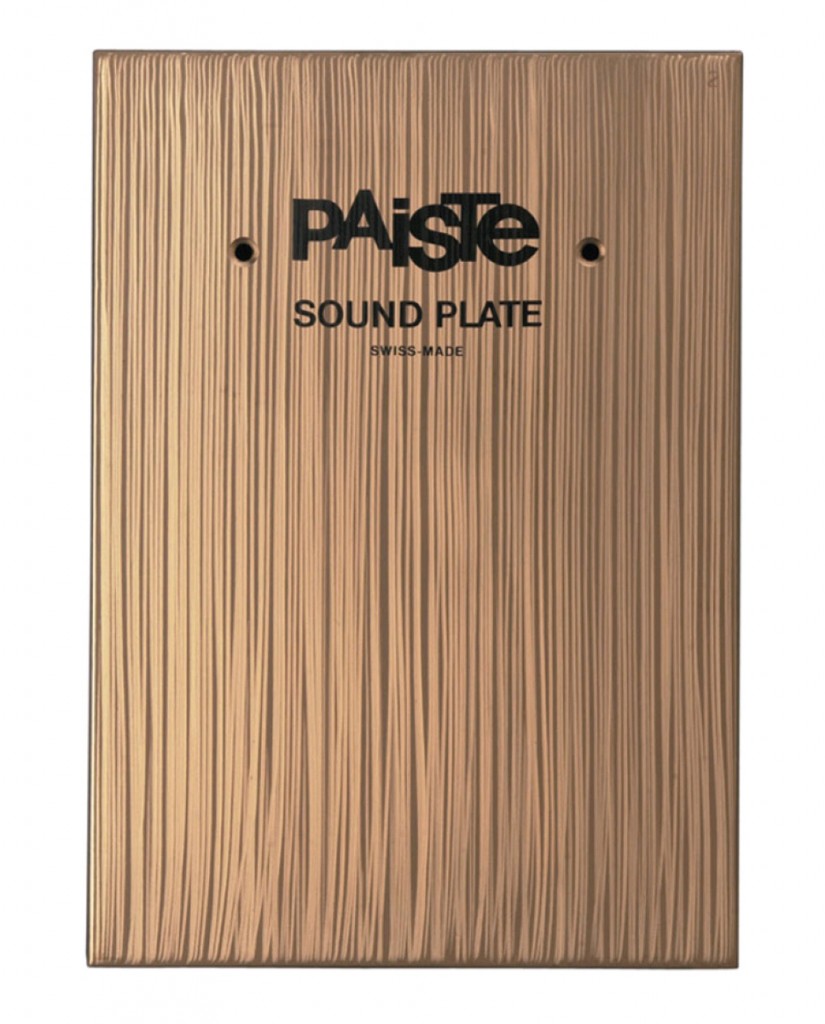 Sound Plates, Sheets, and Other Effects

To be found among the percussive offerings of many manufacturers are rectangular and ovoid plates made of cymbal alloy, thin sheets of hammered metal, spinning alloy disks, and other oddities. These items are designed as special effects and can be used in drumset, classical percussion, and commercial settings. Paiste’s Sound Plate and Rotosound, Zildjian’s Earth Plate, and many products by Hammerax and Factory Metal Percussion are examples that are included in this family of instruments.

Trashiness is a term used often to describe cymbals that have a less pure and more aggressive sound. China cymbals are the archetype of trashiness, though they can range from mild to downright epic in their level of offensiveness. Trashiness can be added to cymbals by cutting holes or notches in them or otherwise altering their shape. The Sabian Rocktagon, an octagonal crash cymbal first introduced in the 1980s, was an early example of a model that blurred the lines between a China and a crash. Many other innovations have since followed, including flattening or depressing the bell of a cymbal to add trashy overtones. Hand-hammered cymbals, like those offered by Dream, Istanbul Agop, Istanbul Mehmet, Bosphorus, TRX, Turkish, and UFIP, usually have a trashier sound than more modern, factory-made cymbals like Zildjian’s A Custom, Sabian’s AA series, Paiste’s 2002s, and Meinl’s Soundcasters. (Zildjian, Sabian, Paiste, and Meinl also offer hand-hammered selections with trashier, darker tones, in the K Constantinople, HH, Traditional, and Byzance series, respectively.)

When you’re looking for an effects cymbal, be sure to consider what its application will be, in order to find the right model. And don’t forget about common add-ons, like sticks, mallets, cymbal bags and cases, stands, boom arms, felts, washers, cymbal sleeves, and drummer survival kits, to go along with your new gear.