This article originally ran in the Nov/Dec 2011 issue of Drum Business.

By its very nature, the drumset can be the hardest instrument to mike. Guitarists, for example, have it easy: They have only themselves, their axe, and maybe an amp to deal with, whereas a drummer’s territory essentially comprises a collection of vastly different instruments. What works on the bass drum will usually not be ideal for the snare or cymbals. Factor in the sharp attacks and the propensity for high volume—depending on the style of the music and the player—and you need to be sure you’ve got the right microphone for the job.

In this article we’ll take a look at the main categories of microphones before delving into more specific drum applications and the various models and pre-packs available.

The most common types of microphones you’ll come across are dynamics, condensers, and ribbons. Dynamic microphones work through the process of electromagnetic induction—the production of an electrical current across a conductor in a magnetic field—and typically consist of a stiff plastic diaphragm with a finely wrapped wire coil suspended in a magnetic field. The large size of the diaphragm tends to require higher sound-pressure levels (SPLs) in order to begin to move and pick up signals, but drums easily meet this requirement. Coupled with the simple design and rugged build—dynamics have been known to survive drops, stomps, and the inevitable stick hit unscathed—it’s easy to see why dynamic mics have historically been the most prevalent around the drums.

Condenser microphones are quickly catching up to dynamics in terms of drumset use, and most setups will be a mix of the two types. Cliff Castle, vice president of sales and marketing at Audix, notes, “As a general rule of thumb, we find that dynamics are still most widely used for close-miking drums, and condensers—both pencil and large diaphragm—are most frequently used for overheads, hi-hat, and snare bottom. Also, we’ve seen a trend toward miniature condensers on rack toms and as ‘underheads’ for cymbals. They not only have nice performance characteristics, but they are very low profile and discreet.”

Condensers operate via the electrostatic principle (a stationary electric charge) and consist of two charge plates: one fixed backplate and another movable plate. There are no coils involved, making condensers more lightweight than other microphones, but these mics generally require an outside power source (referred to as phantom power) to charge the plates and boost the output signal. In terms of picking up a signal, condensers are also much more sensitive than dynamic microphones.

Like dynamics, ribbon microphones work via electromagnetic induction. Instead of a diaphragm, they use a thin aluminum ribbon suspended between the poles of a magnet. Ribbon mics generate a very smooth response but tend to be extremely fragile. Therefore they’re less commonly used around the drums; in older models, the SPL spike generated by the attack of a snare or bass drum could damage the ribbon. That said, newer ribbon models have become much more rugged. As Ryan Smith, regional manager of artist relations at Shure, says, “A ribbon mic can be great inside a kick drum. If the ribbon is built to withstand the SPL, it produces a very warm sound. Shure’s new KSM313 ribbon is extremely durable and can withstand being used in a kick drum as well as in front of a guitar amp.” 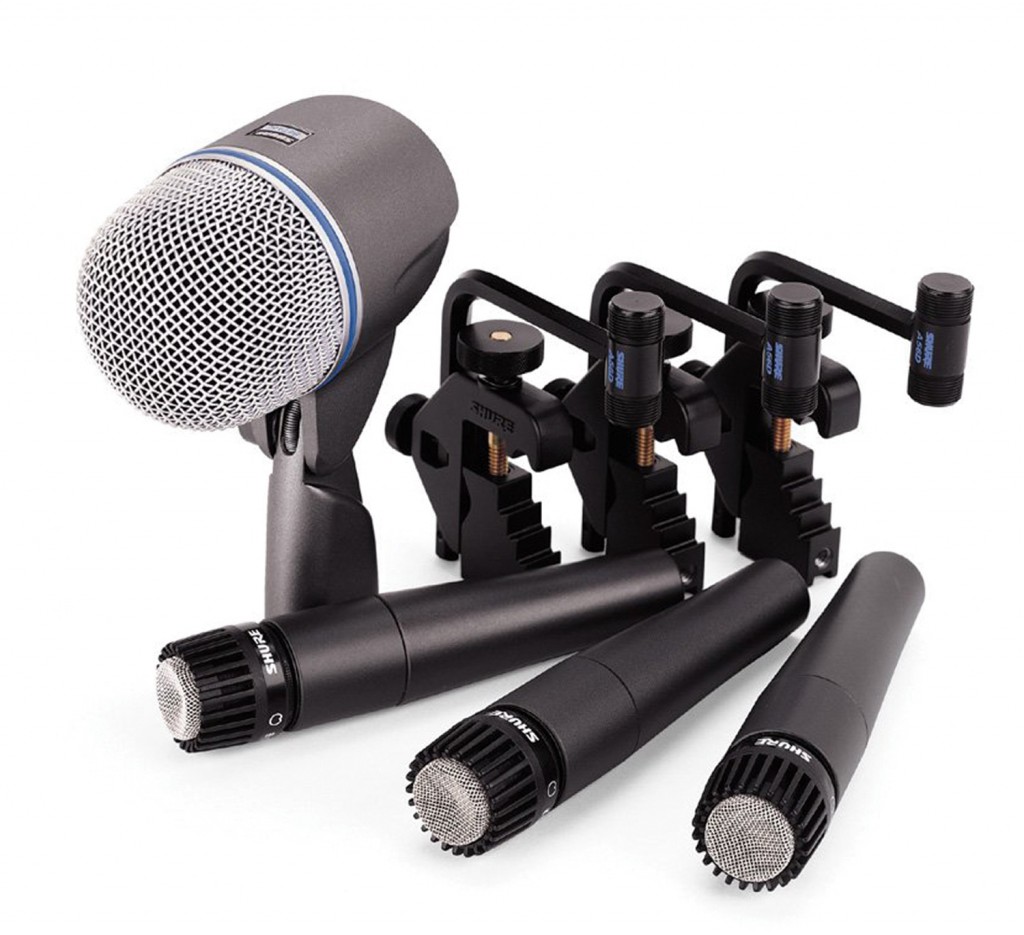 Miking drums, whether for live sound or studio recording, is a very subjective process. “The benefit of using all of these types of microphones,” Smith says, “is similar to an artist having many colors available for painting. In order to create an accurate picture of the drums sonically, you should experiment with those microphones that best represent the way your drums sound acoustically. Like the painter, you can also mix microphones together to get a better, sometimes more interesting representation of that instrument.”

But where do you even start? Over time, producers, engineers, and musicians have gravitated toward certain microphones that have become standard. First of all, the Shure SM57 dynamic microphone has become the super-utility mic for any instrument or situation; some engineers claim they can mic an entire stage using only that model. Beyond that, the SM57 has long been the go-to microphone for snare drums. For toms, Sennheiser 421 dynamics are extremely prevalent. And the Electro-Voice RE20, the AKG D12 and D112, and the Shure Beta 52A, all of which are dynamic mics, are common models for miking bass drums.


Companies have also developed lines of microphones increasingly targeted at drums and percussion. “In the mid-’90s,” Castle says, “Audix embarked on some unique designs for application-specific mics for drums and percussion, which became the D-Series. These were the smallest and lightest dynamic mics that anyone had produced, and they grabbed the attention of the professional sound industry for all types of instruments—but their popularity grew mainly in the percussion market. The series evolved into the current-day i5, D2, D4, and D6, all of which are widely accepted by the audio community as valuable tools for drums and percussion, both live and in the studio.”

Shure has also continued to develop new products, and some of the company’s condenser models have become “new standards.” A few of the choices are the Beta 98AMP/C, Beta 27, and SM27 on toms; the KSM32 as overheads; and the KSM137 and SM81 for hi-hats.

Many factors can affect which mics a drummer chooses. Castle and Smith agree that the number-one priority in designing a microphone to be used on drums or percussion is durability—especially live, where close-miking prevails. “They have to withstand not only the occasional stick hit,” Smith says, “but also general road use…or abuse: being pulled out of road cases, handled by many people, dropped by some, and stepped on by others. Then there’s the weather—traveling from 100-plus degrees down to negative temperatures, sometimes within a week of each other. The last thing we want artists to worry about is their microphone.”

On the subject of how musical genre affects mic choice, Castle adds, “In jazz, for example, the emphasis is more on the overall kit sound, so the assortment may just involve a couple of good overhead mics and individual mics for snare and kick. Whereas a rock setup will usually involve a mic on each drum—and many times a mic under and over the snare—a couple of overhead condensers, and a condenser for hi-hat. Also, in a live setup, the overheads could potentially be picking up a lot of bleed from the other instruments on stage, so they’re not positioned as high as with a jazz kit.”

So you have the types, models, and number of microphones you want—that should be it, right? Wrong. Where you place the microphones can often be just as important as which models you use. “An inch to the right or left, or up or down,” Smith warns, “can make a huge difference in what the mic captures. Before you pull that mic off in favor of another, make sure you’ve experimented with placement first.” 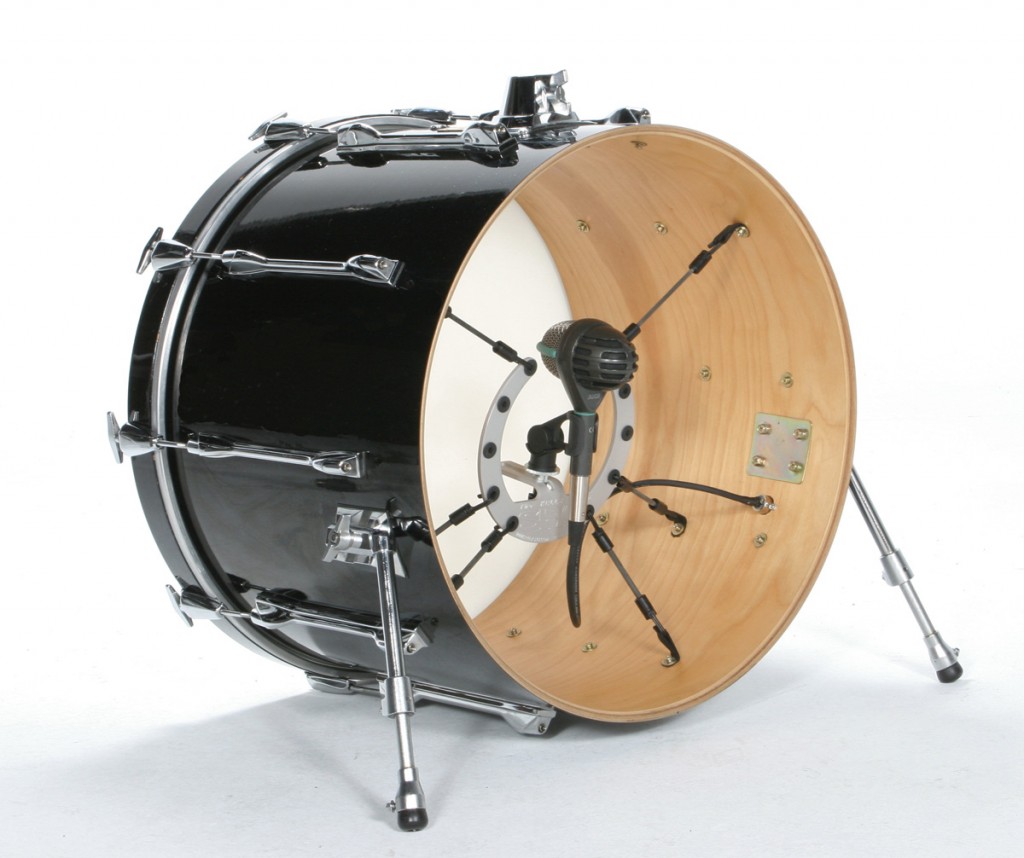 While some of the drum microphone pre-packs from Audix and Shure include mounting hardware, individual microphones often do not. For snare and tom mics, you might want to consider various rim/hardware mounts, like those made by Big Bang Distribution, Gibraltar, and Latin Percussion. For bass drums, a short boom stand, like a model from On-Stage, is a great option, but there’s also the Kelly SHU shock-mounting system (shown above), which suspends the microphone inside the kick or on the outside of the front head, and the May Internal Miking System, which consists of mic-mounting hardware that connects to lug screws inside the drum. 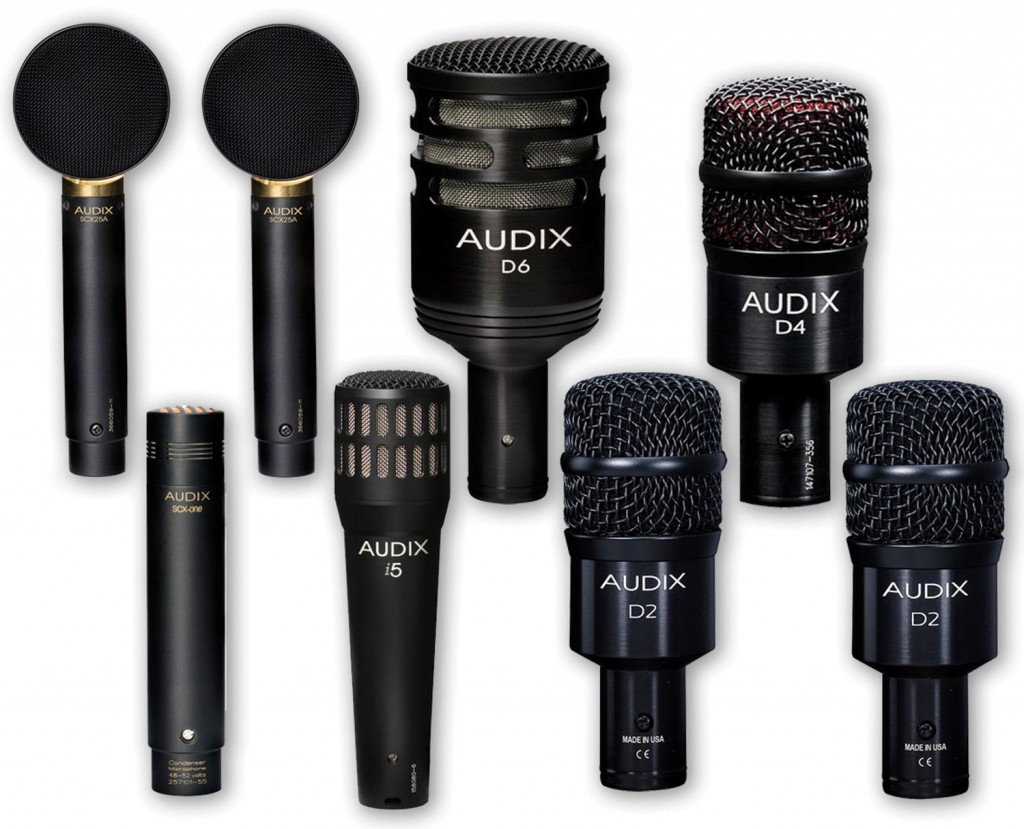 Although this spectrum of options and advice can be baffling to drum retailers and customers alike, you can breathe easy. In the realm of recording, there’s no right or wrong answer—it’s more art than science, after all. The information presented here is meant only to point you in the direction of some well-respected microphones and the basic techniques used to capture drums accurately. But, as Smith says, “In the name of experimentation, you may not want your kit to sound anything like it does. If you want a trashy drumkit sound, put a Shure 520DX—typically used on harmonica—down on the floor, close to the snare stand, and you’ll get this raunchy sound that’s great for drum loops. Have fun experimenting!”

Furthermore, companies like Audix and Shure are dedicated to making their products easy to use and easily accessible to a wide range of drummers. In recent years, microphone sets designed and packaged specifically for drums have become increasingly common. Shure offers four drum packs—two in its entry-level PG series (PGDMK4-XLR and PGDMK6-XLR); the DMK57-52, which includes three SM57s and a Beta 52A; and the Beta 98AMP/C-3PK, which is great for toms. Audix, meanwhile, offers eight drum packs. Five sets make up the company’s DP line—from the minimalistic four-mic DP-QUAD to the eight-piece STE-8 Studio Elite set. The last three packs (FP4, FP5, and FP7) comprise the Fusion series, which Castle describes as “priced at about 60 percent of the DP series, and closer to 85 or 90 percent of the performance.”


Regardless of whether you’re trying to choose a pre-pack to mike your entire drumset or you’re homing in on the right mic for one particular purpose, there are many options available, depending on budget and application. Do a little research, ask the right questions, and apply the info included here, and you should have no problem finding a great choice.