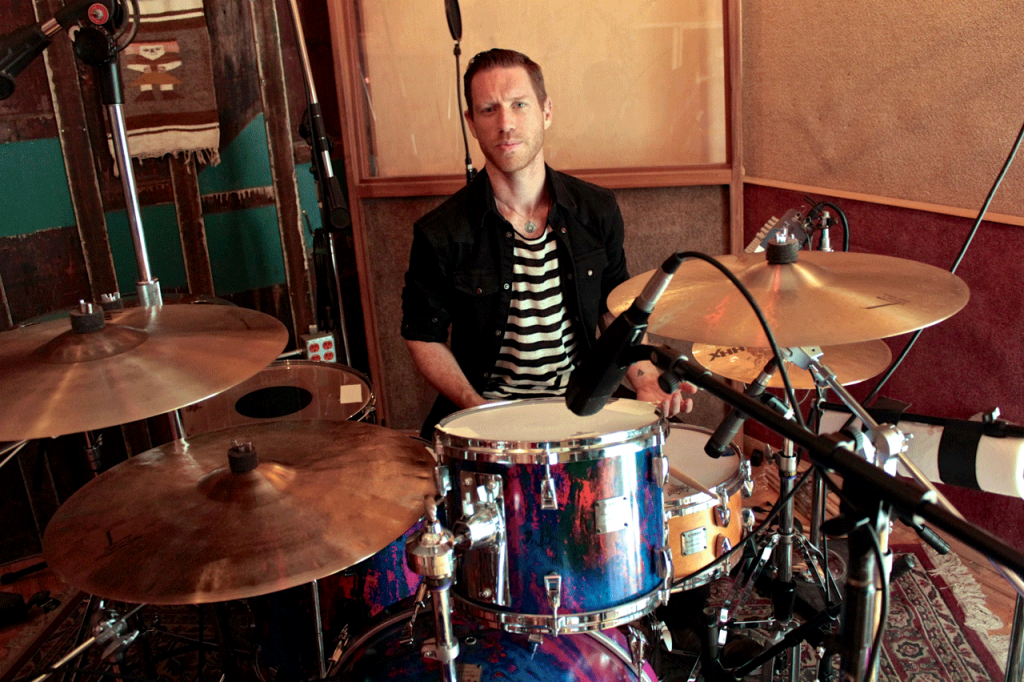 Good morning from sunny Los Angeles, MD readers! I’m Adam Weston from Oz band Birds of Tokyo. We’ve actually been based in LA the past couple of years, working amongst studios. We’re always writing, between touring and other commitments, at every chance we get. As soon as our last album, March Fires, was released, we went straight back into churning out ideas, which helps keep our well-oiled machine highly motivated and productive.

We’ve recently started drum tracking on our next body of work, and I’m fortunate, as usual, to be surrounded by a great team of peeps. This band thrives on vibe. Nothing is ever clinical, and normalcy is our enemy. With Adam Spark (producer), Doug Boehm (engineer), Jason Gossman (assistant engineer), Jarret Borba (tech), and the rest of the band as the peanut gallery, we take our craft seriously with equal parts of frivolity.

Recording used to stress me out a little, in that I always wanted to know the new material like the back of my hand, and smash it out in one take—or maybe fourteen. But the studio has become an important tool in the writing, so we’re embracing experimentation and the notion that everything is a work in a progress.

So rather than play a tune from start to finish, the aim is to build a bank of loops and variations of grooves using different snares, toms, and mic setups. While we have a good idea of what we’re chasing, it’s ultimately the element of surprise that gives us some unique samples that we can proudly call our own. Then we can go to town on screwing with them however we like.

Gear-wise, we’re using my Yamaha Maple Custom Absolute (22″, 12″, 16″ 18″) and constantly interchanging about fifteen snares (my beloved PHX is gathering dust back in Australia). Two of the most passionate drum folk you’ll ever meet are Greg and Darryl from Yamaha US, who have been a big help in explaining their range of shells. Sabian’s HHX line of Legacy and Evolution cymbals is up there: 18″ and 20″ crashes, a 22″ heavy ride, and a 20″ Ozone for some great trash.

I’m first and foremost an avid music listener. I’d like to think I selflessly put the song and band over displaying my chops, but I’ll admit that I can always do with more fundamental practice.

Some of my favorite artists are the New Pornographers, Ladytron, Every Time I Die, Dub Trio, Muse, and just about everything that spans classic rock. Though I’d be lying if I said Katy Perry didn’t creep in once in a while. I listen to everything. You should also jam with as many different people as possible, as I know that’s how I developed a bit of a pocket.

Birds of Tokyo’s album March Fires, featuring the single “Lanterns,” is out now. Check it out below.