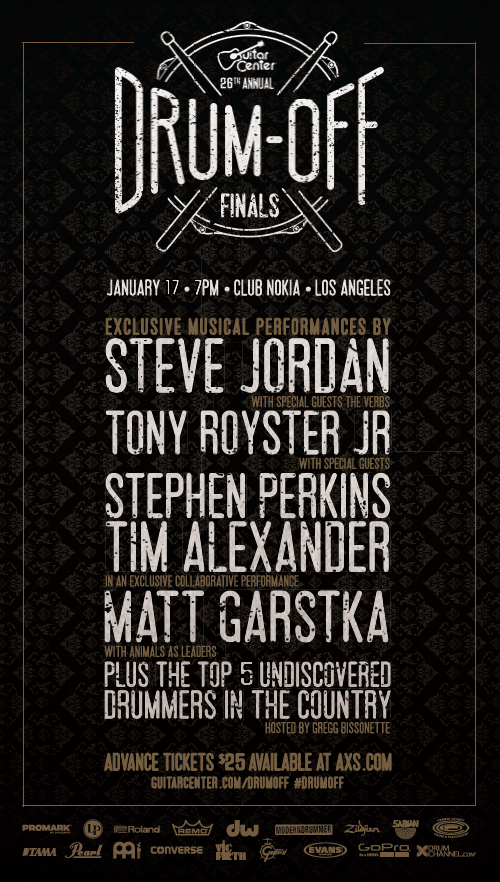 Five talented drummers from across the country have been chosen from over 5,000 drummers entered in more than 1,000 local competitions nationwide to compete as finalists in Guitar Center’s 26th Annual Drum-Off, the world’s premier drum competition. A proven platform for success, celebrated and embraced by the drumming community, past winners have gone on to play for the likes of Prince, Beyoncé, Jay Z, the Mars Volta, and more. At stake is a prize package valued at over $45,000 including cash, gear, and endorsement deals.

The night will be hosted by Gregg Bissonette (Ringo Starr, David Lee Roth Band, Santana), and will feature exclusive musical performances by a host of renowned drummers and a special ceremony honoring Steve Jordan’s legendary career with an induction into Guitar Center’s RockWalk. All five finalists will perform live to compete for the winning title in front of a panel of celebrity judges and an audience full of fans and industry professionals. Between the host, performers, judges, and RockWalk inductees the event is one of drumming’s most celebrated events and brings together masters of the craft.

Advance tickets are available for $25 and can be purchased here: http://bit.ly/1zvlXXN.

More information can be found at guitarcenter.com/drumoff.