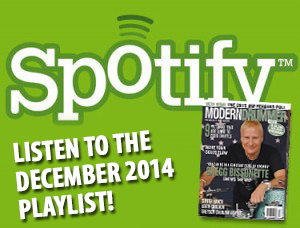 Want to hear music from the artists featured in the latest issue of Modern Drummer? We’ve got you covered. Our December 2014 Spotify Playlist kicks off with legendary D.C. go-go band E.U.’s hit “Da Butt,” which is referenced in this month’s Basics column. We keep it greasy with Wayne Krantz’s “It’s No Fun Not to Like Pop,” featuring Keith Carlock, who we catch up with elsewhere in the issue. After that we feature some classic bop from the late, great Frankie Dunlop, remembered in this month’s In Memoriam, as well as a few tracks highlighting the versatility of cover star Gregg Bissonette. See what else we have on tap for you right here.