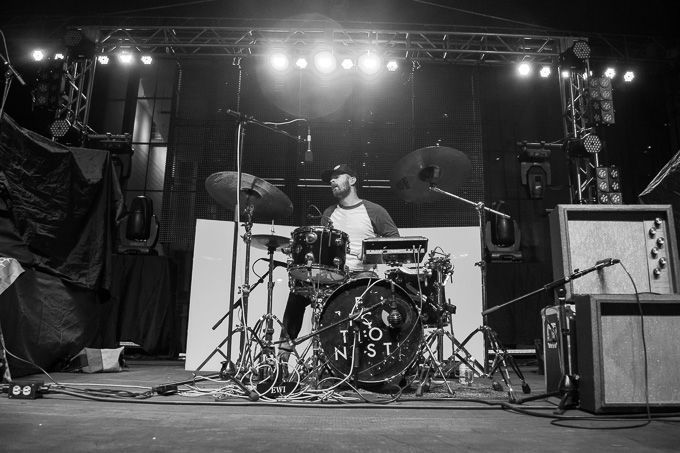 All my life I’ve been told I play the drums wrong. After nearly every show, people come up to me to ask why I play the way I do. So let me take a second to describe why my setup is so intriguing to people and what makes me sound different than your average drummer.

The short story is that I’m a left-handed drummer who plays open-handed with my right hand playing the hi-hat and ride and my left foot playing the kick. Just picture a left-handed kit with the ride on the right side. I started playing this way twenty years ago, when I got a kick drum for Christmas in 1994. This kick came after getting a snare the previous year. Being left-handed and never having had any lessons, I naturally played the kick with my left foot. I played my two-piece kick and snare kit for about a year until I added a hi-hat, which I got for Christmas in 1995. Since my left foot was already playing the kick, I put the hi-hat to the right and played it with my right foot. It never felt natural for me to cross my arms to play, so I started using my right hand to play the hi-hat.

Since I never had drum lessons, I simply listened to my favorite songs to figure out which drum did what. After noticing that rides usually had similar patterns to hi-hat patterns, I set up a ride (when I finally got one) on my right side so my right hand could play it. So, really, the way I play today is a result of the instincts I had as a ten-year-old self-taught kid!

When I’m not playing in my band, Fictionist, I enjoy running a small drum studio. Because of my unique journey in learning to play the drums, I give my students a lot of room to explore what setup feels instinctual and natural to them. While I do give them guidelines and tips to make playing easier, I firmly believe that music will always be a better and truer form of self-expression when coming from an instinctual place. Whether playing in the studio or in my band, I always try to play what comes naturally to me first. Nine times out of ten, that first take is what we use for the song.

Being a left-handed drummer in a right-handed world can be difficult, but I’m so glad I didn’t listen to the teachers who told me “it would be a lot easier if you just learn how to play right-handed.” It was through playing the way that felt natural to me that I found my voice as a drummer and is what gave me my unique edge. Because I play the snare with my strong hand and don’t cross my hands I can create a strong back beat while leading with my strong hand for fills. This sound is evident in our new self-titled album. If you listen closely to track eight, “Give It Up,” for example, you can hear that I’m playing open-handed because some of the beats I play are only possible if you uncross your hands.

As a drummer, I believe my role in my band is to first lay a foundation and then to act as the nails that hold the framework of the song together—making sure every instrument is locked into place. In large part, I also control the dynamics of a song and the overall feel of the group. While I get the job done in a more untraditional way, I believe the most important takeaway is to do what comes natural to you because that is usually the point where you are making a connection with the listener.