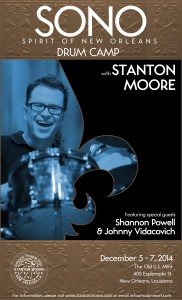 Grammy award–winning drummer Stanton Moore (Galactic) has announced that his second-annual “Spirit of New Orleans” drum camp will take place December 5–7 at the historic Old US Mint in New Orleans’ legendary French Quarter. Produced by MUSO Entertainment, this three-day camp celebrates the legacy and rich musical tradition that is unique to New Orleans. From Mardi Gras Indian to the evolution of jazz and funk, students will enjoy three days of hands-on drumming, live performances, a private tour of the Old US Mint’s “New Orleans Jazz” exhibit, and much more. Sign up by October 23 to receive a special early-bird discount at www.muso-mart.com.

All SONO camp packages include discounted admission to evening performances, including Anders Osborne with special guest Stanton Moore at Tipitinas’s on Friday, December 5, the Stanton Moore Piano Trio, Saturday, December 6 at Café Istanbul, and a Sunday, December 7 SONO/NOLA 2014 finale concert at the Old US Mint with special guests to be announced. Students will also be able to play and participate in a second-line procession on the grounds of the Old US Mint.

Located at 400 Esplanade Ave, the Old US Mint is the only building in America to have served as a United States and a Confederate Mint. Guests of Stanton Moore’s “Spirit of New Orleans” (SONO) drum camp will be given an exclusive tour of this historic building’s “New Orleans Jazz” exhibit featuring sheet music and instruments including Louis Armstrong’s first coronet and items from New Orleans’ jazz drumming legend Baby Dodds among other music memorabilia chronicling the history of jazz from its humble beginnings on the streets of New Orleans. The new photography gallery portrays a new generation of New Orleans performers.

A lifelong resident of New Orleans, Stanton Moore is a highly respected drummer and authority on New Orleans’ musical history who has toured the world as a performer and educator, garnering accolades for his superb drumming skills, clinics, and for his wildly popular Groove Alchemy book and DVD. In addition, Moore has released a number of educational products celebrating New Orleans drumming styles, including the book Take it to the Street, as well as the DVDs A Modern Approach to New Orleans Drumming and A Traditional Approach to New Orleans Drumming, as well as the comprehensive beginner-to-advance book and DVD project A Fresh Approach to the Drum Set. Moore is also the co-owner of Crescent cymbals and regularly performs with Galactic as well as the Stanton Moore Trio and Dragon Smoke (featuring Ivan Neville), Leo Nocentelli (the Meters), the Preservation Hall Jazz Band, Anders Osborne, and many others.