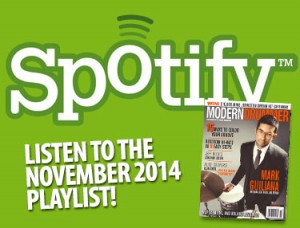 Our November 2014 Spotify Playlist features a typically diverse selection of tracks. This month we take particularly good care of all of you R&B and heavy-rock fans.

We start things off “Bodyguard,” the opening track from soul legend Betty Wright’s new album, Living Love Lies, which features Jeff Beck drummer Jonathan Joseph laying down a sweet slow-burner. Dig deeper into the playlist and you’ll come across a selection of classic half-time shuffles mentioned in Zoro’s In the Pocket column on the subject.

Of course, as usual, there’s plenty of jazz. Cover star Mark Guiliana is can be heard on several cuts, including one each from his two brand-new solo albums. Critiques of new CDs by drummer/leaders Brian Blade and Ralph Peterson are represented. And where would we be without a little Buddy Rich—well, more than a little; dig this eight-plus-minute solo recorded in Germany in 1977, which we plucked from the new release The Solos.

This month’s playlist is notable for featuring a number of other long tracks, including some of the most intense and complex hard rock cuts of recent times by genre leaders Periphery and Animals as Leaders, among others. See what else we have on tap for you right here. And see what’s in the November issue of Modern Drummer here.