Drummer Bill Stevenson is among the most influential musicians associated with West Coast punk rock, on any instrument. After making his name with seminal hard-core band Black Flag in the ’80s, Stevenson proceeded to set a standard for punk drumming with the Descendants and All, later spreading his reputation even further as producer and engineer with countless other groups. Modern Drummer’s October issue includes an Influences feature detailing Stevenson’s career highlights; here we speak directly with the iconic figure.

MD: Did you ever have formal drum lessons?

Bill: I never did. I learned by listening and trying things. I learned in the most geek-ish way possible, I suppose. I’d play along with records that I liked until I got opportunities to play with real humans, the real humans being Descendents and Black Flag.

When I was little I would actually go so far as to get out the pots and pans and Tupperware and spatulas and put together some sort of drum scenario on the kitchen floor. And then I was always tapping, playing drums on my notebook, with the pencil eraser being the drumstick tip. At a certain point somebody got wise and bought me a snare drum, and I played that until you can’t play a snare drum anymore. And then I got a drumset.

As I got into drums and started playing more, I found myself favoring certain drummers for certain things, like Bill Ward. He was probably the first drummer that I really fixated on. Then I favored Robo from Black Flag, Don Bolles from the Germs, Jack Reynolds from the Last, and John McCarthy from the Alley Cats. As time went on, all of a sudden it’s Billy Cobham that I’m listening to, because the Mahavishnu Orchestra was doing stuff that was pretty impressive. And then maybe eventually you find your way to Elvin Jones and Tony Williams, and you’re like “Whoa, I’ve gotta learn how to play better!”

MD: It’s funny how some of us found that music by working backwards.

Bill: Yeah, my dad tried to get me into jazz when I was really young, but he was playing me West Coast jazz. If he had played me Charlie Parker, it would have been a different life for me. 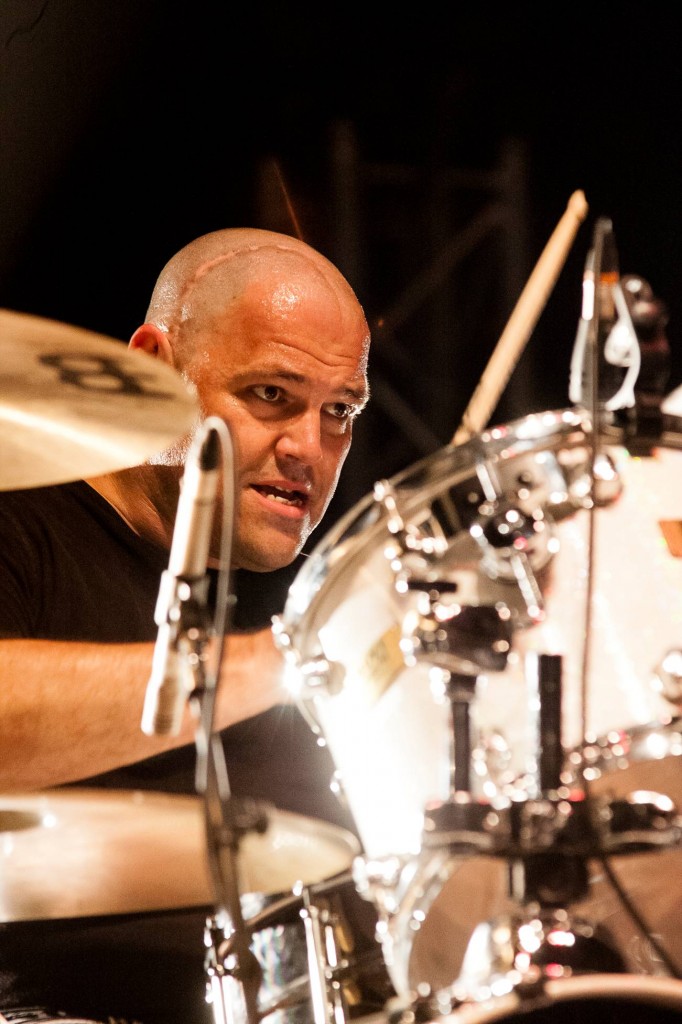 Bill: This idea of economy of motion, it wasn’t always the case. I think when I was younger I had some interest in showing off with the big, flailing arm movements, because I thought I’d get more girls that way. I’ve learned I can be more accurate when I’m not wasting any movement, though.

A lot of these things I think I learned as a producer and engineer. I also learned that you can get a proper tone out of a drum with less arm-flailing; so precision with timing and with where and how you’re hitting the drum itself [is important]. People who flail around a lot, their cymbals get so loud in the room mics that the takes become less usable. I guess I’ve developed a very recordable sound—like, if you put me in a room, it sounds pretty good, as opposed to with some drummers, where you have to literally create the drum sound because they’re not playing with reasonable, relative volumes.

So it’s just things I’ve observed along the way. Sometimes in life we learn more about what not to do than what to do, and from recording hundreds of drummers, sometimes I walk away and think, “Oh, that thing that he’s doing, I do it sometimes too—and it’s wrecking it!”

MD: You seem loose and relaxed when you play; do you have a warm-up routine?

Bill: As far as a warm-up in a paradiddle sense, no. But in a yoga sense of the word, I do stretching before I play, but I really stretch after I play. I feel like every motion you have when you drum, if you can find a stretch that is contra to that motion, you can undo the stress that comes from that motion. To do a stretch that’s contra to gripping the stick, I just force my hands open, leave them open, and then I count to ten and breathe. I do that three times. That stretches the muscle that runs from your thumb down to your hand. And then I push my fingers backwards. I’ll do similar stretches with my feet and stuff. And that’s all the warm-up and cool-down I do.

MD: You were around at the beginning of at least one musical development. If I get a drum student today, I’ve got over thirty years of punk rock history to point to. As punk rock was still very young when you started, what were you drawing from?

Bill: Well, there was stuff that to me really carried a lot of the spirit of what would become punk rock, like the Kinks, the Seeds, the Troggs, even some of the early Beatles stuff. Those would be some of the obvious ones, and then happening in another dimension would be the Stooges. I’m young enough to where the Ramones were an influence, because they were playing a little faster than the Rolling Stones, Sabbath, and Kiss. All those bands have a commonality in their guitar riffing—though I never categorized rock and punk rock separately. I’ve always been very focused on a great song—every detail, from the standpoint of each and every instrument and the vocals.

MD: It sounds like you had a producer’s mindset from early on.

Bill: Even when I was a kid, I would pick things apart, and I always had that interest in analyzing and dissecting music. Something comes on the radio, and I can’t talk to you anymore because I immediately go into this analytical mode and try to deconstruct the song.

MD: You’ve recently revisited the Black Flag material with Flag [featuring past Black Flag members Keith Morris on vocals, Dez Cadena on guitar, and Chuck Dukowski on bass and Descendents guitarist Stephen Egerton]. How is your approach different from how you play in All or the Descendents?

Bill: When I [originally] drummed for Black Flag, the band was kind of going through growing pains. The music was getting slower and more metal-sounding, which I didn’t like, but it was also getting experimental and improvisational, which I liked very much. Even though I don’t know if I was necessarily up for the task at that young age, I was up for trying to be up for the task. So we did some records that had to be made so that we could keep growing as a band, so that we didn’t just make Damaged 2.4 or 2.5 or whatever. But the Black Flag that I love was Robo, Chuck, [founder/guitarist] Greg Ginn, and each and every one of the singers. That’s the Black Flag that I like. The stuff I recorded with Black Flag…I’m not really fond of a lot of it.

MD: You were on 1985’s The Process of Weeding Out. I’ve always thought that was kind of an odd duck in several ways, but brilliant. What was it like learning that music?

Bill: Well, we didn’t really learn it. The songs are all just one or two central riffs. It’s like Mahavishnu’s “Birds of Fire” in some ways, or bebop. But we’d just play and try to improvise and feed off of each other. You can hear that there’s some structure, but there was a lot of room for anti-structure too. That record could’ve been a high point in Black Flag’s thing, but it was mixed so terribly. Some of us, more than others in the band, fell into some of the trappings of ’80s production. To me that also rears its evil head on Loose Nut and In My Head, and on I Don’t Want to Grow Up by the Descendents.

MD: It would be interesting to hear you guys revisit the more improvisational stuff, with hindsight.

Bill: I do think that my attempts at improvising or doing music that has a more open canvas in recent years were more fruitful [due to playing that music].

MD: Making the transition from drummer to producer to engineer—how’d that come about?

Bill: Some of those things we were talking about, some of those “failures” from a recording standpoint, really prompted me to try to learn more about how to engineer so that I could prevent my own records from sounding crummy. I like the idea of trying to implement a positive influence on a recording, to make a band sound better than they did when they walked in the building, or to help with their arrangements. I was content recording my own records, but people started coming to me and saying, “Hey, will you record our band”? And I was like, “Yeah, I like your band,” and it kind of evolved. Even having built the Blasting Room so that we could record our band, it took on a life of its own, and bands started calling. I’m proud of that in the sense that it was a very organic evolution. It wasn’t something where we got some investor to give us two million dollars and built the studio, it just grew very naturally.

MD: A few years ago you suffered from a pulmonary embolism and the resulting complications. How out of the woods are you at this point?

Bill: I’m so majorly out of the woods that it’s miraculous. The way that I really cut it off was something pretty similar to a Paleo diet. I was eating chicken and broccoli every day. And I got rid of it. I just think I was lucky because I didn’t work really hard at it; they took the brain tumor out and, boom, I lost a hundred fifty pounds. It’s not like I was Rocky running up the bleachers and stuff, but I think I was impaired by that tumor so greatly that it caused all these health problems. Once the tumor was gone, a lot of the health problems resolved themselves.