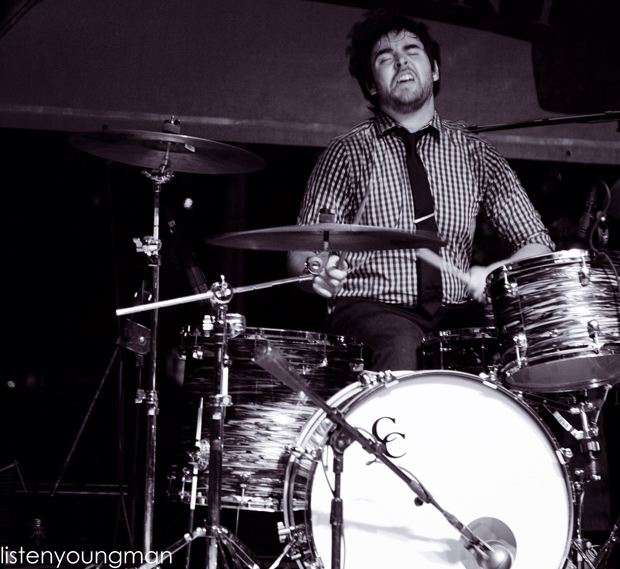 Hey, Modern Drummer readers! My name is Nick Zamora. I play drums for the Suffers, a Gulf Coast soul band from Houston, TX.

This past spring, I had a crazy week in Austin, TX. This was the Suffers’ first invitation to South by Southwest (SXSW), Austin’s annual music/film/interactive festival. For our first effort, we packed seven performances into just four days. Highlights included playing for Russell Simmons and Steve Rifkind at the ADD52 showcase, blazing through a three-song set for a rabid crowd at a BLKYN1834 party (the groups before us ran long so we had to get in and get out), and an amazing night on Saturday at the Convoy Group/Clean Bill Management Official Showcase, playing alongside some of our favorite Texas bands. The opportunity to perform so many times for so many people that had never heard us was really rewarding. We received great feedback and lots of love, which is the stuff on which we thrive.

Performing with the Suffers for the last couple of years has been an experience. The process of writing, recording, and playing live is really a pleasure because of the (nine!) other talented musicians in the band. Though the “throne” is mine, there are actually three other drummers in the band—Chapy Luna, our hand percussionist, Pat Kelly on keys, and my brother, Alex Zamora, on guitar. Alex grew up playing on my kit when we were young and just sort of picked it up and Pat and Chapy both actually make their livings as drummers. Bassist Adam Castaneda’s playing and timing are so solid you could really include him, as well. I consider myself lucky to share the stage with these multi-talented musicians and just having them around helps me stay focused on improving my drumming constantly. In addition, having such rhythmically inclined band mates actually makes my job a lot easier. We develop this pocket together and, even without making much eye contact, everyone just locks in which is so crucial in a ten-piece band. The result is the huge, immovable groove that serves as the foundation for our slamming horns and our very talented vocalist.

We completed tracking for our first full-length album, a follow up to a self-produced and self-recorded debut single released last year. The last songs were recorded 100% live at Church House Studios in Austin two months ago. It was daunting to consider tracking that way as it allowed for very little corrective overdubs/punches, if any, but we quickly found that the method benefitted the feel of our songs in a way that easily outweighed any downside. If we couldn’t live with something in a take, we just played it again. We found, however, that we preferred early takes, sometimes first takes, even with a little hiccup here or there. Even live main vocal takes were kept in favor of overdubbing. I attribute our success recording live to this same “mega-pocket” my talented band mates and I create on stage.

I’ve been a Modern Drummer reader for more than twenty years and know it’s all about drummers learning from drummers. If one were to ask me for advice on improving their drumming, my best offer is to surround yourself with incredible musicians and make the music you love. The result will elevate you and your playing in incredible ways.