The train beat is a must-have in your bag of tricks. While it’s most commonly used in country and bluegrass settings, with very little digging you can find examples of it in a multitude of genres, from rock to pop to metal.

While all of these patterns can be played with sticks, I think you’ll enjoy experimenting with some additional implements, like brushes and rods. The trickiest aspect of the basic train beat is the fact that the backbeat, which we are normally accustomed to playing with the left hand, is played by the right hand (or vice versa if you’re a lefty).

For all of these patterns, make sure to play the accents strong while keeping the inner beats relatively low. In the notation included in the May 2014 issue of Modern Drummer, I’m using an X on the snare to represent an accent. This can be played as an accent in the middle of the drum, but my recommendation is to play it as a rimshot.

For more on train beats, check out the complete article in the May 2014 issue of Modern Drummer magazine.

On the Beat With Jake Bundrick of Mayday Parade: Make It Your Own

An Interview with Brian Reitzell 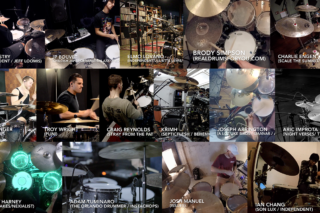