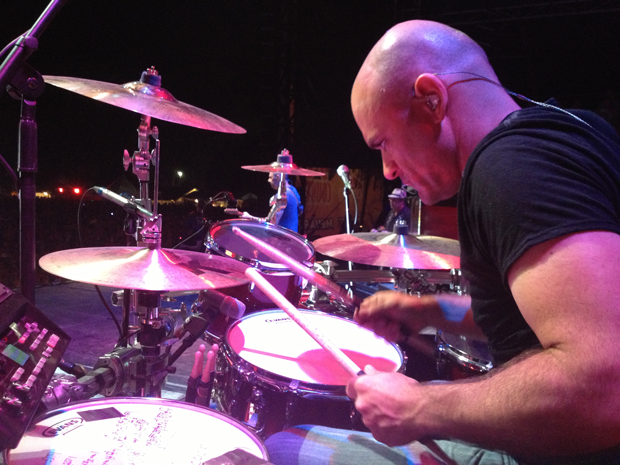 Hello fellow drummers, music lovers, and MD readers! My name is Johnny Richardson and I live in Nashville, Tennessee and am beginning my third year as superstar country artist Trace Adkins’ drummer.

My start to the job with Trace was the classic “ready, set, go” scenario that we have all read about in the pages of MD over the years. I got “the call” on a Friday evening (as I was heading out for a weekend of shows). Rehearsals were set to begin on the next Wednesday for three days, take a couple days off, then another three days of production rehearsals in a local performing arts theatre, and finally jump on the bus the last night of rehearsals to begin a theatre tour. I had the live show to learn (ninety minutes of live and very arranged versions of the hits, etc.), as well as a list of other songs that sometimes make the show, and the newest record. In addition, I needed to learn the computer/click system they already had in place and be able to run it. So, did I feel overwhelmed? Yep! Did I sleep much for the next couple weeks? Nope!

But ya know what? I learned something. We are all more prepared for this type of moment than we realize. We all spend countless hours practicing, working, preparing, gigging, listening to music, charting songs, and playing with our buddies, working with DVDs and books, and watching YouTube. We are constantly improving ourselves and preparing ourselves for whatever comes our way. We don’t set out to do it for money, recognition, or accolades, we do it because we absolutely love it, and that is exactly what leads to success and happiness—whether it’s with drumming or anything else. So when moments like this happen, no fear, you jump in 110% and go for it.

Being Trace’s drummer has been a blessing in many ways. In two years I’ve had many incredible experiences. I’ve played with some of my heroes, been to some beautiful places, and made many new friends. I consider the guys in the band my brothers. The musical experience has been challenging and rewarding and the live show is the furthest thing from a simple country and western show. I get to drive songs with R&B, blues, traditional country, new country, Americana, and R&R elements, and we knock em’ out—bam. It’s a blast!

In December of 2013, Trace released his first Christmas record, The Kings Gift. I’m very proud to have played percussion on the record. In addition, we did The Christmas Show tour for two months, which provided a whole new set of challenges and rewards. The entire record was done in a Celtic style. So, it was back to the shed to work it all out. I also reconfigured my rig to include a lot of percussion and we added musicians to the band (a four-piece string section, background singers, and bagpipes!), to authentically recreate the feel and sound of the record. What a ton of fun.

When I’m not working with Trace I get to spend some of my time playing with John Oates, when he’s not performing with Daryl Hall. John is constantly writing, recording, and performing his own solo material. Typically he performs in an acoustic fashion and I get to accompany him on percussion. I keep it simple with him—a cajon and some shakers and tambourine, just enough to give him the groove and support he wants but still allow the freedom to go wherever he wants.

Finally, I must mention that I have the support of really great manufacturers. I’m proud to be sponsored by and use Yamaha drums, Zildjian cymbals, Remo drumheads, Vic Firth drumsticks, and JH Audio in-ears.

Thanks for taking a minute to read a little bit about me. Please come say hello on Facebook or at a Trace or John show in your area, and keep on keepin’ it in the pocket!