Ahoy, MD readers! It’s been a little bit since my last blog, although I was fortunate enough to be featured in the “Up and Coming” section of the February 2014 issue. (My mind is still trying to wrap itself around that.) On our most recent tour of Europe, I had the idea to write about some of the things I carry with me.

After eight years of touring across three continents, ranging from my first few tiny DIY tours to big support ones and the many headlining ones in between, these are some things that, after much trial and error, I try to always have with me on the road. I’m omitting obvious things, like gear, iPod/MP3 players, headphones, clothes, etc, and am focusing on more esoteric things that you might not think of immediately. Being that some of them involve health/exercise/treatment, always check with a healthcare professional before engaging in the related activities.

Lacrosse Balls. I use these to massage knots out of my back, hamstring, gluts, and hip flexors. When I’m at home I use a foam roller, but that isn’t a great thing to lug around in the van, and it’s even less easy to carry for international touring. Lacrosse balls are cheap, you can usually find them at general sporting goods stores, and you can toss them in your backpack. I typically use one to loosen up before shows and sometimes afterwards. For my back and hip flexors (front side), I lean against a wall with the ball against the area I’m working on and roll the area out slowly. For the lower body, I do basically the same thing while sitting on the lacrosse ball on the ground or a chair. 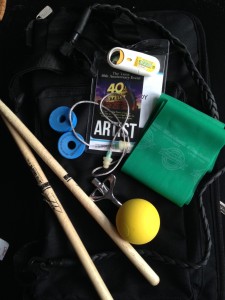 Portable clothesline. Drummers usually sweat a lot. Even if you play with a fan on you, there’s a good chance that by the end of the set your socks and underwear will be pretty swamp-like. So it’s very nice having a portable clothesline on the road. I use the rubber-braided kind that let you secure articles of clothing to them without needing clothespins. These are even more useful in Europe where it’s difficult to find Laundromats.

Cympads. These are essentially cellular foam replacements for the felts on cymbal stands and are offered in standard size (called Optimizers) as well as larger ones for volume control (called Moderators). I first used these at the Coach Road session we did on our first visit to the UK. The engineer A/B’ed the difference the Moderator models can make, and as soon as we got home from that trip, I purchased a full set. They give you a ton of versatility without having to change cymbals. As with many bands, the sizes of venues we play on a given tour can range from tiny coffee shops to 500-cap rooms with serious PA systems. The Moderators act similar to putting some tape on your cymbals to dampen the sound, however, they don’t alter the feel of cymbals nearly as much. Even the normal-sized ones are great for the times when you have to use backline hardware where the felts are typically blown out. (http://cympad.com)

Theraband (resistance band). I picked up some of these recently to strengthen one of my shoulders that has repetitive strain. They are resistance bands that you can use for a variety of exercises. Even if you don’t have a specific body part that is in need of physical therapy, they can be used for dynamic warmups before you play.

Antiseptic spray/bandages. Between the callouses that turn into blisters, the callouses that dry out and split open, or maybe a cut you might get from something sticking out of a doorway while you’re loading gear, it’s never a bad idea to have some antiseptic spray and a supply of bandages. I use a travel-size Neosporin spray and prefer the waterproof bandages, as they typically have a little bit of tackiness to maintain grip on your sticks. In my experience, cloth bandages get smoothed out too much after a song or two.

For more on John and Tero Melos, visit teramelos.net/information.

To read a previous Modern Drummer blog from John click here; and be sure to pick up the February 2014 issue of Modern Drummer magazine featuring John’s “Up & Coming” piece.