Check out this video of longtime Tom Petty drummer Steve Ferrone and the Roots’ Questlove playing “Pick Up the Pieces,” from Guitar Center’s 2014 Drum-Off Finals, which were held this past January 18. The song was the biggest hit for the Scottish funk group Average White Band, which Ferrone played with in the late ’70s and early ’80s.

Brian Kantor of the Fruit Bats on Absolute Loser 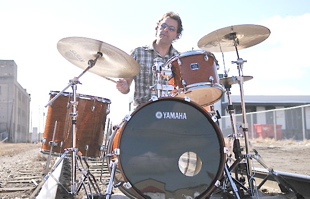