Back in the day—you know, like five years ago—you had to be doing world tours or making platinum records to in fluence as many drummers as this month’s cover star does with his groundbreaking educational website. -by Miguel Monroy 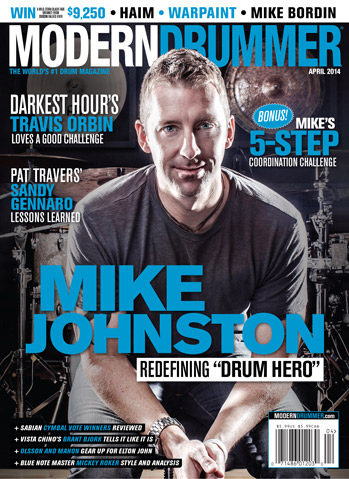 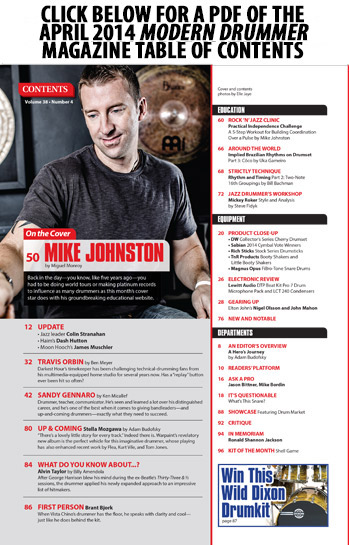 TRAVIS ORBIN
• Darkest Hour’s timekeeper has been challenging technical-drumming fans from his multimedia-equipped home studio for several years now. Has a “replay” button ever been hit so often? -by Ben Meyer

SANDY GENNARO
• Drummer, teacher, communicator. He’s seen and learned a lot over his distinguished career, and he’s one of the best when it comes to giving bandleaders—and up-and-coming drummers—exactly what they need to succeed. -by Ken Micallef

UP & COMING – Stella Mozgawa
• “There’s a lovely little story for every track.” Indeed there is. Warpaint’s revelatory new album is the perfect vehicle for this imaginative drummer, whose playing has also enhanced recent work by Flea, Kurt Vile, and Tom Jones. – by Adam Budofsky

WHAT DO YOU KNOW ABOUT…? Alvin Taylor
• After George Harrison blew his mind during the ex-Beatle’s Thirty-Three & 1/3 sessions, the drummer applied his newly expanded approach to an impressive list of hitmakers. -by Billy Amendola

FIRST PERSON Brant Bjork
• When Vista Chino’s drummer has the oor, he speaks with clarity and cool—just like he does behind the kit.

AROUND THE WORLD Implied Brazilian Rhythms on Drumset
• Part 3: Côco -by Uka Gameiro

AN EDITOR’S OVERVIEW
• A Hero’s Journey by Adam Budofsky

Kit of the Month – Shell Game