The World Vibes Congress was held at the Malletech factory in Neptune, NJ on January 4 and 5, 2014. By the time jazz legend Gary Burton took to the stage at the Dauphin Grille Saturday night, about sixty fellow vibraphonists had spent the day discussing ways to promote their instrument, further their craft, and improve their performance abilities. 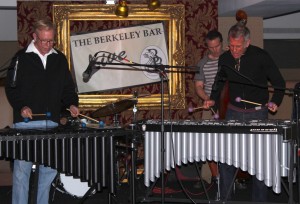 “It’s a beautiful thing,” mused Ed Smith, a performer who also teaches vibraphone and Balinese gamelan at the University of North Texas, “to show the joy of the vibraphone in so many different styles, to be among all these amazing vibe players.” Smith traveled from Texas to attend the second World Vibes Congress, a gathering of musicians whose mission is to promote the vibraphone and improvisation on all keyboard percussion instruments, including writing more music, getting more students to play, and working with teachers to develop the best methods for instruction. His enthusiasm for the project was echoed by many attendees, who braved New Jersey’s recent snowstorm to lend their support to an endeavor close to their hearts.

“I’m here to be a part of a community that exists but hasn’t been connected before now,” said Stefon Harris, a fellow jazz vibraphonist, composer, and educator. “There’s a strength in our numbers.” 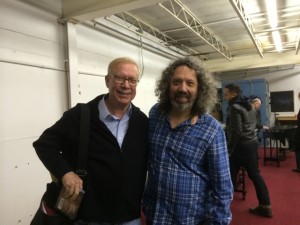 That “strength” falls right in line with the vision Tony Miceli had when he first conceived of the World Vibes Congress. “The goal is to see if everybody here wants to start an organization and then turn it over to them,” he explained. “It’s about raising the profile of the instrument, to make an organization that’s surrounded by all the great players, not run or overrun by companies.” Miceli himself has been a regular on the jazz vibraphone scene for the past three decades.

During Saturday’s events at the Malletech factory in Neptune, Congress participants engaged in workshop-type settings to confer on topics ranging from managing performance acoustics and tuning to the diverse array of instrument options available on the market and promotion through social media outlets. Interspersed among the scheduled discussions were freestyle jam opportunities for students and professionals alike. “It’s been a fantastic opportunity to meet with some of the great vibraphonists on the scene and to connect with the ‘switched-on’ up and coming players,” noted Joe Locke, a New York-based jazz vibraphonist, composer, and educator. 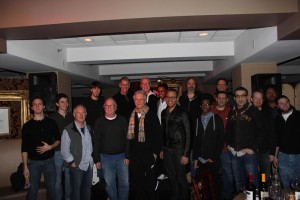 But the highlight of the day was clearly the evening’s Super Vibes Jam featuring some of the top names in today’s jazz vibraphone scene, including Burton, Harris, Locke, Miceli, Christos Rafalides, and Smith. For nearly four hours, they took to the stage, accompanied by bassist Mike Pope and Ludwig Afonso on drums, to share their talents with an appreciative audience. Locke and Harris took turns sharing the spotlight with Gary Burton for an extended and joyous first set. Later, interspersed among performances by several powerhouse professionals, Burton returned to the stage to introduce two students to the crowd.

“The fact that Gary (Burton), Joe (Locke) and Stefan (Harris) are here and playing together is a mind-blowing thing that I don’t think anybody could have anticipated even a short time ago,” added Leigh Howard Stevens, a classical marimba artist hailed by Time magazine as “the world’s greatest classical marimbist,” and owner of Malletech. “This is an incredible, historical moment. And I don’t think that’s overdramatizing it!”