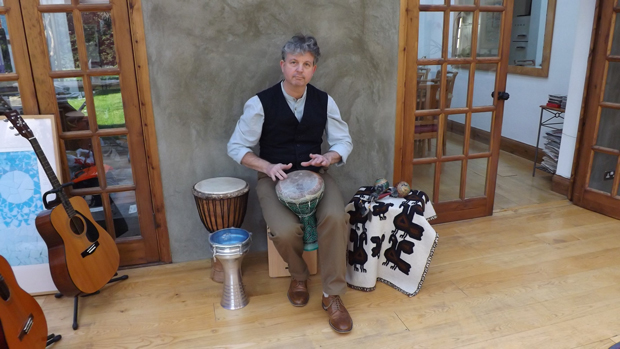 Since I joined DCD back in 1982, my drumming path has seen a lot of changes. The DCD opportunity took me by surprise, and I went from being a pub/club band drummer doing basic timekeeping to standards, to being a signed artist, writing and recording our first album and a BBC Radio session and heading off on an overseas tour within nine months. Despite the speed of this transition, we had no income at that point, and everything was being done on a shoestring budget.

Those early recordings and tours were done with my original Premier Olympic four-piece kit, which, for those who remember, was the classic student-level rig of its era (or here in the U.K. it was anyway). Nevertheless, with the help of some Remo and Evans heads and a lot of hard tuning, we got a good sound and a lot of mileage out of that old kit! In fact, as the first bits of money started to come in, Brendan Perry of DCD’s priority was to get one of the newly emerging keyboards with a built-in music computer and sampling facility (which were high cost in the early ’80s, relative to today), so it was a couple of years before we got around to upgrading the drums—and even then it was a piecemeal upgrade: first the bass, and a while later the toms from the Premier Elite range. We never did get around to replacing the snare, and I used my original Olympic 5×14 metal shell right through my time with DCD.

I stopped touring with DCD after 1990 due to family commitments, and the arrival of my daughters meant that a room in the house for a drumkit was no longer available. I started to build a collection of hand percussion (and other instruments), which could be more readily accommodated, and after a few years of my kit drums gathering dust in cupboards, I eventually sold them all, which was a bit heartrending but had to be done.

However, like most drummers, I could not bear to part with my principal cymbals and kept the Super Zyn 18″ medium ride and Paiste 2002 18″ bright crash, which I’d had since the mid ’70s. Over the years I’ve added Zildjian ZBT hi-hats, an assortment of Wuhan Chinas, and most recently a couple of amazing cymbals from the Turkish Bosphorus range—a 22″ Gold ride and a 16″ Antique crash. If you’ve yet to discover these cymbals, I recommend you check them out (and I’m getting NO endorsement kickback for that!).

On my new album, The Painted Caravan by the Peter Ulrich Collaboration (north American release 14 February 2014, AIS Records), I use the largest range of hand drums and percussion that I’ve ever incorporated into a single album, including most of my cymbal set. The drums include darabuka, djembe, bongos, tabla, talking drum, Mayan drum, Chinese wood drum, and various frame drums, so that, in combination with the other instrument selections, we’re giving a very distinct flavor to each of the twelve tracks.

I love recording with this range of instruments and having an arsenal of sounds to pick from when we start on each new piece, but…after all these years of not sitting behind a kit, I find myself gradually succumbing to a growing desire to sort myself out with a practice room and the Sonor maple kit I’ve always dreamed of owning. When I get it, I’ll drop by this blog again and let you know how damn good it feels! Thanks for reading, and I hope you enjoy The Painted Caravan.