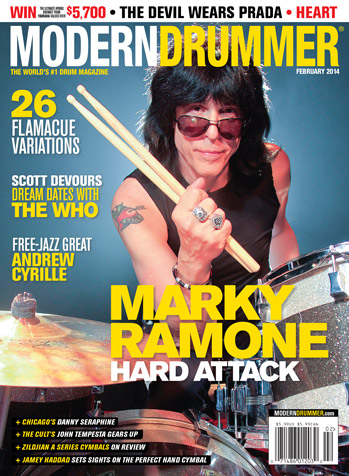 Portraits – Squidly Cole
He’s a link between old and new Jamaican sounds, touring with Jimmy Cliff as a teenager in the ’80s and riding the cutting edge of modern reggae hybrids today.

Andrew Cyrille – Shattering conventions and redefining rhythms in the now.

Classical Roots – Part 5: Steve Reich
The in fluential composer has opened pathways to rhythmic creativity that simply didn’t exist before.

Up & Coming – John Clardy
The drummer felt he’d hit a ceiling—until he hooked up with the art-rock band Tera Melos.

What Do You Know About…? – Melvin Davis
“I was a very adventurous person—I would try everything.” And today the Detroit soul legend’s experiments are finding a whole new audience.

First Person – Scott Devours
What happens when an opportunity to play with the Who drops in your lap? You grab that bull by the horns, that’s what!

Gearing Up
• The Cult’s John Tempesta

Kit of the Month – Gift Rapping