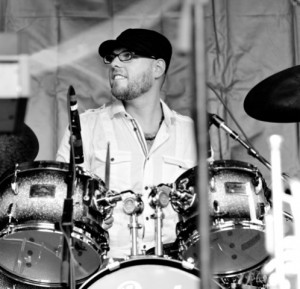 Hello, Modern Drummer readers! It’s my pleasure to be back with you on this blog. Since I wrote you three years ago, I’ve had some incredible musical experiences, including a performance for President Obama in my hometown of Washington, DC, and a busy touring and recording schedule with many amazing artists, including the post-punk/electronic outfit, I’m in You. The band’s third full-length album, Trust, came out November 4.

I’m in You formed in 2007, and I started playing with them a few years later though my connection with bassist Dmitry Ishenko, whom I’ve worked with for many years in different projects, including a trio called the Smoke People, which plays every Monday night at the Ella Lounge in NYC.

I’d like to share my thoughts on one aspect of the recording process with I’m in You that I found to be a unique musical challenge—mixing my live drum parts with a programmed drum machine to create a wall of percussive sound to drive the tune forward. One reviewer described the new album as “apocalyptic disco.” That’s a pretty apt description. It’s gritty and harmonically unpredictable, but the grooves are heavy and repetitive, with a lot of four-on-the-floor and tight 16th-note hi-hat patterns that are ripe for motivic development.

Songwriters Dmitry Ishenko and Sebastian Ischer did most of the initial drum programming with a BOSS DR-770 (old-school!) that was just a rehearsal tool at first. They liked the sound so much that we ended up using it on the record, despite issues with the MIDI time clock drifting unpredictably (we’ve since shifted to a Machinedrum SPS-1 that has no issues with drift). After a little Pro-Tools finagling, I was able to start crafting my parts around it.

While it is important for all drummers to practice with a metronome and have solid time, taking the next step is even harder—making intricate parts really feel good when you are playing with an inanimate object that doesn’t respond to you as a live musician would (well, as most live musicians would). This concept forced me to think compositionally and consider certain musical choices. Was my hi-hat part blending rhythmically and sonically with the programmed beats? Was my snare tone right? Was a busier, more linear approach required, or would simplicity be more appropriate? (Answer: simplicity!)

In some cases, I focused on playing with the drum machine part. In others, I would play against it. For example, the track “Sure” has a programmed kick drum and hi-hat pattern that I am essentially doubling, an approach that reinforces and thickens the texture.

On the track “Fates Worse than Death” (a favorite of mine), I take the opposite approach. The programmed track consists of a lot of shakers and high-end sounds; my part is more linear and focused primarily on the snare and toms. One thing I like about I’m in You’s approach to rhythm is that we really go out of our way to make changes in each section that match the intensity, dynamics, and direction of the tune. You can hear these examples on soundcloud.com/iminyou.

In addition to working with I’m in You, I’m looking forward to a busy year of shows and studio sessions in New York and beyond, which you can read about on my website, robmitzner.com. As for the future of I’m in You, we’ll be working on some industrial- and electronic-influenced dance music and will focus heavily on producing and recording, while also promoting the new album.

Thank you for the opportunity to share my experience with you!

For more on Rob Mitzner and I’m In You, go to iminyou.com, and www.robmitzner.com, and facebook.com/robmitzner.