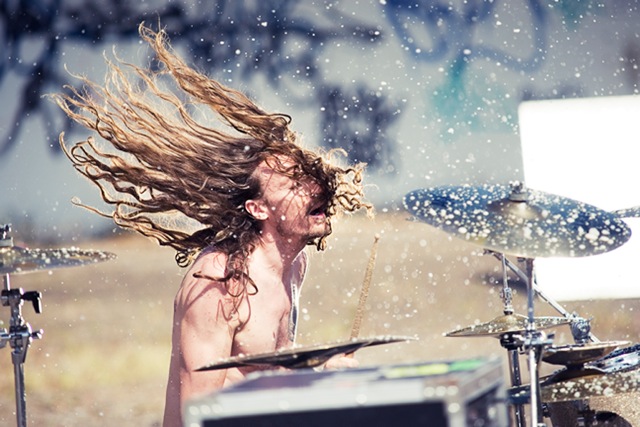 Hey guys! Luke here from Dead Letter Circus. We’ve covered a lot of ground now on this North American/ Canadian tour with Periphery, Born of Osiris, and Twelve Foot Ninja. I even tested out my French on the lovely people in Quebec and Montreal and failed miserably. Apparently Yoplait is not French for yogurt, and they don’t call chips “French fries.”

The crowds were amazing though, and the weather was some of the coldest us Australians have ever experienced. There were literally ice sheets on the sidewalk, and my hair froze after I walked down the street after a shower!

The drums have been holding up well. The cold hasn’t affected the heads or shells at all, even going from the hot club straight out into the alley ways for pack down. Warmups were essential, though, to make sure my hands and feet were working properly, and I didn’t suffer any injuries. This usually consists of a couple sets of pushups to get the blood pumping, some crunches to get the core engaged, and some rudiments.

I move through singles, doubles, paradiddles (all inversions), paradiddle-diddles, triple- and four-stroke rolls, and some flam variations. After these, I do some breathing exercises, which might sound a bit weird but when preparing for a show you have to be as relaxed as possible to be at your best. And the best way to get relaxed is with slow and steady breathing. It’s actually a two-fold bonus, where you get super relaxed and your body gets oxygenated, which is a plus when you’re expending so much energy behind the kit.

I’m not sure if you guys have ever felt that feeling in your extremities when there’s not enough oxygen getting to your hands and feet? It feels terrible. Your limbs stop working properly, and your brain starts to get foggy. Correct breathing before and during a show will limit this phenomenon.

Also, hydrating my body before a set is crucial to not cramping up or getting a super-dry throat from singing while playing. Drinking alcohol kind of leaves me feeling sluggish and a little clumsy when trying to pull off harder grooves and fills, which can really squash that “gig high” you get on a really good night. I prefer to be in the moment and enjoying the experience to the fullest. I don’t want alcohol ruining the euphoria of a great night behind the drums.

The band has been using the Mackie DL1608 for an in-ears rig on this run. It’s a super-lightweight sixteen-channel digital desk with onboard effects that sound rad. As far as drums go, I’ve been getting kick, snare, and stereo overhead along with all the guitars, vocals, bass, backing tracks, and click to my ears. This has been a great system, as we have limited changeover times and limited inputs. It really makes a massive difference having a nice clean mix in your ears when having to play to click. I gate and EQ the kick, with a spike around 5kHz, for nice attack. The snare has some compression, EQ, and reverb, and my stereo overheads pick up all the cymbals and toms. I usually run them through a compressor and an EQ with everything below 100Hz rolled off, and I add a slight reverb. This sounds pretty sweet in my ears and allows me to hear everything I’m playing really well when I blend it with everything else that’s happening on the stage. The whole band is hearing the click when we’re playing, and we’ve found this keeps the band a lot tighter overall. I recommend bands try this out, as we saw a vast improvement in our tightness once the global click came into play. Timekeeping is mainly the drummer’s job, but not exclusively.

I hope you can use some of these tips to improve your gig experience. Happy drumming!

For more on Luke Williams and Dead Letter Circus, go to deadlettercircus.com.