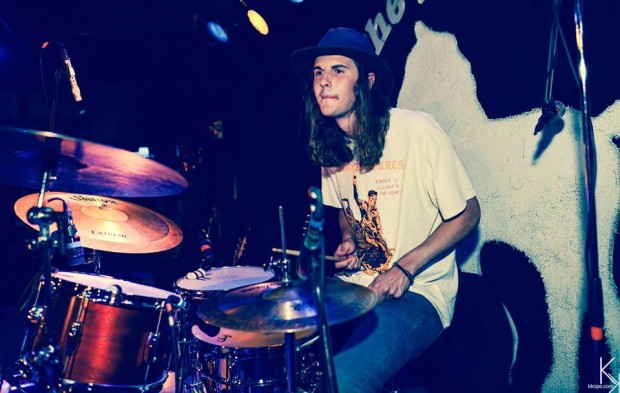 Hey! My name is Sam Gidley, and I am the drummer for the Nashville-based band the Lonely Biscuits. I am twenty-one years old, originally from Omaha, Nebraska, and am now living in Nashville.

I’ve been a constant foot tapper since I was born—rhythm was always there for me. I started playing piano when I was in the second grade, because three years of piano was required before someone could join the percussion section at my school. So I forced myself to do that. After the three years was up, I got a drumset for Christmas, and that’s when it all started.

I played in concert and jazz band throughout middle school and junior high, and I took drum lessons from Josh Austin until about the sixth grade. He concentrated on rudiments, technique, and reading music. That gave me a really good basis. Shortly after that, I started taking lessons from Matt Tobias. He taught me how to really dig into a groove, and concentrated a lot on feel, patterns, and solidity. Matt is a great drummer and producer now living in the Albuquerque area, and he is a huge influence on my drumming style. The balance between technique and feel is huge for me, and I try to stay as close to the middle as I can.

When I was eighteen, I moved to Nashville to study audio engineering at Belmont University, where I am currently a junior. My roommate and I started making music as soon as we moved into the dorms, and it eventually evolved into a band. The other two members lived on the same floor as us, and within a month of being at school the Lonely Biscuits formed. Since then, we’ve been traveling around the country playing at clubs, universities, and festivals.

I play C&C and a variety of other vintage drums, mostly from the sixties and seventies. My current set up is a 12×24 kick, 8×12 rack, 14×14 floor, and 6.5×14 chrome-over-brass snare. The guys at C&C build their own shells, which are incredible. They use less glue than the typical shell, so the drums really have a nice, warm sound.

The Lonely Biscuits have a new EP. We tracked everything live in our house, and it was a blast. There was no constraint, so I had time to try different setups and sounds for each song. The drums really have a live sound, which is exactly what I wanted—super roomy and fat. Be on the lookout for upcoming tour dates, and I hope to see you at a show!

For the Lonely Biscuits tour dates and more, visit thelonelybiscuits.com.