“I’m always aware of what the fans need and what the artist is trying to do. If I’m coming in, it’s time to go higher, time to upgrade.” Lady Gaga’s drummer doesn’t mince words—but why be shy when you’ve so clearly got the goods? 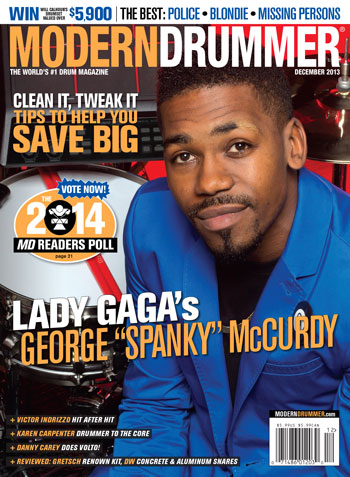 2014 MD Readers Poll It’s the only drummer poll that counts—own it.

Get the Bests Featuring the Police, Blondie, and Missing Persons

Rich Redmond on Stewart Copeland The Police drummer has had an in uence on an enormous variety of players. Jason Aldean’s slammer reveals a country connection.

Portraits Tammy Glover
The Sparks/Thorcraft Cobra drummer turns the old line “Don’t give up your day job” on its ear, balancing a corporate career with life in the fast lane.

Victor Indrizzo Major producers value his studio-guy head and band-guy heart. And that rare combo has helped Willie Nelson, Avril Lavigne, Rob Thomas, Shakira, Colbie Caillat, and scores of others make some of their best music.

First Person “You’re really good…for a girl.” Oh, the number of times a female drummer has suffered in silence—or not so quietly—through that kind of comment. DW’s Juels Thomas thinks it’s time we challenged ourselves to get past simpleminded gender thinking.

Up & Coming Juan “Carlito” Mendoza
The second time’s the charm for the 2012 Drum-O winner.

What Do You Know About…? Karen Carpenter
Maybe you were aware that the iconic soft-rock singer was also a drummer. But did you know just how good she was?

AN EDITOR’S OVERVIEW
For Every Digital, an Analog by Adam Budofsky

Kit of the Month Makes Your Heads Spin