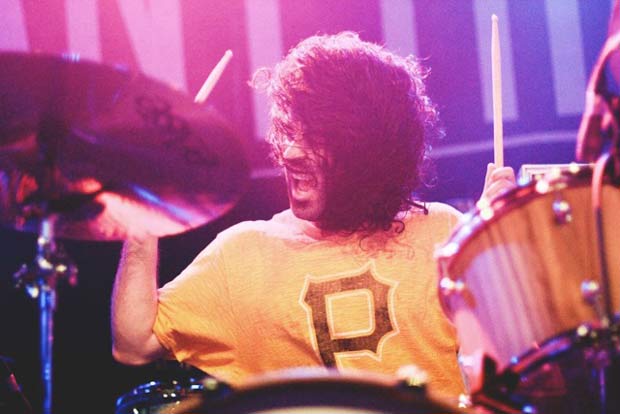 Hey, guys! My name is Blake Dahlinger, and I play drums in a band called I the Mighty. Huge thanks to Modern Drummer for having me. As a longtime reader of the publication, this is a pretty surreal experience!

I started drumming on things back when I was a little guy—like it goes for a lot of us, it started on pots and pans. But eventually, the spatulas were replaced with sticks and the pots with actual drums. I grew up in a small town in Wyoming (Rawlins), so there wasn’t much of a music scene per se. But a teacher my parents worked with played some drums, so I took lessons from him for a few years in elementary school. When I was in middle school and high school, my parents started driving me to Laramie, Wyoming (about a hundred miles from my hometown), to take lessons from the percussion instructor at the University of Wyoming.

After college, I moved out to San Francisco to pursue music full-time. After a few years there, I met my bandmates Brent, Ian, and Chris, and I the Mighty became my complete focus. We’ve been a band for about four and a half years, and just recently put out our debut full-length record, Satori, on Equal Vision Records.

The recording process for the record was pretty intense. I had a white board in our practice space documenting each section of every song and would film myself playing every drum part for the record once it was solidified to make sure every last ghost note was accounted for when it came time to record. We had a two-month time frame to write, so it was really nice that we weren’t too rushed and could be as prepared as possible going into the studio. I had actually ordered a new drumkit from a company called Masters of Maple prior to recording, and I got the kit a few days before we started tracking the record. So it was perfect timing! Sahir Hanif, who runs Masters of Maple, was actually our drum tech for the record, which was really cool. He got the drums all tuned up and brought in about fifteen snares for us to choose from for the different songs on the record. He also brought in his entire cymbal collection, so I had about forty cymbals to choose from. I was a kid in a candy store, for sure—ha ha 🙂

I really love all kinds of music, but some of my favorite bands are Thrice, the Used, Saosin, Armor for Sleep, Underoath, Senses Fail, Stone Temple Pilots, and Incubus. I love when music grabs you as a listener and makes you really FEEL the song. Drums are such a key part in doing that for me, which is one of the main reasons I love playing so much.

I feel so incredibly fortunate to have been afforded the opportunities I’ve had playing music. It’s truly been a dream come true for me. Immense thanks to anyone that has taken the time to check out I the Mighty—we appreciate it so much!

For more on Blake Dahlinger and I the Mighty, go to facebook.com or ithemighty.com.  Photo by Tarina Doolittle.