The “new” guy? Not so much. In fact, Korn has enjoyed the talents of this supremely hard-working shredster for six years now, and before that, David Lee Roth tapped his talents for eight. One thing’s for sure: Luzier’s passion behind the drums is as intense today as it’s ever been. 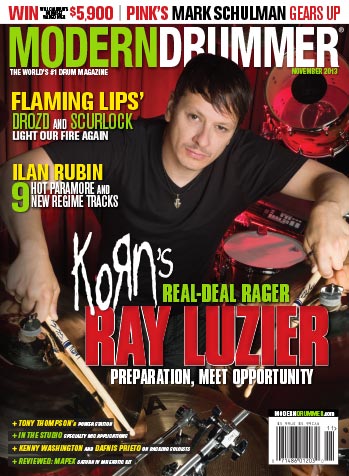 Woodshed – Dylan Wissing
At his own Triple Colossal Studios, this New Jersey–based drummer has cranked out tracks for top R&B and pop stars, including Alicia Keys, Drake, and Kanye West. Here, we get a tour of his space and walk through a typical recording session.

Encore – The Power Station
An unlikely 1985 alliance between a veteran rock crooner, an iconic new-wave band, and an R&B drummer par excellence resulted in one of the heaviest, funkiest albums of the decade.

Steven Drozd and Kliph Scurlock
The Flaming Lips have always gone about things a bit differently from everyone else. This month, the group’s dynamic drumming duo shed light on the making of their latest artistic triumph, The Terror.

92 What Do You Know About…? Frank De Vito
“The late ’50s into the ’60s was a golden era—I wasn’t ‘number one,’ but I worked a lot.” The combination of realism and work ethic that the L.A. studio vet convey s with that statement is just the type of attitude that has kept him employed for more than half a century.

AN EDITOR’S OVERVIEW
Live the Dream! by Billy Amendola

Kit of the Month A Journey to Remember