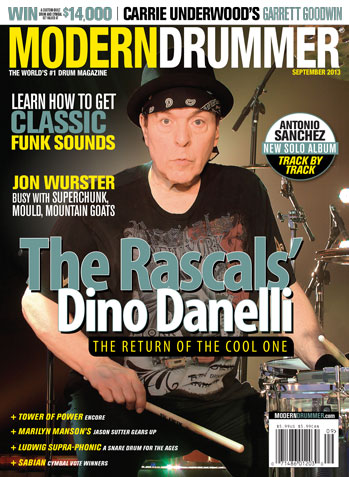 Encore Tower of Power: In the Slot
So precise, so grooving, so in fluential. David Garibaldi and company’s powerful sixth album is always ripe for analysis.

Antonio Sanchez
The Pat Metheny/Gary Burton drummer has released the first album completely made up of his own compositions. Here he details the remarkable kit work found on each track.

Jon Wurster
The loyal Superchunk band member has also been a significant contributor of late to the music of Bob Mould and Mountain Goats. Meanwhile, his sharp comedic work gets props from all corners, including the Twitter followers at Rolling Stone.

Up & Coming – Carrie Underwood’s Garrett Goodwin
Nothing about the 2013 MD Readers Poll Up & Coming winner is predictable—including his route to success.

What Do You Know About…? Big Country’s Mark Brzezicki
From working in a rhythm section for hire to scaling the top of the charts to backing the biggest names in rock, he’s experienced all the highs—and also some of the lows— that a thirty-year career in pop music brings.

Rock ’n’ Jazz Clinic
The Odds Are in Your Favor Three-, Five-, and Seven-Note Fills

AN EDITOR’S OVERVIEW
Know Your History by Michael Parillo

It’s Questionable
• How Should I Tune My Snare?
• Mind Matters: Is Sexy Stage Wear Necessary?

Kit of the Month Clad in Plaid