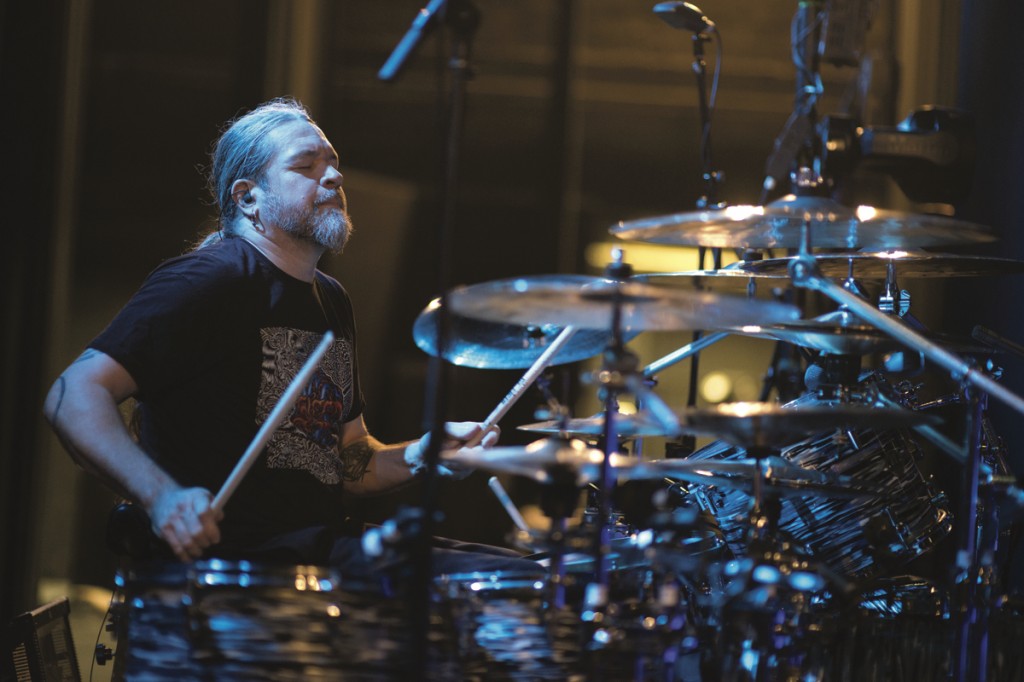 At the start of their North American tour, most of the members of Meshuggah had caught the same cold. We met up with drummer Tomas Haake before the band’s NYC show at Roseland Ballroom on February 15th to talk shop and to discuss how weirdly the tour had kicked off.

Tomas: Yeah it is, on a bus especially. Once one gets something, everyone gets it. You’re just too much in each other’s faces.

MD: Your singer wasn’t able to perform a few shows.

Tomas: Yeah, he had a severe viral infection to his throat and vocal chords. Since we play to a click track, we had live recordings from tour and rehearsals, so we were able to use his tracks for the show even though he wasn’t there.

Tomas: Yeah, we argued for hours about the best thing to do. Should we have the vocals or just do it instrumental? You don’t want to piss off the fans, but on the other hand we had to decide if it was going to be cheesy to have the vocals on a backing track. Some songs you can get away with doing instrumentally, because there’s so much going on. But the music is written so heavily around the vocals that you really need them there or else it gets boring. We chose to go with the backing track, and the fans were really appreciative that we didn’t cancel the shows.

MD: Was it weird not having him there physically?

Tomas: It was hard to feel motivated and be engaged. It helped to have the vocals in the in-ears, and I tried to just forget that he wasn’t there. Him being there adds another dimension to the band. People expect to see his stances and moves—his physical presence. Also there were no introductions to the songs. It was just kind of quiet between songs as we were waiting for the next count-off. We gotta play, though. We can’t cancel shows. We can’t afford it, for one thing, and we’re not going to do that to the fans either.

MD: How has the music evolved since your last album, ObZen?

Tomas: There is always a gradual change from each album to the next. I think with age you look on your own music in a different way. Look at the extremes between Koloss and the first album. In that first album, you hear that kind of nervous energy of wanting to put so much stuff into every song. You want everyone in the band to shine. We pushed so many different riffs and rhythmic ideas into one song that it hardly becomes a song. We have matured since then and are trying more and more to write for the good of the song and to try to get a groove. That’s really hard to do, especially with the thick guitars that take up the whole spectrum. For instance, the ghost notes that are really important for some songs just get lost in the mix and only the big hits come out. So we definitely tried for a more organic sound, and we wanted the groove to come through. It has become less about technicality.

MD: The rhythms the band plays are quite complex. How do you differentiate the groove from song to song?

Tomas: That is just one of those things that you learn with time. Sometimes it’s difficult to go from one type of song to a different type of song, like the track “Break Those Bones Whose Sinews Gave It Motion,” from Koloss, which is slower and has more of a single-kick groove. From that, we go into “New Millennium Cyanide Christ,” which is quite hectic, with a lot of broken-up bass drum patterns. Some nights it takes twenty seconds or so to really sink into the groove. So we try to build a set, tempo-wise, for it to go up in bpm instead of the other way.

MD: What do you practice for double bass stamina?

Tomas: Other than playing and rehearsing, I don’t have a practice routine for anything. Whenever we have time off, I try to play the kit three to four times a week for like an hour or so. And it’s usually kind of just setting up and messing with the kit. The kit I’m playing is done for the band. I don’t have a ride cymbal. It’s just big crashes and Chinas. So I’ll change up the kit just to play around. I don’t think I have stamina like some other metal drummers. I can’t go for 16th notes at super-fast tempos for a long period of time. My legs would burn up.

MD: There are some songs on the new album that have some heavy double bass for long periods of time.

Tomas: We don’t do the song “The Demon’s Name Is Surveillance.” We started practicing it, and it got to where I could play the whole song without dying. But it’s not just me; it’s everyone. The guitarists’ wrists cramp up. We’re all in our forties now, and it’s like “F*ck that song.”

When it comes to stamina, it’s all about rehearsing until we can play it live. It was the same thing with “Bleed.” When we started rehearsing that song, everyone was hurting and cursing about their limbs cramping up. We eventually got over it and are able to play the whole thing. But there are so many songs that we want to play, so playing “The Demon’s Name Is Surveillance” isn’t as important for us.

MD: Your hand and foot patterns are quite intricate. How do you come up with them?

Tomas: Sometimes it’s the hands doing the riff. Sometimes it’s the feet doing the riff, and the hands are going straight over it. One misconception, however, is that I write these parts. Whoever writes the song also writes the drum parts. Usually not a lot is changed in those drum parts except for the fills. There have been a couple occasions where I simply can’t play what was written; it’s just too weird. So we change it up to make it playable. But the guys all write on computers, and I emulate what they have written. This sometimes makes for awkward drumming, but at the same time it makes for a great challenge and an obstacle to overcome. It really keeps me on my toes.

For a detailed look at Haake’s touring kit, check out the Gearing Up feature in the July 2013 issue of Modern Drummer.