A gentler, more mature Carter Beauford? Well… He might be reining in the notes on record these days, but live, the Dave Matthews Band drummer is still letting it all hang out. 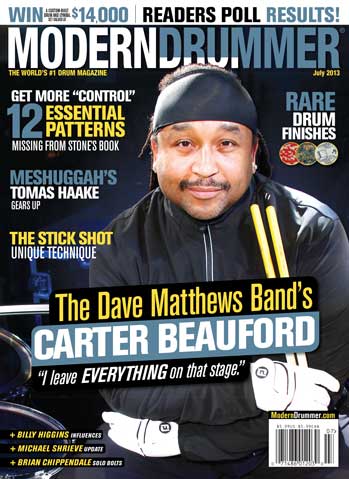 Shop Talk
The Good, the Bad, and the Ugly The Roaring Twenties brought unprecedented color to every aspect of American culture—including drumset finishes. Here’s a glimpse at that explosion of style.

Influences
Billy Higgins His playing worked perfectly in musical situations ranging from the reserved and traditional to the bold and brazen. And he always stayed true to himself.

2013 Modern Drummer Readers Poll Results
The top players of today, as voted by the most educated drummers on the planet. (Psst: That would be you!)

From the Past Classical Roots, Part 4: Harry Partch
An iconoclast of the highest order, he dispensed with traditional notions and created his own sonic universe.

Portraits
Brian Chippendale Lightning Bolt’s drummer holds legendary status among fans of the raw, confrontational wing of indie rock. So why is he so interested in copping Rihanna beats these days?

In the Studio
Seeing Sounds Part 2: The Deep, Fat “Thud”

AN EDITOR’S OVERVIEW
Believe in You! by Billy Amendola

Kit of the Month Hale, Animal!